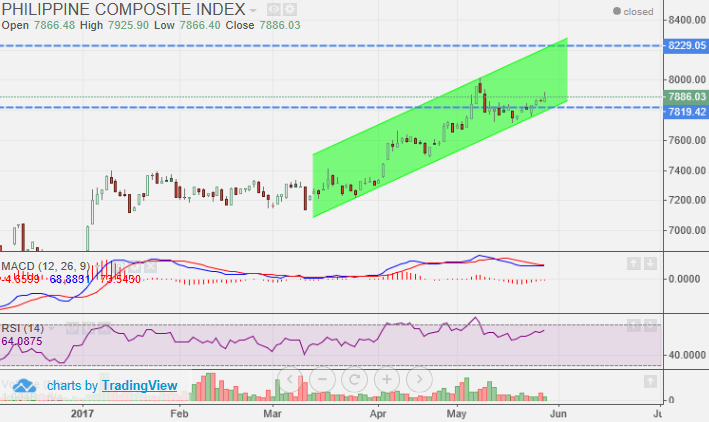 News Highlights: San Miguel Corp. (SMC) is looking to submit to the gov't an unsolicited proposal to build a $2bn flood control and waste-to-energy project. On the economic front, the Bangko Sentral ng Pilipinas (BSP) is sset to further liberalize micro-banking offices (MBOs), which will allow them to operate as small branch with additional functions other than microlending. Meanwhile, the debt of the national government increased by 8.3% to P6.3tn in April, amid higher domestic and foreign obligations.

Market welcomes EAGLE, PSEi @7,886: Net foreign inflows buoyed local shares, with PSEi gaining 18 points to 7,886 (+0.24% day-on-day). As the market welcomed EAGLE, some investors took the chance to bag in gains after it reached P16.12, leaving it with a 2% uptick on its first day of listing. Meanwhile, among activelytraded shares were: EAGLE (+P0.30 at P15.30); ALI (+P0.60 at P40.60); and MEG (+P0.09 at P4.71), on P8.6bn turnover. Gainers-losers were equal, 95-95, with net foreign buying clocking in at P674mn.
Scout for good opportunities: Lackluster trading is still expected today, with no leading indications from market leaders like the US and China. Some might opt to look for trading opportunities within the local bourse, leaving room for some liquidity on today’s market. Scout for bargains and take advantage of the dips. Immediate support, 7,850, resistance 7,920.

Slow day on a Monday: Most marts ended marginally lower while China, Taiwan, UK and US are closed for the holidays. Monday trading was slow with no news driving market momentum.

On a holiday: Market is closed in observance of Memorial Day.

Barely unchanged: Oil futures remained flat as investors wait for clearer indications on the post-OPEC meeting and the data on US crude inventory. Market was expected to be thin amidst the US holidays. West Texas Intermediate (WTI) for July delivery ended $0.07 higher at $49.87/barrel.

First Philippine Holdings (FPH) earmarks P10bn over the next 5 years for green redevelopment
project of its real estate assets. Among the properties are the old Benpres Building property in Ortigas, which will be transformed into an ecofriendly and energy efficient building with wide open spaces, plenty of greenery and a good mix of tenants — for office and commercial purposes, as well as real estate assets in Taytay and Antipolo, Rizal.

Real estate developer Cebu Landmasters, Inc. (CLI) P2.9bn offering was oversubscribed, amid strong demand from institutions and retail clients. The company's over-allotment portion was also sold, as the company is set to allocate proceeds for expansion, such as land bank acquisitions. CLI is set to list their shares on 02 June at an offer price of P5.00 per share.

The Bangko Sentral ng Pilipinas (BSP) is set to further liberalize micro-banking offices (MBOs), which will allow them to operate as small branch with additional functions other than microlending. MBOs will be allowed to expand their functions to perform micro-deposits, micro-loans, microinsurance, foreign currency, bills payments, among others.

The debt of the national government increased by 8.3% to P6.3tn in April, amid higher domestic and foreign obligations. Data from the Bureau of the Treasury (BoT) indicated a 10.4% increase in domestic debt to P4.16tn mainly due to the issuance of retail treasury bonds (RTBs). The bureau expects the national debt to increase further as the government lays out social and infra plans. On the other hand, foreign debt reached P3.21tn, 4.5% higher YoY on the back of the revaluation in third currency-denominated debt.

The Department of Finance will submit the second tranche of the Comprehensive Tax Reform Program (CTRP) to the Congress by Q4. The second package seeks to decrease the corporate income tax to 25%, from the current 30%, and rationalize fiscal incentives.

The launch of Wholesale Electricity Spot Market (WESM) in Mindanao would push through as planned despite the armed conflict in Marawi City. The launching on 26 June would trigger the start of the trial operations period, aiding to determine the readiness of the trading participants (TPs), system operator and market operator. Commercial operations would only commence once all conditions are met during the trial operations.