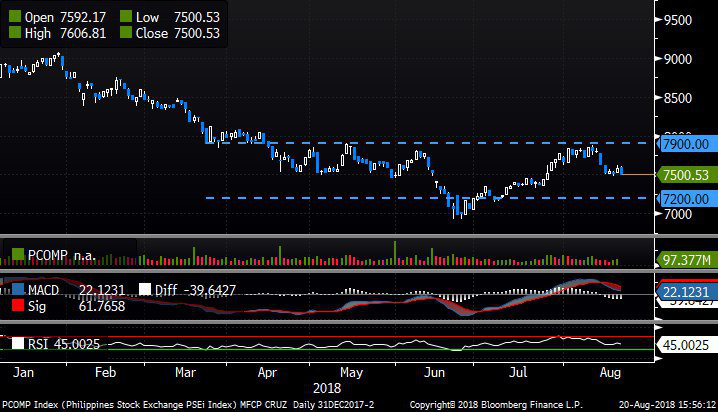 DMCI Holdings, Inc. (DMC) has a tie-up with an undisclosed Japan JV firm for the 1st phase of North-South Commuter Rail project covering Malls, Bulacan & Tutuban. Funding will be partly financed by Japan’s 242bn yen ODA signed in Nov. 2015 & will use seismic designs to make it disaster-resilient.

Ayala Corp. (AC)’s fully-owned AC Infra Holdings signed an investment agreement to invest in a firm that would provide fulfillment solutions services, subject to certain closing conditions. No other details were given.

SM Investments Corp. (SM) plans to get 35% of freight forwarding & e-commerce enterprise, Airspeed Int’l. Corp., but nothing has been finalised yet. SM made its foray in logistics through the purchase of 34.5% in 2Go Group.

In response to an article alleging the retirement of the bank’s chief, Philippine National Bank (PNB)’s board said they have not approved any such retirement of PNB Pres. Reynaldo Maclang. The search however, has started for a new president that will have the ‘intestinal fortitude’ to contend with internal politics & various factions of the Lucio Tan Group of Companies.

No bids submitted for Manila lot:

HSBC CEO Jose Arnulfo ‘Wick’ Veloso stepped down from his role as chief of the bank. Unnamed sources claimed he might be considering PNB or RCB, as these banks are looking for new CEOs. RCB’s Gil Buenaventura is also stepping down soon.

Finance chief Dominguez supported SB44 of Lacson, HB2207 of Arroyo & HB68 of Salceda, calling for reforms on real property valuation. The bills cover transparent valuation system & set up of electronic database, among others.

Compliance in Boracay for reopening only 30%:

Only a third of 440 hotels, resorts & inns in Boracay are ready to reopen on 26 Oct., according to Interior USec. Sensing. Establishments would only be allowed to reopen if they have connected to the main sewer line of the island, or have their own sewage treatment facilities.

PCC says return of frequency should be mandatory:

Phil. Competition Commission (PCC) said mandatory return of frequencies would apply even if the 3rd telco player already surpassed its commitment period of more than 5 years. This would apply if the new player becomes a related party to either GLO or TEL, or it becomes an affiliate. Under the draft rule, returning the assigned frequency is ‘voluntary’ on the new player, but for PCC, it should be mandatory.