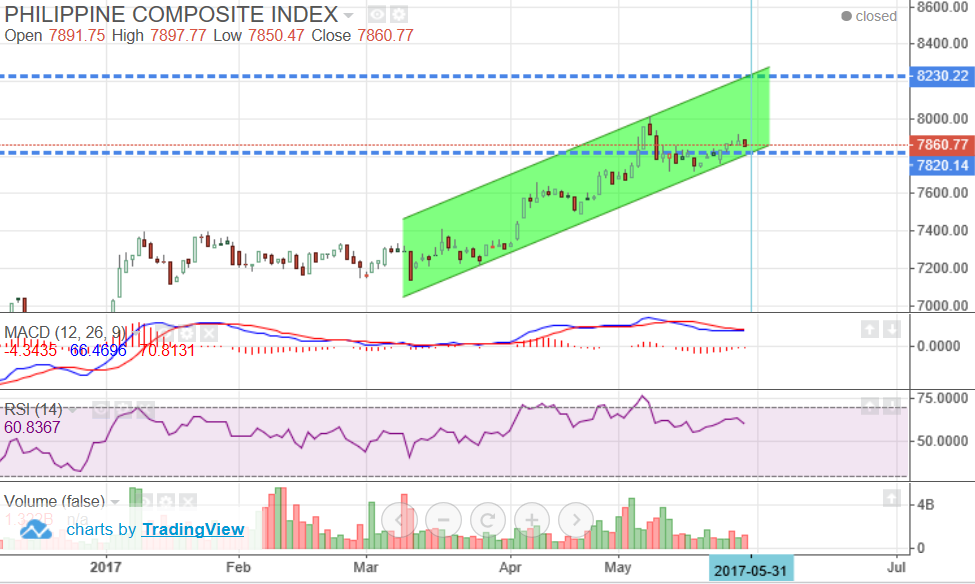 Mart slipped amid portfolio repositioning, PSEi @7,860: Local bourse declined as some investors repositioned their holdings amid month-end window dressing, while others stayed liquid ahead of Cebu Landmasters’ (CLI) listing. PSEi dipped 25 points to 7,860 (-0.32% day-on-day), with sectors ending in red, save for services (+0.28%). Among actively-traded shares were: SMPH (unch at P33.50); ALI (-P0.45 at P40.15); and WLCON (+P0.29 at P5.70), on P7.39bn turnover. Losers outnumbered gainers, 105-77, with net foreign buying at P572mn.
Sideways with a downward bias to continue: Wait-and-see stance among investors are likely to continue as US jobs data, which could determine the fate of the US policy rates moving forward, is yet to be released. Moreover, some might opt to cash in gains and remain liquid ahead of the listing of Cebu Landmasters (CLI) on 02 June. Immediate support 7,820, resistance 7,930.

Bourses lower amid cautious trading: Marts ended in negative territory as some investors traded cautiously, while others sought for safe haven assets.

SM’s new logistics arm may be its 4th pillar:

ALI’s ALP to launch its 8th subdivision project in Nuvali:

MER to invest in Indonesia and Nigeria:

Manila Electric (MER) eyes investment opportunities in Indonesia and Nigeria, a move to expand overseas. The Indonesian investment would be through CIS Bayad Center in partnership with Densan System Co. Ltd. of Japan, while MER looks into other projects aside from technical partnership with Nigeria's Ibadan Electric Distribution Utility.

PLDT Inc. (TEL) and Globe Telecom (GLO) completed the last tranche of payments for its P69.1bn joint purchase of San Miguel Corp.’s (SMC) telco assets despite the pending petition filed by the Philippine Competition Commission (PCC) to the Supreme Court.

San Miguel Brewery to build facility in US:

San Miguel Brewery Inc. plans to build a $150mn brewery in Los Angeles, California. The firm also eyes to invest around $500mn over the next 2 and a half years to build 2 new beer plants and expand the capacity of all existing bottling plants. The firm is a joint venture between San Miguel (SMC) and Kirin Holdings Co. Ltd. of Japan.

SBS Philippines (SBS) unit, SBS Holdings and Enterprises Corp. acquired 150,000 common shares of Goldchester Holdings, translating to a 17.65% equity stake in the company for a total consideration of P481mn. Goldchester Holdings is owner of a commercial-industrial complex comprising of buildings, other land improvements and land with a total area of 31,423.5sqm located along the north side of EDSA in Quezon City and adjacent to the LRT Roosevelt Station and across the Cloverleaf Balintawak property.

Mober, a delivery-on-demand service provider, eyes to debut in the equities market by 2020 as it ramps up its presence and coverage nationwide. Starting this year, it plans to raise $1mn to finance its nationwide expansion focused on further developing its product and recruiting at least 500 van partners. On a side note, Mober founder and CEO Dennis Ng also said that he is also open for backdoor listing opportunities.

Philippine banks released P397.05bn in automobile loans as of the end of 1Q17. This was 27% higher YoY and accounted for 5.4% of the P661.4bn total consumer loans. The increase came ahead of the DoF’s proposal to raise the excise taxes on cars.

Power Sectors Assets and Liabilities Management Corp. (PSALM) announced that 3 bidders passed the pre-qualification process for the 850MW Sucat Thermal Power Plant in Muntinlupa. These companies are Riverbend Consolidated Mining Corp., VPD Trading and G.G. Uy Bonapor Metal Contractor Co. Qualified bidders are allowed to participate in the bidding process and are expected to submit their offers on 31 May, Wednesday. Recall that PSALM was supposed to re-bid the Sucat facility last year but it had to wait for clearance from the Environment Department.