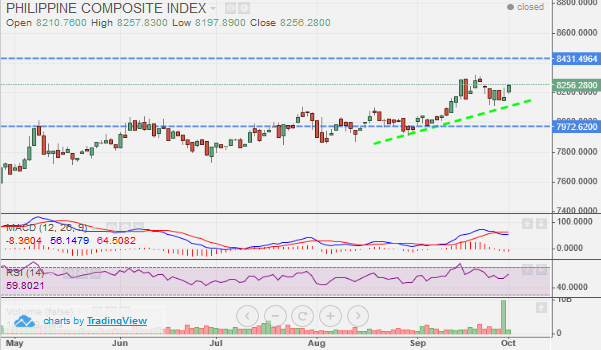 News Highlights: Megaworld (MEG) is building the regional corporate headquarters of FactSet, a global provider of integrated financial information, analytical applications, and industry-leading services. Meanwhile, the government plans to spend P500mn to improve Terminal 2 of the Ninoy Aquino International Airport (NAIA), which is now in the process of detailed engineering construction.

Marts up, PSEi @8,256: Local bourse edged higher, tracking mostly the gains from Wall Street and regional marts last Friday. PSEi scored 84 points higher to 8,256 (+1.04% day-on-day), with sectors mixed across the board. Meanwhile, among actively traded shares were: AGI (+P0.36 at P16.4), ALI (-P0.1 at P43.4), SM (+P14 at P897), SMPH (+P0.55 at P35), and EDC (-P0.11 at P5.51), on 7.41bn turnover. Gainers outperformed losers, 107-96, with net foreign selling at P271.46mn.
Tracking Wall Street gains: Local bourse might have some buying opportunities left following Wall Street record high performance. Moreover, expectations of strong 3Q performance might aid boost market sentiment. With no fresh catalyst in the local scene, market is still seen on a sideways trend. For now, we suggest to buy on dips, and be on the lookout for firms with higher upside potential. Immediate support, 8,200, resistance 8,300.

Shares higher despite Las Vegas incident: Equities settled in their record highs, attributed to expectations of strong 3Q earnings and optimism on Pres. Trump’s tax overhaul proposal. Market was seen to shrug off the massacre in Last Vegas, in which a lone gunman killed at least 58 people and more than 500 injured late Sunday.

Oil dropped gains: Crude futures fell amid pressures from a stronger dollar and the latest data showing a decline in OPEC’s compliance and a weekly rise in active US oil rigs. November West Texas Intermediate (WTI) fell $1.09 to $50.58/barrel.

Megaworld (MEG) is building the regional corporate headquarters of FactSet, a global provider of integrated financial information, analytical applications, and industry-leading services. The P3bn office tower will be 17-storeys high, offering 48,000 sqm of office spaces in Fort Bonifacio. The project is set to be completed in 2020.

UBP to issue LTNCD and EMTN:

Philippines AirAsia plans to hold its initial public offering in the middle of 2018, with the proceeds to be used to support the expansion of operations. The plan is to raise $250mn from the IPO. For next year, AirAsia aims to have 26 aircraft, with 25 to be used for flights and one as reserve. For this year, the carrier expects to have 17 aircraft by yearend from just 13 at the beginning of the year.

The government plans to spend P500mn to improve Terminal 2 of the Ninoy Aquino International Airport (NAIA), which is now in the process of detailed engineering construction. The government, though, is yet to make a decision on Philippine Airlines’ (PAL) proposal to expand Terminal 2 with a P20bn worth new annex building, which could house 12 to 15 million passenger terminals.

Riding on the admin’s ‘Build, Build, Build’ agenda, the Japan International Cooperation Agency (JICA) and the National Economic Development Authority (NEDA) will be releasing next month the results of a 2014 roadmap study on strategies and solutions to the metro’s traffic woes. The roadmap covered Metro Manila, Region III (Central Luzon) and Region IV-A (Calabarzon).

The Bureau of Internal Revenue (BIR) said it is targeting to enlist 6,000 taxpayers, comprised of the top 500 individual and corporate taxpayers in 12 regional offices, into its newly developed Medium Taxpayers Segment. BIR said medium taxpayers are estimated to comprise about 19% of the BIR’s total tax collections in the future.

The Department of Finance (DoF) estimates that the Senate’s version of the tax reform bill may yield P59.9bn additional revenues in the first year of its implementation, way below the projected revenue of P133.8bn programmed in the 2018 national budget.