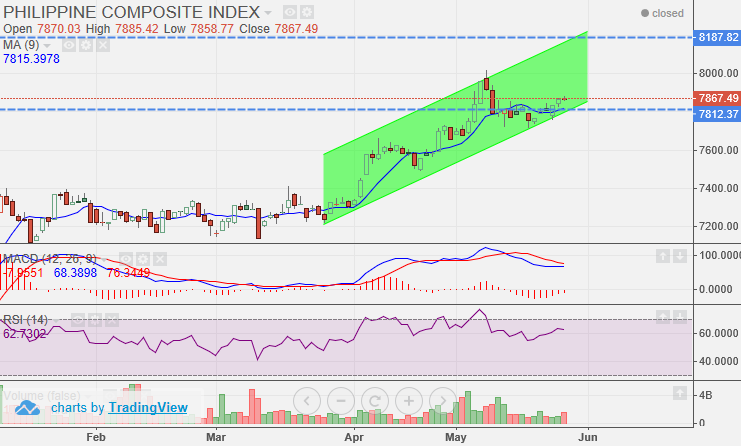 News Highlights: The government's decision to favor official development assistance loans over public-private partnerships to finance infra-related projects could result to higher state debt according to San Miguel (SMC). Meanwhile, Alsons Consolidated Resources (ACR) eyes investment in Sulawesi, Indonesia as part of its international expansion plans. The move was beneficial amid its close proximity to Mindanao.

Mart closed lower on weak OPEC outcome, PSEi @7,867: Local bourse ended its five-day win streak as investors bagged some profits from the previous sessions’ gains. Also, the outcome of OPEC-led decision to extend output cuts until March 2018 did not go well among investors. PSEi dipped 4 points to close at 7,867 (-0.05% day-on-day), as sectors finished on a mixed session. Among actively-traded shares were: ALI (+P0.10 at P40.00); SHLPH (-P2.75 at P64.20); and MEG (+P0.14 at P4.62), on P8.09bn turnover. Winners outlasted losers, 100-94, while net foreign outflows reached P637.2mn.
Might trade sideways: Local bourse might trade sideways with a downward bias as market might wait for further catalysts to spur market activity. Meanwhile, the outcome of G-7 meeting will be in focus, especially on the trade agreements. Lastly, the latest missile launch from North Korea could raise another geopolitical tensions among neighboring countries like South Korea and Japan. Immediate support 7,780, resistance 7,900.

Bourses lower on the OPEC meeting aftermath: Marts across the region closed mostly lower as investors were disappointed on OPEC’s decision to extend the output deal for another nine months.

Equities ended mixed ahead of Memorial Day: Shares for Nasdaq and S&P snapped a six-day winning streak after digesting some economic data. The second reading of US GDP grew at a rate of 1.2%, ahead of the 0.9% estimate. Markets will be closed on Monday in commemoration of Memorial Day.

Crude rebounded after sharp decline: Oil prices rebound after the nearly 5% drop from the previous session, as the OPEC-led decision to extend output cuts was not warmly received by the investors. West Texas Intermediate (WTI) added $0.90 to $49.80/barrel.

Alsons Consolidated Resources (ACR) eyes investment in Sulawesi, Indonesia as part of its international expansion plans. The move was beneficial amid its close proximity to Mindanao. Moreover, the Indonesia's government push to encourage migration to Sulawesi Borneo area meant higher potential to develop infrastructure. Meanwhile, ACR is also in talks with new partners for its venture into hydropower. ACR plans to build a 15.1MW run-of-river hydropower plant in Siguil, Sarangani province, with target completion by 2H of 2020.

Maynilad Water Services would spend around P146mn to rehabilitate and upgrade 3 pumping stations in Manila to ensure water service reliability in the area. The project would involve the refurbishment of several old and defective pumps and installment of variable frequency drives on the refurbished pumps during the rehabilitation of the facilities. Project is target to be complete by end-2017, with 3 pumping stations fully automated.

Offshore gaming firms among the drivers for office space:

A real estate services firm and international property consultants called Pronove Tai said the offshore gaming companies accounted for 20% or 56k sqm of the pre-leased office space set to be completed in 2Q17.

The national government spent P50.7bn for capital outlays in April 2017, up by 1.3% from the P50.1bn same month last year. On a year-to-date basis, the total amount spent for infrastructure from January to April fell 1.5% to P192.9bn. Capital outlays for April were buoyed by capital transfer to local government units (LGUs), which grew more than two-fold to P17.2bn from P7.4bn last year. Meanwhile, actual infrastructure projects and other capital outlays saw a 21.2% decrease during the month of April to P33.5bnfrom P42.5bn last year.

The Department of Finance (DoF) is keen on converting the Development Bank of the Philippines (DBP) into the infrastructure bank before the end of 2017. Another plan is to transfer the operations of the DoF’s Municipal Development Fund Office (MDFO) to the DBP to jumpstart its move towards being an infrastructure bank.

REIT to be revived:

The new PSE head, Ramon S. Monzon, is planning to revive the real estate investment trust (REIT), which has not taken off since passed into law in December 2009. The BIR is expected to come up with a compromise on ownership and taxation issues in 2 months.