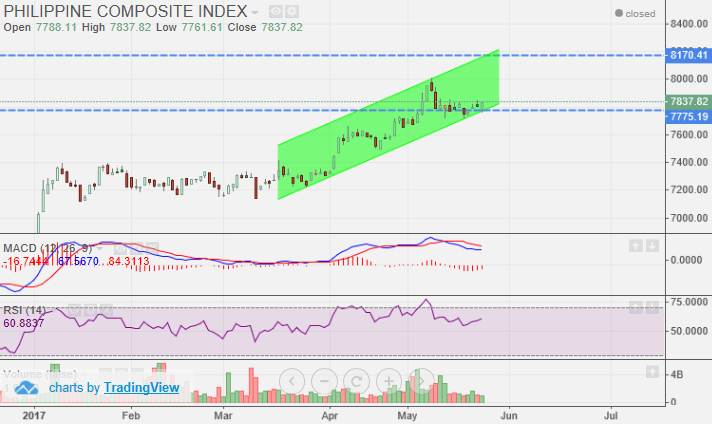 Mart shrugged off Martial Law concerns, PSEi @7,837: Local bourse managed to end in green as Mindanao Martial Law eased. PSEi rose 25 points to 7,832 (+0.33% day-on-day), with sectors ending mixed. Among actively-traded shares: URC (+P4.90 at P170.00); SCC (-P2.00 at P158.80); and ALI (+P0.85 at P38.95), on P5.90bn turnover. Losers still outnumbered gainers, 97-94, with net foreign buying at P452mn.
Might continue to trade higher: Mart is likely to trade higher as investors are likely to switch their focus on the FOMC meeting minutes released overnight. Optimism on the economic growth in the US and possible extension of crude output cuts could provide ease and spur the market higher. Immediate support 7,760, resistance 7,900.

Equities up following the release of FOMC minutes: Shares ended with gains as minutes from the FOMC meeting showed agreement on shrinking Fed's balance sheet and raising interest rates next month.

Crude down ahead of OPEC meeting: Oil futures prices declined as traders wait on the sidelines ahead of the OPEC meeting on 25 May. West Texas Intermediate (WTI) fell $0.11 to $51.36/barrel.

Phoenix Petroleum (PNX) acquired the local unit of Petroliam Nasional Berhad or Petronas, the national oil company of Malaysia. PNX board approved the execution of understanding with PDB (Netherlands) B.V., a wholly-owned subsidiary of Petronas Dagangan Berhad for the 100% share acquisition of Petronas Energy Philippines Inc. and Duta Inc. The planned acquisition is subject to the approval of the Philippine Competition Commission.

Cebu Air, Inc. (CEB) thru its trading name, Cebu Pacific suspended 3 flights to the Middle East, which are no longer commercially viable. Services to and from Riyadh, Saudi Arabia; Kuwait; and Doha, Qatar would be suspended starting June. Affected passengers due to cancellation are being contacted and provided options to minimize disruptions.

Eagle Cement Corp. (EAGLE) received strong demand from investors as it is three times oversubscribed. The underwriter added that the take up came from the company's sound financials and aggressive expansion plan. Most of the proceeds from the IPO will be used to finance the construction of Cebu cement plant which is expected to be completed around 1Q 2020.

Philippines and China inked 6 investment projects during the Guangxi-Philippines Business Matching Seminar for Entrepreneurs in Makati yesterday. The seminar served as a venue for bilateral agreement on both countries. Projects involve ventures in energy, logistics, and laterite nickel ore exportation.

'Sugar tax' could hike prices of affected products up to 140%:

Data from the Department of Finance (DOF) showed that the implementation of House Bill 5636 or Tax Reform for Acceleration and Inclusion (TRAIN) Act could drive prices of sugar-sweetened beverages by 2% to as much as 140%. The DOF added that carbonated drinks could experience a 36% increase from their current prices. Under the Section 150-A of the bill, sugar sweetened beverages will have an additional excise tax of P10 per liter.

The Energy Department (DoE) wrote a letter to the Secretary of National Defense to help secure energy facilities in Mindanao and other vulnerable areas nationwide. Meanwhile, National Grid Corporation (NGCP) is closely monitoring Mindanao’s power supply, and is already preparing contingency plans for the next 60 days.