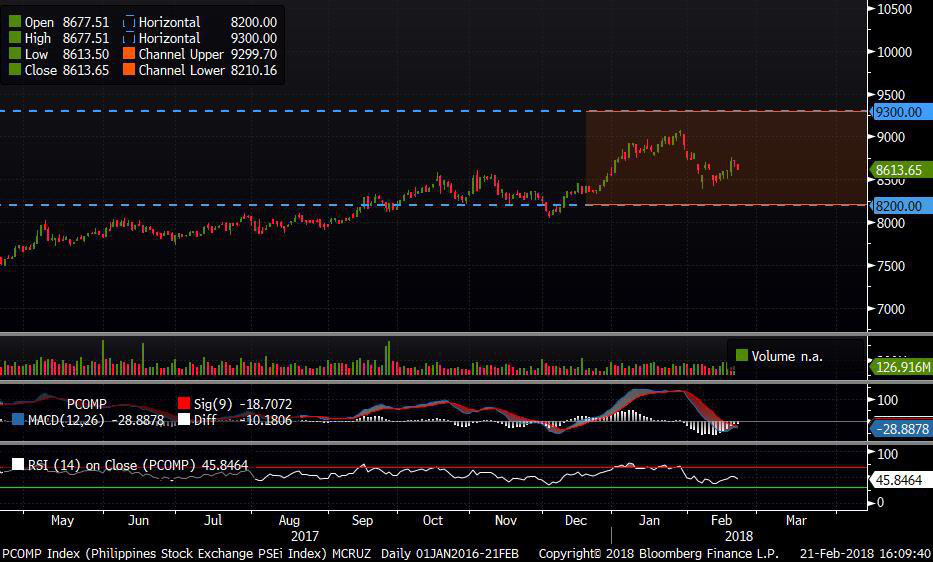 Ayala Land, Inc. (ALI) board approved to raise P20bn via retail bonds & bilateral term loan(s) to partly finance general corporate requirements. ALI will also raise up to P5bn through the issuance of Qualified Buyer Notes (QBN) with 5-year tenor to refinance its short-term loans. ALI also approved the grant of 13.68mn common shares at P45.07/share for its ESOP.

PAL Holdings, Inc. (PAL) deferred plans to build the P20bn annex to NAIA-2 with the proposed ‘super consortium’ to rehabilitate the whole airport system. PAL said they’re in talks with Pagcor where to build the annex & evaluation of the unsolicited proposal could take 2 months.

Pryce Corp. (PPC) sees 2018 earnings growing by 20% to P1.5bn with an expected 15% increase in sales volume. PPC also expects the expansion of its LPG terminals in Sogod, Cebu & Balingasag, Misamis Oriental to be finished by July & Aug. 2018.

Concepcion Industrial Corp. (CIC) formed Cortex Technologies to create rapid innovations across CIC firms on ideation, design & development of new products. This unit will leverage on the Internet of Things (IoT) that will provide consumers with solutions of convenience, control, efficiency & savings. Among the services include smart air conditioning.

The Phil. Competition Commission (PCC) plans to raise by June the P1bn threshold for reporting M&A deals. PCC is also preparing new rules on leniency to combat cartels by granting immunity from suit, among others. PCC also plans to put inspection guidelines that will authorise them to search business premises for records. PCC will also have rules on forbearance that will forbear from applying RA10667 provisions for a limited time on an entity, or group of entities that met specific, stringent conditions.

The Phil. gov’t. is looking at $500mn-$700mn Samurai bond float later this year, part of which could finance the budget. Also, dev’t. plans are being prepared for the 2,600sqm. Shibuya lot that will house the chancery of the Phil. Embassy of Japan.