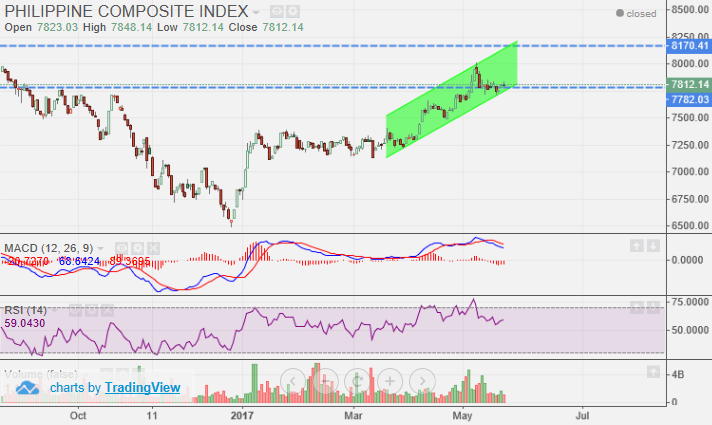 Mart higher buoyed by foreign buying, PSEi @7,812: Local benchmark inched higher buoyed by marginal foreign buying. PSEi closed 5 points up at 7,812 (+0.07% day-onday), with sectors ending in green territory, primed by mining and oil (+0.96%).
Among actively-traded shares were: MEG (+P0.10 at P4.45), AGI (+P0.26 at P15.24); and SMPH (unch at P32.80), on P7.41bn turnover. Losers managed to outnumber gainers, 97-93, with net foreign buying at P147mn. Sideways with a downward bias: Mart is seen to trade on a sideways path, possibly with a downward bias as sentiment might be dampened by the attack of Maute Group, which has pledged allegiance to ISIS, in Marawi City. Investors might turn cautious on making any big bets and wait first and take cue from any developments from the said incident. Immediate support 7,760, resistance 7,860.

Bourses mixed amid Manchester attack: Marts closed mixed with some benchmarks
focusing on the attack in Manchester, England.

Equities rose amid growth optimism: Shares ended higher following the White House’s release of its 2018 budget proposal and a 3% GDP growth estimate in 2021.

Crude up on optimism: Oil prices settled higher amid expectations that OPEC would extend its output cuts next year. West Texas Intermediate (WTI) rose $0.34 to close at $51.47/barrel.

Rizal Commercial Banking Corp. (RCB) has settled the balance of P500mn, part of the P1bn fine with the Bangko Sentral ng Pilipinas (BSP) ahead of the August deadline. The bank recognized the P1bn fine under miscellaneous expenses in its income statement.

Filinvest Land, Inc. (FLI) is set to open Fora Mall, its new shopping mall in Tagaytay City. The commercial development will have 48,000 sqm of leasable space, which will open by 2Q17. The mall is part of the 5.2ha Fora townscape project which will include a condotel.

Melco Crown (MCP) changed its name to Melco Resorts and Entertainment (Philippines) Corp., with a new stock symbol of MRP. This latest move will be effective on 30 May.

Vitarich Corp. (VITA) is eyeing to earn P300mn in profits for 2017, on the back of robust expansion across the country. VITA earned P18mn in net income during 2016, and is looking to increase its revenues to P6bn for 2017. The new animal feed mill in Davao, which is set to open by July, could help VITA double the capacity of its plant production.

GMA Network, Inc. (GMA7) will be allocating P800mn for the launching of its digital terrestrial
television (DTT) service and program rights acquisition. The DTT service will initially be available in Mega Manila, Cebu and Davao by first half of 2017. The broadcasting company will offer at least four digital TV channels.

Cebu Landmasters (CLI) has signed a deal for the conversion and development of the 18-ha Matina Golf Course into a CBD. Partnerships and outright sale of portions of the property to other developers are being considered. CLI is raising up to P2.9bn via IPO. Offer period ends on May 26, listing is set on June 2.

The Department of Transportation (DoTr) has terminated the public-private partnership (PPP) offer for 5 regional airport projects (Panglao, Davao, Iloilo, Laguindian and Bacolod). Instead of going through PPP mode, each airport will be pursued using official development assistance (ODA) or general appropriations act (GAA) funding. This way, implementation would be faster.

The Bureau of Customs (BOC) reported P32.6bn in collections during April, short of the P36.4bn target. Manila International Container Port was the top performing port, contributing P9.3bn in collections, followed by port of Batangas at P7.2bn.

Martial Law in effect in Mindanao: