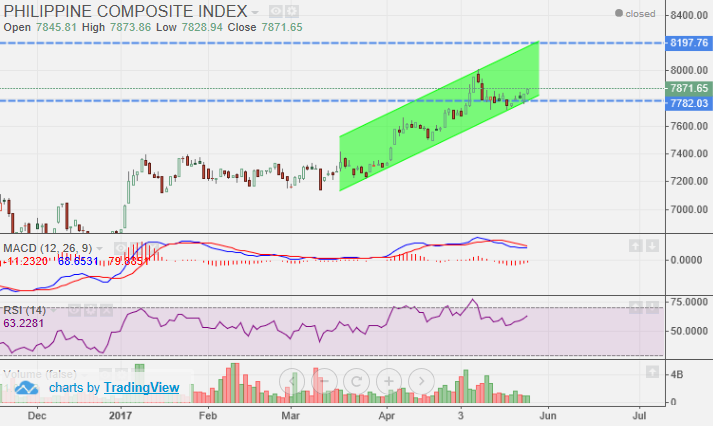 News Highlights: PLDT Inc.’s (TEL) “BBB+” long-term corporate credit rating and “aXA+” long-term ASEAN regional scale score were affirmed by Standard & Poor’s Rating Services (S&P). San Miguel Corp. (SMC) is planning to construct a $700mn new integrated packaging plant in the next two months in its 2,000ha industrial estate in Davao. Puregold Price Club (PGOLD) approved the consolidation of all of its stores catering to the same market group into one company. Meanwhile, the Department of Trade and Industry (DTI) sees foreign direct investments (FDI) reaching between $10bn-$11bn this year due to strong interest of Chinese companies in the country and the new foreign policy of the government.

Mart extends gains despite Mindanao Martial Law, PSEi @7,871: Local bourse remains unfazed following the declaration of Martial Law in Mindanao. PSEi added 33 points to close at 7,871 (+0.43% day-on-day), as sectors continued to end mixed. Among actively-traded shares were: ALI (+P0.95 at P39.90); GTCAP (+P15.00 at P1,200.00); and AC (-P3.00 at P867.00), on P6.49bn turnover. Bulls have outrun the bears, 103-84, with net foreign buying at P527.5mn.
Might take profits: Local bourse might trade slightly lower as investors could take profits coming from the previous sessions’ gains. Also, the outcome of the OPEC meeting could push the prices of oil-related stocks lower, as the OPEC agreed to extend production cuts for another nine months. Immediate support 7,800, resistance 7,930.

Bourses higher on Fed minutes: Marts across the region finished in green after the US Fed minutes upheld the Monetary Board’s hawkish stance, citing that an interest rate hike could happen soon.

Crude tumbled on OPEC deal woes: Oil prices declined sharply after OPEC and non-OPEC members agreed to extend the current output cut deal for another nine months until March 2018. However, the deal did not go well for investors, whom were expecting deeper cuts among the crude cartel. West Texas Intermediate (WTI) shed $2.46 to $48.90/barrel.

SMC to put up $700mn packaging plant in Davao:

San Miguel Corp. (SMC) is planning to construct a $700mn new integrated packaging plant in the next two months in its 2,000ha industrial estate in Davao. The plant is expected to produce pallets and crates as well as a larger carton converting plant and is seen to be completed in 2 years.

Puregold Price Club (PGOLD) approved the consolidation of all of its stores catering to the same market group into one company. This move would allow PGOLD to have better inventory management, efficient cash management and simplified reporting to government agencies. Companies included in the merger are: Daily Commodities, First Lane Super Traders Co., and Goldtempo Company Inc.

DD plans to raise as much as P9.7bn from bond offer:

DoubleDragon Properties Corp. (DD) is looking to raise up to P9.7bn (including P3.2bn oversubscription) from the issuance of 7-year fixed rate retail bonds. A preliminary prospectus has already been filed with the SEC.

After the Martial Law declaration in Mindanao, Philippine Airlines (PAL) is now receiving cancellation and rebooking requests for flights in the southern island. PAL sees a short-term drag on revenues, but remained optimistic that this could bring a longer term of peace & order in Mindanao.

International Container Terminal Services (ICT) terminated its 21-year contract in Nigeria following a delay in project implementation. The parties arrived at this decision following delays in the execution of the Lekki Port Project. The termination was finalized and effective as of 24 May 2017.

Ginebra San Miguel (GSMI) reported 139% growth in net income at P129mn, with revenues reaching P5.1bn (+31%) as volumes increased 32%. The growth was on the back of the company's marketing efforts, which is geared towards solidifying customer retention.

Department of Trade and Industry (DTI) sees foreign direct investments (FDI) reaching between $10bn-$11bn this year due to strong interest of Chinese companies in the country and the new foreign policy of the government. This estimate translates to a growth of up to 39% from 2016, exceeding the central bank's (BSP) revised target of $8bn.

The Philippines-Russia meeting closed 10 deals centered in cooperation in the fields of agriculture, defense, humanitarian issues, industry, nuclear energy, transportation, trade and tourism. Foreign Affairs (DFA) chief Alan Cayetano added that neither country sought a military alliance, and clarified that the military equipment the government eyes on would only be used for counter-terrorism.