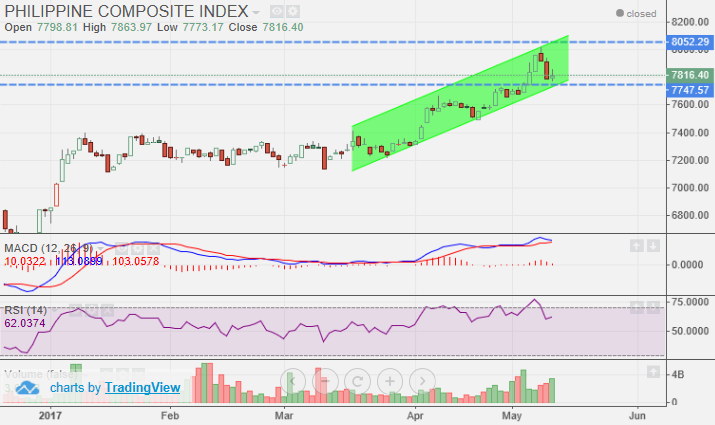 Equities fell on weak retail earnings: Shares closed lower as investors digest weak earnings results from retail companies such as Macy’s. On the other hand, jobless claims reached 236,000, lower than the 245,000 estimate.

Crude rallied anew on lower US inventories: Oil prices inched higher as US stockpiles continue to decline amid lower imports. Investors are also optimistic that OPEC would agree to extend the deal to cut output, as Iraq and Algeria have already their support. West Texas Intermediate (WTI) added $0.50 to settle at $47.83/barrel.

DMCI Holdings (DMC) booked 26% jump in Q1 net income at P3.7bn driven by strong performance of Semirara Mining and Power (SCC). Including the P111mn one-time gain in 2016 for the partial sale of its stake in Subic Water, net income improved by 22%. SCC reported 52% growth in Q1 net income to P4.42bn primarily due to the 24% increase in coal sales volume and 41% upturn in average coal prices, which translates to P2.51bn (+53%) net income contribution to DMC.

LT Group (LTG) unit, Asia Brewery opened its soy milk beverage manufacturing plant, AB Nutribev, in Santa Rosa City, Laguna. This plant is the first manufacturing facility to produc Vitamilk outside Thailand and the first in the country to introduce the most advanced technology.

The central bank (BSP) decided to keep benchmark interest rates steady, stating that inflation would remain manageable and fall within the 2%-4% target. Overnight lending facility was maintained at 3.5%, as well as the overnight reverse repurchase facility at 3% and 2.5% for the overnight deposit facility. Reserve requirement was also unchanged at 20%.

Malacañang assured that the current administration has been working double time to improve infrastructure through the "Build, Build, Build" program after a data showed that the country ranked 24th out of 41 countries in terms of access to infrastructure. This program aims to construct a network of roads, bridges, railways, and airports.