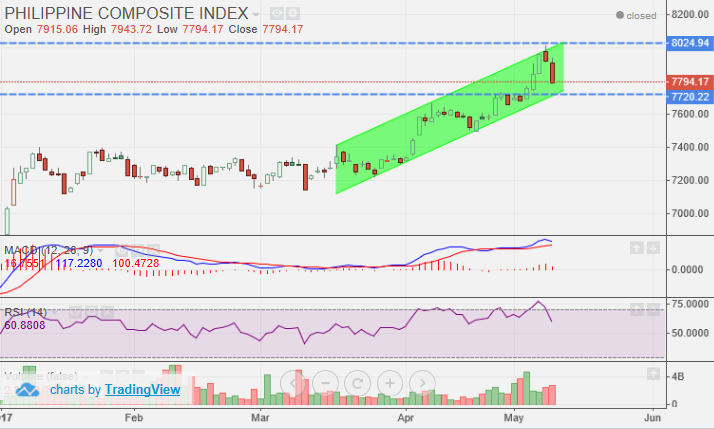 News Highlights: Globe Telecom, Inc. (GLO) disclosed a core net income of P3.68bn for 1Q17, down 12% YoY, while SM Investments (SM) 1Q17 net income grew to P7.7bn (+8%) on the back of steady profit margins across its core business segments, with revenues also showing an 8% increase at P84.5bn. Meanwhile, San Miguel Corporation (SMC) grew its net income by 2% to P13.54bn during the first three months of 2017. However, the growth would have surged by 62% upon exclusion of the foreign exchange gains during the same period from P9.18bn to P14.8bn.

Profit-taking ensued, PSEi @7,794: The local bourse was pressured to push prices back to 8,000 mark as investors opted to bag gains with news on North Korean continuing its ballistic nuclear tests hanging on the sidelines. PSEi slumped 129 points to 7,794 (-1.63% day-on-day), with all sectors in red territory, led by holdings (-2.35%) and industrial (-1.63%). Actively-traded shares were: ALI (+P0.20 at P38.60); ALCO (+P0.05 at P1.44); and AC (-P23 at P860) on strong P10.4bn turnover. Losers outnumbered gainers, 133-78, with net foreign inflows reaching P540mn.
Hunt with caution: Market might rebound after its latest slump as investors hunt for bargain stocks. Overall, the domestic economy is showing signs of improving market conditions, which could provide relief for investors as they look for good prospects. However, investors might still want to heed caution with the latest turnout globally. Immediate support, 7,760, resistance 7,850.

Marts mixed on latest global news: Regional mart had a muted reaction on the latest firing of FBI Director James Comey. Across the board, profit-taking ensued as investors heeded caution as Moon Jae-in hinted a softer stance on North Korea.

Equities caught up on Comey dismissal: The unexpected firing of FBI Director James Comey continued to weigh on the overall market sentiment. This was, however, offset by gains from energy stocks amid the latest data report on crude stockpiles.

Globe Telecom, Inc. (GLO) disclosed a core net income of P3.68bn for 1Q17, down 12% YoY. This excludes forex, mark-to-market gains and losses and non-recurring items. Including non-core items, GLO’s net income declined 13% YoY to P3.76bn as the charges related to the SMC telco asset purchase were not present in 1Q16. Mobile subscribers grew 2% to 58.6mn while home broadband subscribers rose 8% to 1.19mn. Service revenues and EBITDA were up 4% to P31.1bn and 2% to P13.3bn, respectively. Note that data revenues (mobile data, home broadband and corporate data combined) now account for 53% (3ppts higher YoY) of GLO’s total service revenues. The industry remains challenging with tough competition and heavy capex requirements. We retain our HOLD rating for GLO and our target price of P2,100.

SM Investments (SM) 1Q17 net income grew to P7.7bn (+8%) on the back of steady profit margins across its core business segments, with revenues also showing an 8% increase at P84.5bn. Property, banks and retail accounted 44%, 35% and 22% of the group’s net income, respectively. After its two strategic acquisitions this year, SM eyes to invest in partners with leading positions, strong management and potential for high growth and attractive yields.

San Miguel Corporation (SMC) grew its net income by 2% to P13.54bn during the first three months of 2017. However, the growth would have surged by 62% upon exclusion of the foreign exchange gains during the same period from P9.18bn to P14.8bn. Also, the company decided to reduce its dollar-denominated debt by issuing peso-denominated debt. Revenues reached P195.8bn, 23% higher YoY, buoyed by its fuel & oil, infrastructure, packaging, core food and beverage businesses. However, SMC Global Power Holdings Corp., had a 3% setback in revenues to P19.4bn amid maintenance shutdown of Ilijan power plant.

Robinsons Land Corp. (RLC) reported an EBITDA of P2.92bn for 1Q17, a decline of 2% YoY and this was because of the 38% slide in residential development. Residential sales take up dropped 26%. In our view, more importance should be given to investment (malls, office, hotels), which grew by 8% in EBITDA in the same period. Investment portfolio accounts for 86% of RLC’s total EBITDA while development accounts for 14%.

Century Pacific Food (CNPF) reported 10% growth in net income at P701mn driven by 17% increase in revenues at P7.48bn. CNPF's original equipment manufacturer (OEM) segment saw its revenues increase by more than 40% on the back of continued recovery in the tuna export market.

SM Prime Holdings (SMPH) expands in Mindanao with the opening of SM CDO Downtown Premier in Cagayan de Oro (CDO) on 12 May. This mall, which is 87% leased awarded, will add about 178k sqm of gross floor area (GFA) to the total retail footprint. On top of the mall, there will be an 8-level office building that will cater to Business Process Outsourcing (BPO) companies. SMPH is scheduled to open 4 more malls in the country namely SM Cherry Antipolo in Rizal, SM Center Tuguegarao Downtown in Cagayan, SM City Puerto Princesa in Palawan and SM Center Lemery in Batangas this year.

Meralco (MER) said its customers should be expecting power rebates in the June billing period, or as soon as the Energy Regulatory Commission (ERC) approves MER’s petition to return P6.9bn worth of overcharges to next week. The petition covers overrecoveries for generation and transmission charges from January 2014 to December 2016.

FDI reached $1.1bn as of end-February:

Manufacturing output rose by 11.1% in March:

The Philippine Statistics Authority (PSA) reported an 11% growth in March, a 2.9pps increase from the 8.2% expansion from the same period last year. Consumer goods posted 23% growth amid sustained demand for food and beverages. Petroleum products grew by 61.5% upon recovery from volatile markets last year. Lastly, for capital goods, fabricated metal products rose 74% in volume as the government shifts to a robust infrastructure development program.

The Department of Finance (DoF) seeks to generate an additional P47bn in revenues once the higher excise tax on sugar sweetened drinks has been implemented. Sugar sweetened beverages will encompass non-alcoholic drinks with added sugar or artificial and non-caloric sweetener. The current proposal would be the P10 per liter tax, which could generate P47bn only for the first year of implementation. 85% of the collections will be allocated to government priority projects, while the remaining 15% will be for sugar farmers.