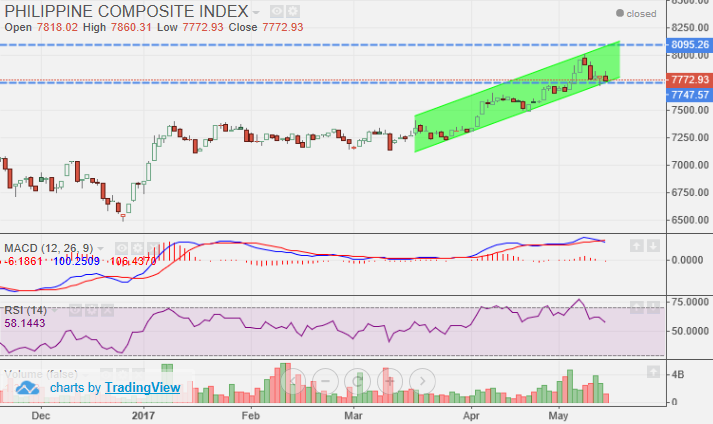 News Highlights: Metro Pacific (MPI) is in talks with Alberto Lina for the acquisition of its logistics firm, Air21 Express. The idea to buy Air21 is still under discussion. Alliance Global (AGI) logged 2% growth in Q1 net income to P5.4bn on higher earnings from property, beverage, and fast-food segments. DMCI Holdings (DMC) property segment is in talks with NTT of Japan to develop a 2-tower office and residential complex in Makati, which can bring around P8bn worth of new property inventory. Meanwhile, OFW remittances for the month of March rose 10.7% YoY to $2.615bn. It was also higher compared with prior month’s level of $2.169bn.

Most gained on oil rally: Most Asian markets ended positive, merely shrugging off concerns on North Korea's missile launch tests and global cybersecurity attack over the weekend. Optimism rooted mainly on the rally in oil as large oil producer and exporter, Saudi and Russia, both released a statement siding a 9-month extension on the output cut agreement.

Optimism on extension lifts prices: Oil prices rallied amid Saudi Arabia's and Russia's comments on extending its output cut agreement until 1Q18. The extension, however, has yet to be agreed upon by all parties at the OPEC meeting on 25 May. West Texas Intermediate (WTI) climbed $ to $/barrel.

Metro Pacific (MPI) is in talks with Alberto Lina for the acquisition of its logistics firm, Air21 Express. The idea to buy Air21 is still under discussion. Air21 was the former Philippine licensee of US based logistics provider, Federal Express, which is now engaged in door-to door courier delivery, cargo transportation, warehousing, crating, bulk shipments and mailing. Recall that MPI earlier said that it raised its budget for logistics to P8bn from P5bn.

DMC in talks with NTT:

DMCI Holdings (DMC) property segment is in talks with NTT of Japan to develop a 2-tower office and residential complex in Makati, which can bring around P8bn worth of new property inventory.
DMCI Homes would be making its debut in the office property business as part of a two-tower project planned along Pasong Tamo, Makati. Currently, the firm said that they are in talks with other foreign investors, but NTT is said to be in advanced stages already.

DoubleDragon Properties Corp. (DD) said that its net income for 1Q17 grew by 279% YoY, which implies a level of P165.5mn. Revenues more than doubled. DD has 15 operational CityMalls with an average occupancy rate of 95.2%.

Vista Land & Lifescapes, Inc. (VLL) reported P2.3bn in net profits during the first quarter of 2017, 11% higher YoY. Revenues were higher by 14% at P9bn from its residential and leasing operations. Capital expenditures for 2017 is pegged at P35.3bn, while the company is targeting 1mn GFA for 2017, where it currently sits at 951,533.

Wilcon Depot (WLCON) recorded Q1 net income at P390.5mn, with net sales reaching P4.182bn.
Sales grew 14.1% at P3.667bn when the retail operations was still under the parent company, Wilcon Corporation and prior to start of operations by WDI on April 2016. Sales from depot-format stores accounted for 96.7% or P4.045bn of total sales.

GMA Network, Inc. (GMA7) said that it’s open to revive talks for the sale of a majority stake in its network. GMA7 chief Felipe Gozon added that the owners were talking to the same interested potential investor. Majority shareholders of the broadcaster earlier agreed to sell about 30% of the company to Ramon Ang, but the negotiation bogged down after more than a year of talks.