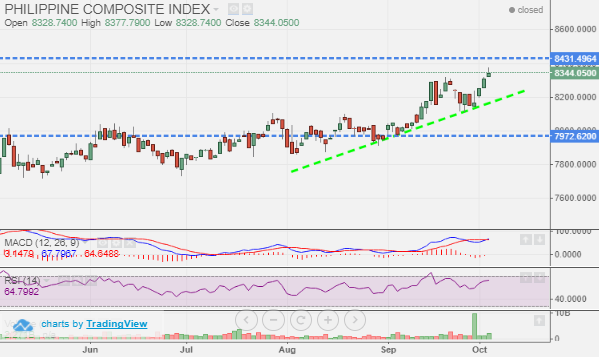 News Highlights: MPCALA Holdings, under Metro Pacific Investments (MPI) hopes to get original proponent status for the P22.43bn Cavite-Batangas Expressway (CTBex) this November, while Globe Telecom (GLO) sees 50% of its mobile data traffic to come from its long-term evolution (LTE) by end-2017. On the economic front, Finance Department (DoF) sees inflation at 3.4% in September, mainly attributed to higher prices of food, fuel and power.

Shares continue upward momentum: Shares continue to end higher albeit showing signs of winding down, as investors continue to weigh in on economic data, Fed succession battle and renewed turmoil in Washington that saw Rex Tillerson publicly confirm his intention to remain on as Secretary of State.

MPI's MPCALA tries to get original proponent status on CTBex:

Century Properties (CPG) started the construction of PHirst Park Homes in Tanza, Cavite. This project is a 26-ha. horizontal community with a total of 2,877 units. CPG also signed an agreement with Megawide (MWIDE) for the application of its precast concrete panel building systems for 2,830 housing units. As of August 017, reservation sales for the first phase has reached 91% valued at approximately P1.2bn.

Lepanto (LC) starts commercial operation of its Copper-Gold project. Under this project, the combined indicated and inferred resources amounted to 7.746 MT at 0.896 % Cu and 1.974 g/t Au. Also, on-going drilling has outlined an additional geologic resource of 7.29 MT at 1.69 % Cu and 2.02 g/t Au. LC has sold 1,048 dry metric tons copper-gold concentrate to be shipped this week.

Finance Department (DoF) sees inflation at 3.4% in September, mainly attributed to higher prices of food, fuel and power. This is higher compared to August’s 3.1%. Meanwhile, the central bank (BSP) earlier said that it sees September inflation to as high as 3.6% on the back of the same reasons including a weaker peso.

World Bank (WB) downgraded the country’s GDP to 6.6% this year from its previous estimate of 6.8% amid the slow pace of the infra push program. WB said that the delay in the anticipated push of the infrastructure program has been contributing to the moderation of fixed capital formation growth, softening the growth prospect for the year. WB, however, noted that the Philippines is expected to continue to be the fastest growing of the large Asean economies.