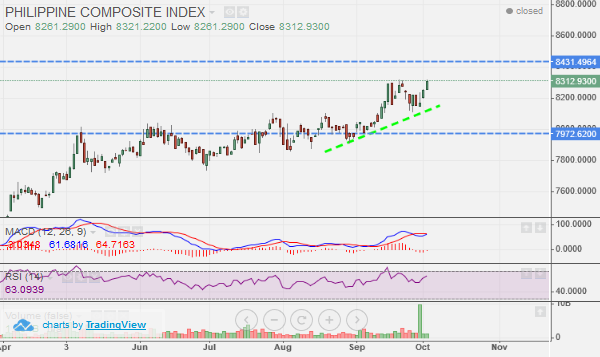 News Highlights:Philippines Renewable Energy Holdings Corp. successfully completed its voluntary tender offer to acquire up to 31.7% of Energy Development Corporation’s (EDC) for approximately $1.3bn.Meralco (MER) expressed their interest to join Philippine National Oil Co. (PNOC) in the development of a liquefied natural gas (LNG) terminal. On industry, Trade and Industry Secretary Ramon Lopez said the DTI is inclined to require pre-shipment and post-shipment testing of cement imports to ensure quality are up to standards and that no one would question if they are favoring any player in the industry.

MER in talks with PNOC for LNG dev't:

Meralco (MER) expressed their interest to join Philippine National Oil Co. (PNOC) in the development of a liquefied natural gas (LNG) terminal. Recall that the Energy Department (DoE) asked PNOC to develop the country's first integrated LNG terminal that may include a power plant with 200MW-800MW capacity. DoE wants the LNG facility to break ground next year and be completed by 2020 or 2021.

Philippines Air Asia opposes the Civil Aeronautics Board draft resolution to impose caps on domestic airfares as the imposition of a floor and ceiling rate on domestic fares may unnaturally skew average domestic fares to higher levels while fares for international flights will remain as is. The move may paint an unfavorable picture of the domestic aviation industry and affect domestic tourism.

SBS Philippines Corp. (SBS) unit, Cleon Phils. Holdings Corp. acquired a 5ha parcel of land along JP Rizal Street in Mandaluyong. The move is intended for investment purpose, a part of SBS strategy to invest in small ownership stake in companies investing in real properties to have a more diversified interest in different property holdings at a lower capital requirement and risk exposure to the company. SBS’ stake in Cleon Phils. is at 37.5%.

MRC Allied, Inc. (MRC) completed its acquisition of a 15% stake in a solar farm in Leyte for $5mn. MRC had signed and executed a deed of assignment with Amled International Systems, Inc., one of the owners of Sulu Electric Power and Light (Phils.), Inc. (Sepalco). Sepalco owns a 50MW solar project in Barangay Castilla in Palo, Leyte province, which started operations last March 2016.

TransCo to foray into telco:

National Transmission Corp. (TransCo) president eyes to amend the charter of TransCo by converting into a telecom company on top of being a transmission firm. The move would help achieve the company’s goal of nationwide broadband rollout, while securing the country’s ancillary reserve requirement. He added that TransCo could utilize its transmission assets, specifically the fiber optic network for the broadband rollout.

Based on data from Kantar Media, ABS’s audience share stood at 47% vs. GMA’s 33%. However, GMA Network maintains its lead in the urban areas, with audience share of 41.9% as against ABS-CBN’s 38.8% as per Nielsen TV Audience Measurement data.

The Department of Agriculture (DA) is building its largest P300mn biotechnology center to be housed by the Philippine Rice Research Institute (PhilRice) which will generate improved technologies for the local farm sector. The facility will cover the construction of new buildings, purchasing of state-of-the-art biotechnology equipment and laboratory furniture, and monitoring and evaluation of the project in coordination with the Philippine Council for Agriculture and Fisheries

The Philippine Retailers Association (PRA), warns that the move to liberalize retail trade in favor of foreign investors would harm local micro, small- and medium-sized enterprises (MSMEs), reversing “the gains of the past years” at a time when the government promised to put MSMEs at the forefront of development.

Trade and Industry Secretary Ramon Lopez said the DTI is inclined to require pre-shipment and post-shipment testing of cement imports to ensure quality are up to standards and that no one would question if they are favoring any player in the industry.