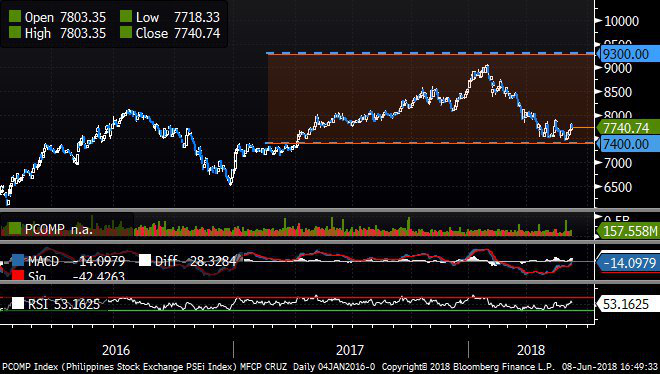 Tight trades. Sessions might start soft on a three-day trading week, although profittaking could prevail due to lack of other moving catalysts. Traders would watch the PSEi’s staying power above 7,700, or possible retracement to 7,600. Attention might be sector-specific, with second-tier shares that have good stories, bound to lead. Immediate support is 7,700, secondary at 7,680, resistance 7,750.

Ended in red. Asian bourses were a sea of red Friday led by Chinese marts, as trade tensions ratcheted up ahead of the G7 summit.

DoTr said Metro Pacific Investments Corp. (MPI) - Ayala Corp. (AC)’s unsolicited proposal for the rehab & takeover of MRT3 will be addressed by yearend. The consortium comprised also of Macquarie Infra Holdings, aims to invest P20bn for the project for 30-32 years.

Century Properties Group, Inc.(CPG) will issue a total of P0.0172/share cash dividend to holders as of exdate 21 June, payable on 06 July. This is equivalent to 3.8% dividend yield.

Global-Estate Resorts, Inc. (GERI) is looking at P8bn sales from the 36-storey condo project in Ortigas called The Fifth. Each unit will have balconies. Completion is slated in 2024.

BLOOM unit to buy shares for loyal patrons of Solaire:

Bloomberry Resorts Corp. (BLOOM)’s board approved Bloomberry Resorts & Hotels’ (BRHI) purchase of up to 1.5mn common shares of BLOOM at market price. The shares will be given as reward to Solaire’s loyal patrons & part of its marketing program.

East West Banking Corp. (EW) raised P2.45bn for the initial tranche of its P15bn LTNCD float.The notes will be due 2023 & listed on PDEx.

Bureau of Treasury (BTr) raised P122.77bn from its 3-year retail treasury bonds (RTBs) that will become part of the national budget. Coupon was set at 4.875%. Meanwhile, BTr plans to raise another $2bn from yen & $-based notes before yearend.

Int’l. credit rating agency Fitch Ratings will visit Manila on 13-15 June to review the Philippine’s credit profile. The meeting will be attended to by DoF, DPWH, DTI & BCDA, among others.

Lower FiT to be filed by TransCo:

TransCo is eyeing lower Feed-in-Tariff (FiT) allowance rate in 2019 before the end-July deadline, because of a lower P4.6bn deficit. TransCo already filed for an increase in 2018 FiT of P0.2932/kWh, which is pending ERC’s approval.

Gov’t. will select among 5 prospective bidders its fuel marking & field testing system contract that aims to curb smuggling. The price ceiling was pegged at P0.08/liter over a 5-year period. For 2018, 21.9bn liters are seen to enter the country’s ports & sub-ports & is seen to rise to 26.6bn liters by 2022.