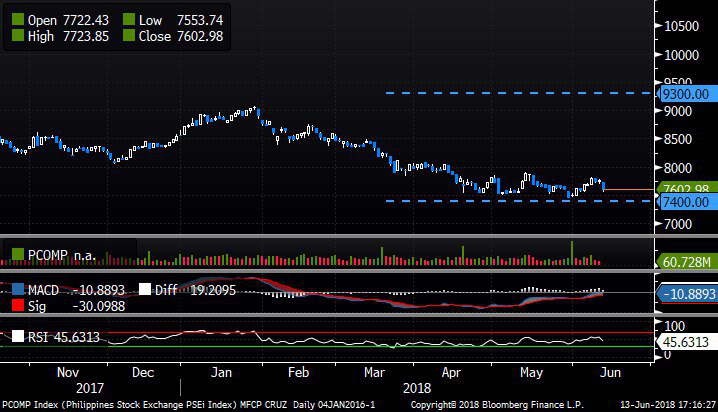 News Highlights: The Fed raised overnight lending 25 basis points (bps) to 2%, affirming its outlook on the strength of the US economy. It also hinted tolerating inflation above its 2% target through 2020, & raising rates at least by 2 more for 2018. On the local front, Bureau of the Treasury (BTr) made a partial award of P7.6bn for the 7-year T-bonds at 5.976% average rate, 11.1 basis points higher than the 5.865 percent recorded in the previous auction.

Cautious watch: Players might remain at bay for now, given yesterday’s sell-off, as they check on local equities’ response to the Fed rate hike. Skeptics are likely to test the PSEi’s staying power above 7,500 vs. the possibility to re-test 7,400. For now, attention will be on the peso’s trend, after moving above P53:$1. Speculative play is seen, as locals punt for intra-week range in select shares. Immediate support is 7,500, resistance 7,600.

Mostly beaten: Asian bourses were mostly lower Wednesday, as eyes were on key decisions from US’s FOMC and Eurozone’s ECB meetings that are expected to adopt stimulative policies that could fuel an economic rebound.

The High Court of Accra, Ghana dismissed the case filed by bidder, BXC Co. (Ghana) Ltd., on Millennium Dev’t. Authority (MiDA), after the latter declared Manila Electric Company (MER) as the preferred bidder for the $535mn power concession. No official statement has been released by MER yet on the matter.

NOW gets cleared for capital raising:

AgriNurture, Inc. (ANI)’s board approved during a special meeting last 13 June, the formation of a fully-owned unit with P100mn authorised capital that would consolidate & focus on post-harvest & farm technology. ANI also approved the issuance & listing of 23mn shares at P13.86 apiece in favor of Takuhiro Kusumi.

VMC sought for regulators’ consent on changes to rehab plan.

Bureau of the Treasury (BTr) made a partial award of P7.6bn for the 7-year T-bonds at 5.976% average rate, 11.1 basis points higher than the 5.865 percent recorded in the previous auction. Total tendered amount reached P14.4bn.