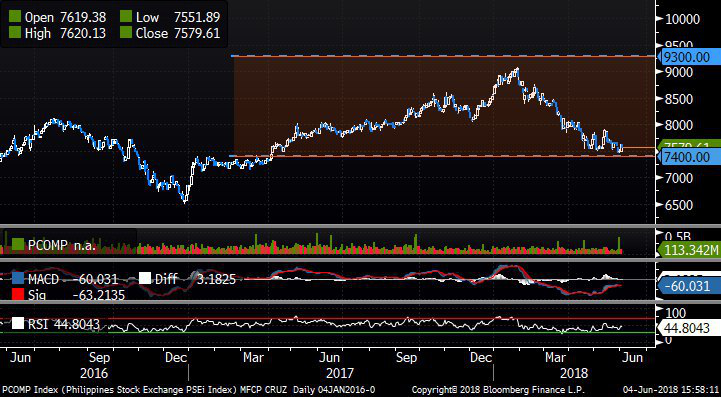 News Highlights: Tech shares aided Wall Street’s advance, as Apple started its annual developers’ conference & Microsoft’s $7.5bn deal to buy into private coding website, GitHub. On the local front, around 900ha. in Boracay will be covered by government’s agrarian reform plan while MWSS aims to release its decision on rate rebasing on water this August.

Mostly in the green: Most of Asian stocks scored a green on Monday following end-of-week gains in the U.S. on another solid jobs report, led by Hongkong, Taiwan and Japan.

No purchase accord in Southwest Maritime, CLC said:

Chelsea Logistics Holdings Corp. (CLC) clarified to the Exchange they have not signed any agreement with Southwest Maritime Corp. for any acquisition. Reports showed CLC might sign a deal with Southwest, following its recent purchase into Starlite Ferries.

AbaCore Capital Holdings, Inc. (ABA)’s fully-owned Abacore Capital Holdings sold various lots totalling 292,953sqm. to Lemery Realty Dev’t. Properties at P2k/sqm., or P586mn. 20% of the amount will be settled upon signing of Contract to Sell, the balance in 2 years.

IRC Properties, Inc. (IRC) submitted an unsolicited proposal to Makati City gov’t. for the Mass Transportation System project. Also, IRC authorised its president, Antonio Tiu, to enter into a consultancy agreement with Mr. Hao Fuyin as int’l. finance consultant of IRC. The board also approved reactivation of Interport Dev’t. Corp. & declaration of 5% of retained earnings as property dividend, in the form of IRC shares. All other terms & details were not provided.

Around 900ha. in Boracay will be covered by government’s agrarian reform plan. Of this, 25ha. are immediately coverable by CARP & can be distributed to 80 Aeta beneficiaries within 3 months or less. These are Bgy. Yapak, Manoc-Manoc & Balaban. Phase 2 will cover 220ha., 3 at 600ha.

MWSS aims to release its decision on rate rebasing on water this August. The move has been delayed for 5 months already following the change in MWSS administration. Maynilad plans to spend P132bn in the next 19 years for sewage treatment alone, while MWC will invest P37bn for 725MLD for 2018 up to 2022 & P116bn onwards for 222MLD.

Treasury (BTr) will issue $1bn Samurai bonds 3Q18 under several tenor buckets. Apart from regulatory approvals, the timing will depend on market conditions.

BSP will start its Net Stable Funding Ratio (NSFR) starting 01 July, ahead of the 2019 target for its full adoption. This requires banks to hold reliable sources of funding to match needs for one year.

Revolution Precrafted Properties Phils. aims to set up its own factory in each region to support its expansion plan. The first will be set up in Asia within the year.