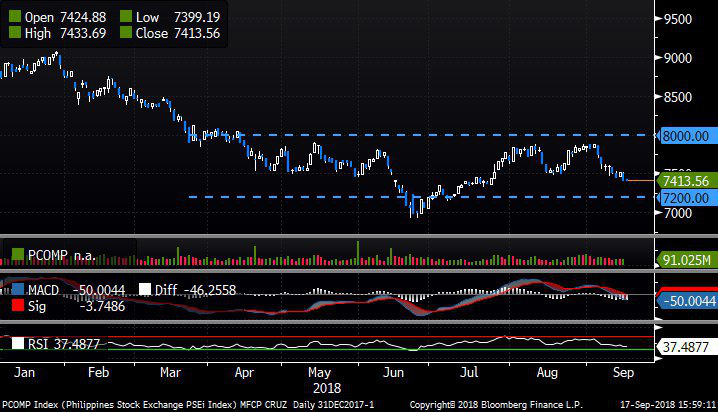 Heedful watch: Another subdued yet volatile session is seen, as fund managers heed for the market’s response to BSP’s hint for 'stronger monetary action' ahead of its policy meeting next week. Such may be taken into light on the peso’s movement against the greenback. The spotlight might be on financials, given its recent slide. Overall volume turnout might also be at work, given yesterday’s pale trend. Spot for good trading windows. Immediate support is 7,380-7,400, resistance 7,450.

Marts rebounded: Most Asian markets dropped on Monday as fears heightened on the escalating trade war after reports that U.S. President Donald Trump would unveil new tariffs on $200 billion of imported Chinese goods this week, putting the possibility of a renewed trade talks with China hang in balance.

Crude slightly weakened: Speculation that major oil producers will discuss production increases in the coming weeks plus further eroding trade relation between US & China caused some selling in crude Monday, though movement was limited due to concerns with Iranian sanctions. West Texas Intermediate (WTI) dipped $0.09 to $68.71/barrel.

SEC allowed Energy Development Corp. (EDC) to extend its tender offer by 20 more business days from 22 Oct. 2018, if necessary or desirable. In recap, EDC offered P7.25/share for 2bn common shares he’d by the public in preparation for its delisting plan.

Metropolitan Bank & Trust Company (MBT) is selling long-term negotiable cert. of time deposits (LTNCTDs) at 5.375% per annum, carrying a tenor of 5 years & 6 months. Offer run is 17-28 Sept., & will be sold in denominations of P50k with increments of P10k thereafter.

AgriNurture, Inc. (ANI) entered a MoA with state-owned Vietnam Southern Food Corp. (Vinafood II), for the export of rice. Based on the MoA, Vinafood agrees to exclusively supply ANI up to 2mn MT of long grain rice per year for importation to the Phils. Terms & condition will be finalised based on the proposed rice tariffication bill, among others.

BSP chief Espenilla hinted of ‘strong monetary action’ ahead of its meeting on the 27th of Sept. The BSP head also cited supply factors, specifically from damages of the typhoon. Meanwhile, BSP is also studying a tool to curb speculative activity at the forex mart, esp. for non-deliverable forward contracts.