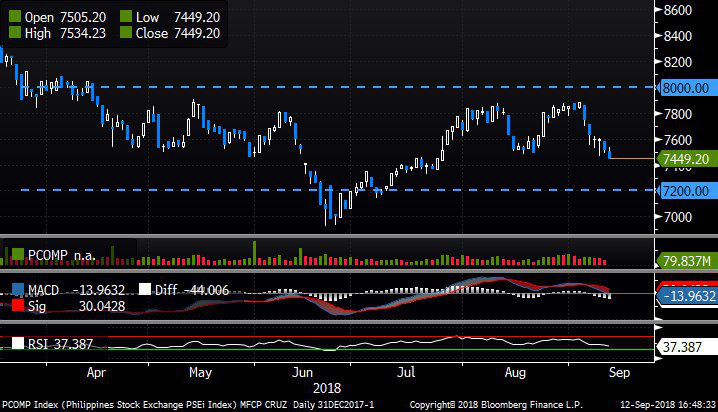 Retest of 7,400 level, but with downward bias: Having broken past 7,500, some selling might resume today as the peso breached its 13-year low of P54.13:US$1 yesterday. There being no other new leads, attention will shift towards the BSPs policy meeting soon and its actions to arrest the peso's slide. On the flipside, participants may acknowledge Pres. Duterte's EO to manage inflation. Check on value plays with already bargain valuations. Continue to trade within range. Immediate support 7,400, secondary support 7,375, resistance 7,500.

RLC’s Dusit Thani hotel in Cebu to be finished soon:

Robinsons Land Corp. (RLC) intends to complete its 300-room resort hotel in Mactan, Cebu in 2019 under Dusit Thani brand. The hotel will be at the center of its 10ha. AmiSa mixed-use project. Once finished, the hotel would add to RLC’s 211-room Summit Circle & 200-room Summit Galleria Cebu.

Century Properties Group, Inc. (CPG)’s Century City Dev’t. (CCDCII), signed an accord with Leechiu Property Consultants for the P4.5bn office building in Makati. CPG’s board recently approved the change of name of The Forbes Media Tower. to Century Diamond Tower. Leechiu will be the exclusive agent to market 58,618sqm. leasable space for the 35-storey premium office building. Century Diamond is owned by CPG subsidiary, Century City Dev’t., & Mitsubishi Corp., & will be completed in 2019.

Century Properties Group, Inc. (CPG) aims to raise its completed gross floor area of 133k sqm. to 300k sqm. by 2020 once leasing projects are completed. The firm will also open an office tower in BGC via JV with Asian Carmakers Sept. 2018. Leasing revenues will potentially increase over 5x, from P342mn in 2017, to P1.5bn in 2020.

Socioeconomic Planning chief Pernia said Pres. Duterte will be issuing an Exec. Order (EO) covering 9 measures to contain inflation. This includes among others, tighter watch on rice imports of NFA; enabling the Agri bureau to allow importation of fish; set-up of public markets where producers can sell directly to the end-user for chicken; importation of sugar.

BSP issued circular 2018-026, requiring all banks to have electronic banking & interbank transfers in place by 30 Nov. These services must be mounted on InstaPay & PESONet clearing houses with BSP.

DICT is on track with its timeline to naming the major players by Nov. for the 3rd telco slot. Bidding may be mid-Nov. & bidders will be given 45 days. The local firms that expressed interest are PTT, NOW, Converge ICT, TBGI, ECP & TierOne.