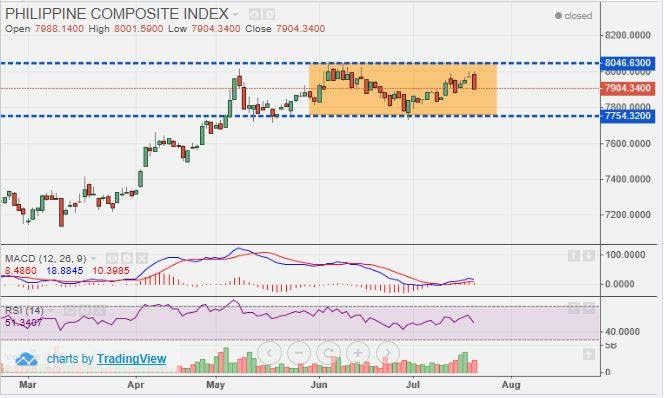 News Highlights: San Miguel (SMC) gets go signal from SEC for the incorporation of SMC Asia Car Distributors on 20 July. Meanwhile, Chelsea Logistics priced its public offering at P10.68/share, enabling the firm to raise up to P5.84bn.

Might rebound: We might see our local bourse trading with modest gains as investors anticipate the results of 2Q earnings. The news on the regarding the P900mn internal fraud on Metrobank (MBT) could sway the financial sector as the integrity of the banks’ internal controls are put to challenge once more. Immediate support 7,850, resistance 8,000

Marts mixed on BOJ decision: Bourses in the region closed mixed after the Bank of Japan (BOJ) decided to keep policy rates steady. Also, the central bank lowered its inflation outlook for fiscal years 2017/2018 and 2018/2019.

Crude down despite lower US inventories: Oil prices closed lower amid renewed worries about the global glut in crude. US Energy Information Administration (EIA) reported that US crude inventories declined by 4.7mn barrels as of week ending 14 July. West Texas Intermediate (WTI) declined $0.33 to settle at $46.79/barrel.

SMC incorporation of unit gets green light from SEC:

San Miguel (SMC) gets go signal from SEC for the incorporation of SMC Asia Car Distributors on 20 July. SMC Asia Car is 65% owned by SMC, with the remaining 35% owned by Palawan Governor Jose Ch. Alvarez, who currently chairs Asian Carmakers Corp. (ACC) -- the exclusive importer and distributor of BMW vehicles in the Philippines. Meanwhile, SMC assures completion of the MRT-7 by last quarter of 2019 if there are no right-of-way issues from government that typically delay big-ticket infrastructure projects.

Chelsea Logistics priced its public offering at P10.68/share,enabling the firm to raise up to P5.84bn. The firm got a recent approval to market debut, with offer period starting 24 July until 31 July. Listing would be on 8 August under 'CLC' stock code.

PLDT Inc. (TEL) has been ordered by the Department of Labor and Employment (DOLE) to regularize
its 8,720 contractual employees. The agency also ordered to pay P77.5mn in overtime, holiday and 13th month incentives to its 2,500 employees.

Metropolitan Bank and Trust Co. (MBT), the 2nd largest bank in the country, lost P900mn on internal fraud after a bank vice president funneled disbursed loans into fictitious accounts created under the name of Universal Robina Corp. Investigations are on-going and the loss could reach as much as P2.5bn.

FOOD firms up deal with Kawasho:

Alliance Select Foods (FOOD) firmed up its partnership with Japanese firm Kawasho Foods for the latter's investment in a new product line facility FOOD's plant premises in General Santos City. This facility will allow the distribution of its seafood products in pouches. Kawasho is a consumer goods company with distribution channels in Japan.

Shakey's Pizza Asia Ventures (PIZZA) is ramping up its efforts to grow its earnings and sales by mid-teens by end- 2017 as it further expand into the Visayas and Mindanao region. PIZZA is allocating around P400mn to P500mn for the construction of 20 stores in the country, adding to its 189 stores as of end March.

Basic Energy (BSC) signed the investment term sheet and has remitted a refundable earnest deposit to Solmax Power Limited of Hongkong in the amount of JPY 50mn to trigger the due diligence work to be conducted by BSC on the company and its solar projects In Japan.

PhilWeb Corp. (WEB) has acquired the electronic gaming site of PAGCOR in Lapu-Lapu City, Cebu. The subsidiary of WEB, Big Game Inc., has acquired the facility from Amparo Umali by selling 835,400 shares priced at P10.50 per share.

Solar Philippines Power Project Holdings, Inc. would be expanding overseas with contracts to deliver solar panels to Taiwanese and Chinese firms. Its president Leando Leviste said that around half of its deliverables for 2018 are slated overseas, in which they may be more progressive about solar power.

Asian Dev't. Bank (ADB) upgrades its Philippine growth forecast amid improving prospects in Asia and the administration's infrastructure push. Growth forecasts are upgraded from 6.4% to 6.5% for 2017 and from 6.6% to 6.7% for 2018.

The Bangko Sentral ng Pilipinas approve the appointment of Chuchi Fonacier as deputy governor for Supervision and Examination Sector, to fill in Nestor Espenilla Jr.’s vacancy.

Economic Planning chief Ernesto Pernia raised the idea of raising the limit of foreign ownership on the telco industry to 70% to attract more foreign direct investments. This was amidst government concerns over the telco services. He added that such a change would require Congress passing a new law.

Finance Dep’t. would be receiving an initial payment of P3.5bn from Mighty Corporation, as part of its tax liabilities to the government. The amount would actually come from Japan Tobacco International, which agreed to buy Mighty Corp. and its assets for P45bn. Its payment, however, would not preclude the company from any criminal charges that the Bureau of Internal Revenue(BIR) might file against it in connection with its tax-related cases.

41 foreigners from China and 2 from Malaysia believed to be loan-shark giants kidnapped a Singaporean woman near the Solaire casino, demanding $180,000 in ransom. The woman was rescued the next day, but analysts fear this would compound more fear on safety in casinos.