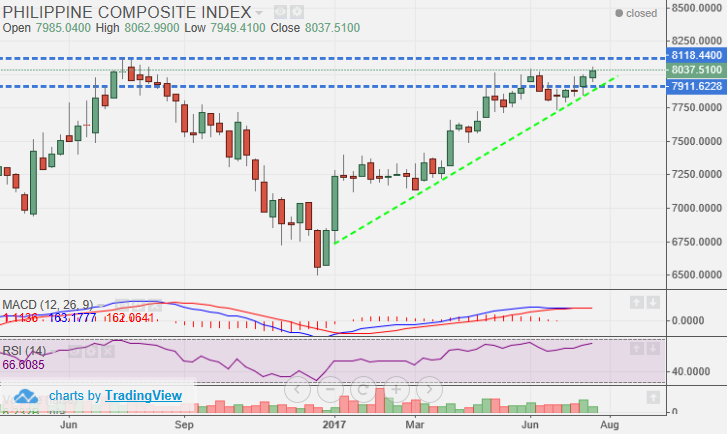 News Highlights: The Philippine Competition Commission (PCC) has given its go-signal to the joint venture of Federal Land and Isetan Mitsukoshi Holdings and Nomura Real Estate Development Co. Ltd. Meanwhile, International debt watcher, Fitch Ratings, expects that the Philippines will grow by an average of 6.6%, well above the 2.9% median growth for the countries that has "BBB" rating.

Mart breaches psychological barrier, PSEi @ 8,034: Shares rallied to the 8,000 mark on the back of optimism for the tax reform package. All sectors ended in green except Industrial, with Mining/oil and Property sectors on the lead. Among actively traded shares were MBT (+P0.25 at P85.60), MEG (+P0.26 at P4.98) and ALI (+P0.75 at P43.95), on 7.52bn turnover. Gainers narrowly outpaced losers 98-94, with net foreign buying at P6.7bn.
Might trade higher on optimism: Having broken the 8,000 psychological barrier, Mart might trade higher on optimism with the implementation of the tax reform package, expected to begin 3Q17. Investors might also react positively to the appreciation of the peso and the Fed's announcement of keeping interest rates steady/unchanged. Immediate support 7,950, resistance 8,150.

Shares rallied on Fed update: US equities benchmarks ended higher on the back of good corporate earnings and the Fed's update on keeping interest rate unchanged at 1% - 1.25% and the balance sheet reduction signal that will likely happen on September.

The Philippine Competition Commission (PCC) has given its go-signal to the joint venture of Federal Land and Isetan Mitsukoshi Holdings and Nomura Real Estate Development Co. Ltd. PCC said that the joint venture by Federal Land and the joint venture of Isetan and Nomura is not likely to result in a substantial lessening of competition in the relevant market, considering that the parties are not operating in the same relevant market. The JV involves the development of the P20bn Sunshine Fort project which will comprise four high-rise residential towers atop a commercial complex in Bonifacio Global City, Taguig. This will house a department store to be led by Isetan Mitsukoshi while Nomura shall design the four residential towers.

RFM Corp. (RFM) is looking to acquire businesses in the pasta, sauce and milk category as it aims to grow its business. The company expects to earn not below P1bn this year and is allocating roughly P400mn for its capital expenditures for 2017.

8990 Holdings (HOUSE) is spending P452m for the construction of its first mall, Deca Mall Tondo,
which will be constructed within its 8.4ha Urban Deca Homes Tondo complex in Manila. HOUSE is still on the process of looking for tenants, particularly supermarket and a department store. The mall is set to be completed in 1 year.

PetroEnergy Resources Corporation eyes a 33% growth in net income this year amid marked improvement in revenues and income in the 1H. The main driver for this year is the realization of full year operations for its 50MW Tarlac Solar project. As long as efficiency in its plants are maintained, PERC could post $7.7mn in profits.

Holcim Philippines, Inc. (HLCM) would be allotting $54mn over the next 2 years to increase its current capacity in support of the government's infra push. HLCM plans to add 2mn metric tons (MT) by 1H19, bringing its total capacity to 12mn MT.

Fitch pegs 6.6% GDP growth for the next five years:

International debt watcher, Fitch Ratings, expects that the Philippines will grow by an average of 6.6%, well above the 2.9% median growth for the countries that has "BBB" rating. Fitch sees a 6.8% growth for the country this 2017, which falls within the 6.5-7.5% target of the government. However, Fitch flagged the relatively weak governance, citing the need to increase revenues.

2018 budget to be approved by late August:

House committee in appropriations expects the committee-level approval for the government's P3.767tn budget in 2018 by 22 August. This would be after it starts fresh deliberations by 1 August. The proposed budget represents a 12% increase on the current year's General Appropriations Act (GAA).