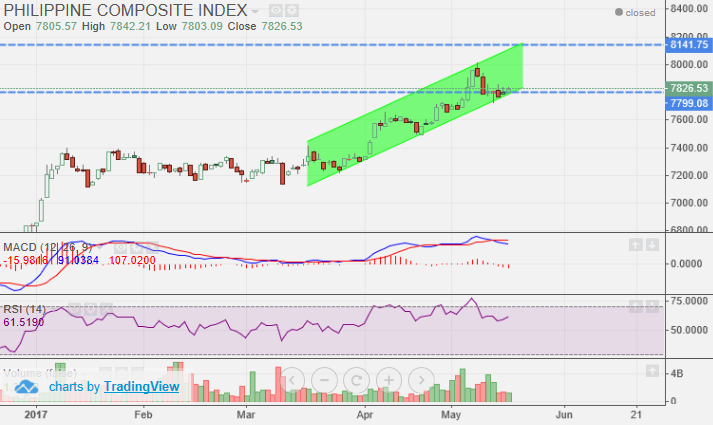 Mart climbed anew ahead of 1Q GDP release, PSEi @7,826: Local mart sustained its rally as investors continue to position their trades a day before the release of 1Q GDP results. PSEi added 35 points to close at 7,826 (+0.46% day-on-day), with sectors ending mixed. Among actively-traded shares were: URC (+P0.80 at P159.20); ALI (-P0.30 at P38.60); and MBT (+P1.00 at P89.00), on P8.01bn turnover. Losers edged gainers, 98-92, as net foreign inflows reached P510.5mn.
Might track US losses: Our local bourse might trade lower, mirroring the decline in Wall Street. However, the Philippine Statistics Authority (PSA) is set to release the results of GDP for the first quarter of 2017. Estimates are pointing towards a 6.8% growth during the first quarter, slightly higher from the 6.6% mark during the fourth quarter of the previous year. Immediate support 7,780, resistance 7,880.

Crude up on declining US inventories: Oil prices rose on US Energy Information Administration (EIA) data that showed a decline in US crude inventories by 1.8mn barrels, way below the 2.4mn barrels forecast. West Texas Intermediate for June increased by $0.41 to close at $49.07/barrel.

JG Summit (JGS) pegged P48.2bn as its capital expenditures for the year to be able to fund its core business segments’ expansion programs. A report showed that JGS core businesses would be raising their own funds for this year’s capex. Universal Robina (URC) and Robinsons Land (RLC) budgeted P7.2bn and P16bn for their planned expansions, while the remaining capex would be used for fleet expansion of Cebu Air (CEB), operating & maintenance of its petrochemicals group and expansion projects of Robinsons Bank.

Aboitiz Equity Ventures (AEV) plans to spend $250mn-$300mn over the next 3-5 years to expand its cement production. The planned investment would increase the group’s capacity by 1mn metric tons from the current 7mn MT across 6 cement plants. The expansion involves ‘debottlenecking’ existing cement plants and construction of a new kiln.

Pilipinas Shell Petroleum (SHLPH) allots P12bn in capex in the next 3 years for its refinery upgrade, bitumen facility and retail network expansion. SHLPH plans to put up 1,200 retail stations around the country by 2020 while instituting refinery improvements to allow for longer refinery turnaround and increased efficiencies.

Integrated Micro-Electronics (IMI) completed the 80% acquisition in STI Enterprises Ltd. as part of its diversification strategy. The acquisition is expected to strengthen IMI’s industrial and automotive manufacturing competencies, broaden its customer base, enable it to have access to the UK and facilitate its entry in the aerospace and defense sectors.

The Department of Finance (DoF) vowed to practice "fiscal prudence" and reponsibility in investing and borrowing by making sure first that investments would provide more revenue and drive growth. DoF said that the government's thrust for accelerating infrastructure spending would bridge the country's infrastructure gap and create more jobs.