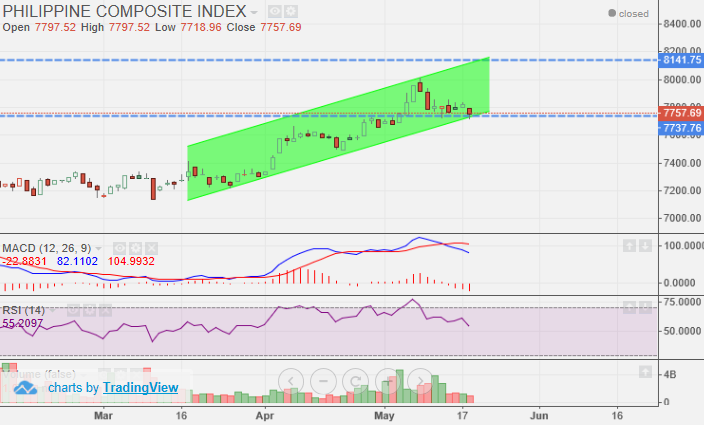 News Highlights: Pilipinas Shell (SHLPH) confirmed its discussions with Phil. National Oil Co. (PNOC) for a possible partnership to build a liquefied natural gas (LNG) facility in Batangas. Meanwhile, 1Q GDP slowed to 6.4% with Socioeconomic Planning chief Ernesto Pernia pointing out the growth from last year was high amid election spending, in which the impact has already dissipated.

Marts declined anew on political noise: Marts across Asia ended lower as investors are concerned on the current political uncertainties over the White House, where US Pres. Trump defended his actions on sharing classified information with Russia and the recent uncovering of former FBI Director James Comey memo.

Equities rebound on optimism: Shares finished higher coming from the worst sell-off of 2017. Investors seem optimistic that Pres. Trump can move forward toward his fiscal agenda. On the economic front, weekly jobless claims reached 232,000, below the 240,000 estimates.

Crude settled higher on output cut pledges: Oil futures inched higher as investors await the OPEC meeting in Vienna on the 25th of May. Currently, Russia has pledged to extend output cut as far as March 2018. West Texas Intermediate for June increased by $0.28 to close at $49.35/barrel.

Chelsea Logistics Corporation, a Dennis Uy-owned firm, secured a $220mn bridge loan from Bank of China Ltd. as part of the initial $3bn financial package the bank committed during Pres. Duterte’s visit to China in October. The proceeds would then be used for the acquisition of a 32% stake interest in 2Go Group through an affiliate. Note that Chelsea Logistics plans an initial public offering (IPO) next month.

1Q GDP slowed to 6.4% with Socioeconomic Planning chief Ernesto Pernia pointing out the growth from last year was high amid election spending, in which the impact has already dissipated. Moreover, he added that the changes in government and reorientation of programs would need time to settle as government spending slowed to 0.2% YoY. The figure was below the 6.8% growth a year ago and the 6.6% a quarter ago. It was also the slowest growth since the 6.3% posted in 4Q15.

BSP data showed that the country had a net inflow of $51mn in foreign portfolio investments in April, a reversal from the $460mn net outflows recorded in March and $354mn outflows from a year ago. However, the first four months of the year resulted in net outflows of $516mn on a year-to-date basis, vis-à-vis the $56mn net inflows for the same period in 2016.

The Philippine Amusement and Gaming Corp. (PAGCOR) expects to generate around P6Bn from online gambling taxes. PAGCOR has so far issued 42 offshore gaming licenses with 44 more applications pending its approval. Under Philippine Offshore Gaming Operators (POGO) regulations, applicants are required to pay $50,000 for online casino operations and $40,000 for sports betting operations. Once the license is granted, the operator will need to pay an additional $200,000 for e-casino license and $150,000 for a sports betting license.