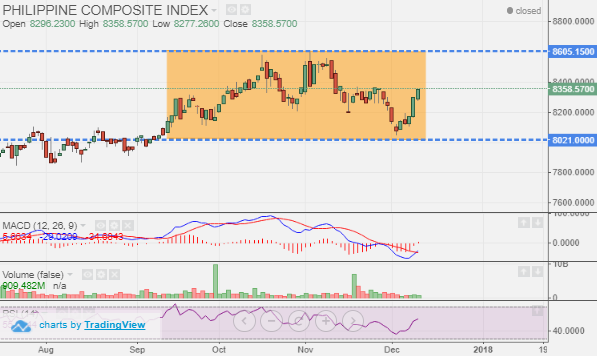 Might  trade  sideways  with  upward  bias:  A push-­and‐pull  might again follow after the run-­up  above  the  8,300  mark,  though  there  might  be  an  upward  bias  as  investors continue  to  look  for  bargains  on  aggressive  stocks  unloading  their  remaining  capex programmed for the year. Immediate support 8,250, resistance 8,440.

Chinese  shares  rise:  Asian bourses  were broadly higher on Monday  trade with Chinese stocks on the lead as shares were supported  by yet another record close on Wall Street and the absence of any geopolitical flareups.

Shares higher: US shares finished higher led by tech-­‐ & energy firms ahead of the Fed’s decision on interest rates later this week.

MWIDE’s co‐founder bows out to focus on other business:

Megawide Construction Corporation (MWIDE) co­‐founder Michael Cosiquien is bowing out of MWIDE to focus on their family-­owned cold storage business through a 2-­year transition period. Edgar Saavedra’s block widened to 41% last year after getting 14.67% for P5.68bn, while Cosiquien’s stake was lowered to 25%. No official statement has been given by the parties on the matter.

DNA to purchase 67% of Sydenham Lab:

Fitch upgraded the Philippine’s  credit rating to ‘BBB’ from ‘BBB‐‘ with stable outlook.    Fitch was positive on the administration’s infra plan, with GDP seen rising 6.8% for 2018 & 2019.

PNOC might bid out $2bn LNG terminal in Batangas:

The Philippine National Oil Company (PNOC) may bid out the $2bn LNG terminal in Batangas  in case no qualified  proposals  are received  by 31 Dec.   PNOC is also holding talks with Asian Development Bank (ADB) for consultancy undertaking.    The plan is to set up an integrated hub with storage, liquefaction, regassification & distribution facility with initial capacity of 200MW.

The  Info  & Communications Technology  bureau (DICT) wants the 3rd telco player to start operating mid-­‐2018,  after China Telecom was selected by China’s gov’t. as their telco arm in the Phils.

Gov’t to review extension of 10-­year license on Malampaya:

Gov’t. will review  whether  or  not  to  extend  the  10‐year  license  of  SPEX  &  joint venture partners Chevron Malampaya LLV & PNOC‐EC after the field’s contract  lapse  in  2024.    There  is  inclination  to  tap  PNOC-­‐EC  as  main operator & will just seek out farm­‐in deal from qualified parties for technical expertise. That would make PNOC-­‐EC get 100% of royalties from the present 10%.