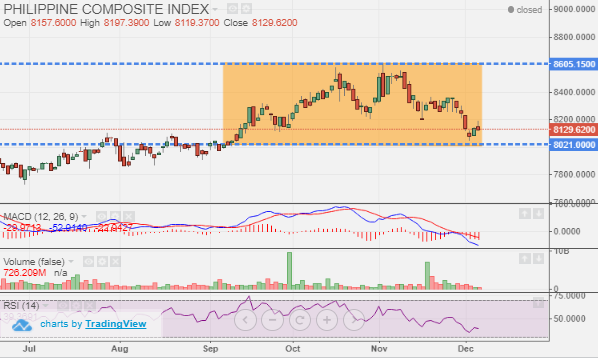 Aboitiz Power Corporation (AP) will add 500MW attributable capacity 1H18 with the completion of hydro & baseload plants. AP aims to make a final decision within 2017 on its next step for the extended shutdown of the Aseagas biomass plant, & write-off is a possibility.

Cebu Landmasters, Inc. (CLI) signed its 3rd serviced residence mgmt. agreement with The Ascott Ltd. for the 153-room ‘lyf Cebu City’ groomed for local & foreign millennial market. This will bring CLI’s hotel room portfolio to 600 rooms in 4 years. It will have ‘Connect’ communal spaces such as the ‘Bond’ social kitchen where guests can prepare meals, take cooking classes & socialise.

Vulcan Industrial & Mining Corporation (VUL) explained that the delayed backdoor listing of National Bookstore was due to the latter’s implementation of its Enterprise Resource Planning (ERP) system via SAP. VUL said National Bookstore will explore capital market options ‘at a more appropriate time’.

The discrepancy in trade figures between China and the Philippines has been declining in recent years but remains substantial, the Department of Finance (DOF) said, as estimated discrepancy between registered Chinese exports vs. Philippine imports has narrowed to 48% from same period last year’s 48.6%.

Government spending on infrastructure projects rose 17.8% to P51.5bn in October this year, as per data from the Department of Budget and Management (DBM). The DBM attributed the increase to the completion of public work projects such as road repair, upgrading and widening; flood control; and rehabilitation of dike systems, and the acquisition of transport equipment of the Department of Interior and Local Government (DILG) under its Capability Enhancement Program.

Sen. Sherwin Gatchalian is pushing for Senate Bill 1623 or the Recoverable System Loss Act, a law that aims to reduce the amount of system loss charges electricity companies are allowed to pass on to consumers in their monthly bills from 8.5% to 5% for private distribution utilities and 13% to 10% for electric cooperatives (ECs). This would give net overall savings as high as P0.66/kwH.