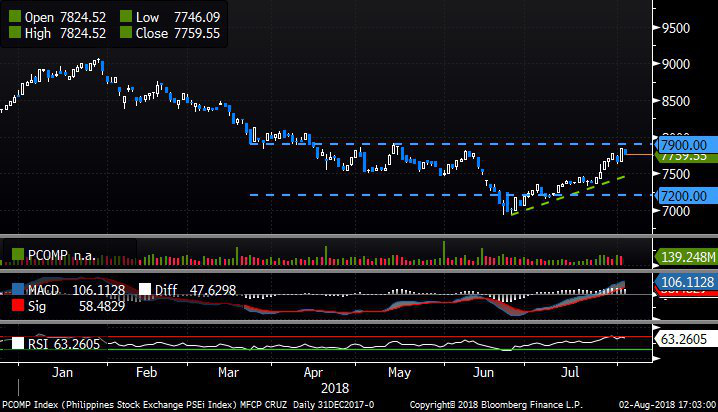 News Highlights: Apple’s climb (+3%) after its capitalisation reached the trillion dollar threshold led tech sector higher. On the local front, members of the House of Rep. Ways & Means approved in principle, package 2 of the tax reform (TRAIN) that provides for one percentage point cut in the current 30% corp. tax each year starting 2019, provided this won’t go below 20%.

Metro Pacific Investments Corp. (MPI)’s Metropac Movers (MMI) acquired over 200k sqm. lot in Cavite that will be developed to 141k sqm. covered warehouse space. MMI also plans to buy another 300k sqm. lot in Bulacan to build its logistics services. Volume handled in 1H18 stood at 31.6mn cases (+12%). Meanwhile, MMI completed its purchase of 12% in Air21 which may be raised to 100% in the future.

Metro Pacific Investments Corp. (MPI)’s MPTC sees spending P122.7bn in the next 5 years to build tollroads. The amount would rise by P25bn more, if MPTC were to secure the Cavite-Tagaytay-Batangas Expressway for which it was recently awarded Original Proponent status. The investment however, assumes satisfactory resolution of various overdue tariff adjustments, ranging 20%-48% on various parts of the network, without which, further investment will be delayed.

Package 2 of TRAIN cleared in principle:

Members of the House of Rep. Ways & Means approved in principle, package 2 of the tax reform (TRAIN) covering corporate taxes. The bill provides for one percentage point cut in the current 30% corp. tax each year starting 2019, provided this won’t go below 20%. The committee will have a technical working group to create a substitute bill.

Mining firms hopeful on results of talks with DENR head:

PX chief Eulalio Austin said the meeting with DENR Sec. Cimatu was a good venue to educate the Sec. on right & principled mining. He added that there is hope for open pit & the MICC results would need to be discussed with concerned parties first.

Royalty on mining proposed under TRAIN 2+:

Unnamed sources claimed the Palace might name Davao-based Alexis Lumbatan & RE advocate Catherine P. Maceda will replace 2 ERC Commissioners who retired recently. Devanadera stressed the new people cannot start from a learning curve that takes off from an elementary phase & priority must be set on old pending cases. No official statement was released by the Palace on the matter.