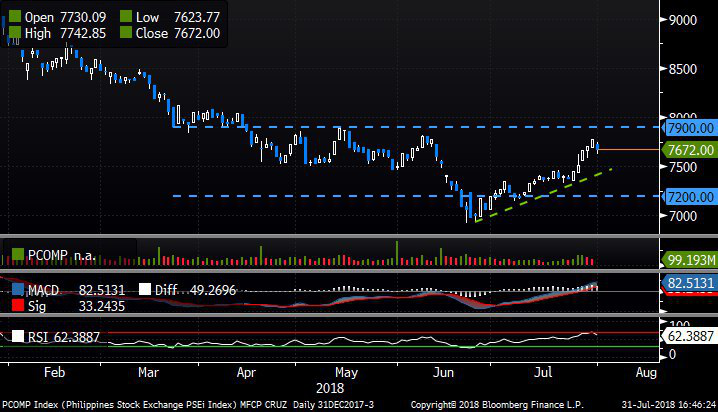 Zeal resumption: Local equities may resume a modest climb, taking its cue from Wall Street’s strength from expectations the Fed would retain their benchmark rate, & catalysts to expedite approval of the tax reform plan at home. Key sector news may also provide the boost, specifically for telco, mining & energy. For now, local gauges might build a firmer base within the current zone, to support sturdier rises. Most might keep a close tab on turnover improvement, plus continuity of net foreign buying. Immediate support is 7,630, resistance 7,750.

Metro Pacific Investments Corp. (MPI) chair Manny Pangilinan, is studying its participation in building LNG import terminal using Manila Electric Company (MER) & MPI. He underscored the importance of evaluating capacity based on 15- 16,000MW power demand. Next is cost of production since an efficient fuel source should be acceptable to consumers.

Metro Pacific Investments Corp. (MPI)’s majority-owned Dr. Jesus C. Delgado Memorial Hospital aims to raise the number of beds to 100 by 2022. The firm is talking to buy lots beside the hospital & coming up with satellite clinics.

Cebu Air, Inc. (CEB) chief Lance Gokongwei said the delivery of 10 planes in 2019 will be primarily used for int’l. flights, specifically in Chengdu & Xi An, China. CEB has maintained its target of 22mn passengers for 2018.

Philippine Bank of Communications (PBC) got approval from BSP to issue P5bn long-term negotiable cert. of time deposits (LTNCDs) in one or more tranches with max. tenor of 5 years & 1 day, to 7 years. No further details were given.

Philippine Telegraph and Telephone Corp. (PTT) requested Makati City’s RTC a petition to exit from rehabilitation based on terms of its approved rehab plan. Part of this covers holding a shareholders’ meeting to raise PTT’s authorised capital to cover its debt-equity conversion. No other data was given.

DoF sees P181.4bn in revenues for 2019 from the tax reform (TRAIN) package 1B. Total fiscal revenue is seen at P3.2tn (+13%). 1B covers tax amnesty & adjustments in excise taxes on vehicles, among others.

DICT chief Rio said the 3rd telco player will be announced first week of December. He also said settlement is seen to be made on 3G frequencies.

DENR Sec. Cimatu lifted its 2-year moratorium in approving mining exploration permits although the ban on new mining operation is still in place. DENR USec. The said only those with existing MPSAs can proceed with exploration. The panel also said 23 out of 27 mines passed an initial review for compliance with regulations.