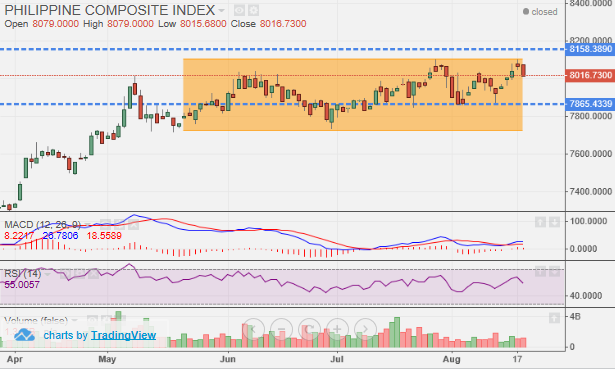 News Highlights: Metro Pacific Investments Corp. (MPI) is willing to sell its 10% stake in Maynilad worth P12bn to a Bangkok-based water company. PLDT Inc. (TEL) remained the market leader when it comes to broadband services after posting double digit growth in revenues and subscriber count. Meanwhile, the central bank (BSP) approved the registration of 2 companies to operate bitcoin exchanges as part of its efforts to regulate the virtual currency industry.

Took profits, PSEi @8,016: Local shares bagged in profits on Friday after investors priced in GDP results. PSEi settled 56 points lower to 8,016 (-0.69% day-on-day), with all sectors down, except for industrial (+0.06%). Among actively-traded shares were: MBT (+P0.70 at P87.80); URC (+P1.50 at P150); and SECB (-P5 at P256). Losers outpaced winners, 107-74, on P5.4bn turnover. Net foreign inflows slowed to P64mn.
Muted trading: Thin trading is expected with the start of ghost month. Lack of leads would likely place markets on a sideways note, trading a range for buying and selling opportunities. Local bourse might also side cautiousness amid ongoing US political concerns. Immediate support is 7,950, resistance at 8,050.

Metro Pacific Investments Corp. (MPI) is willing to sell its 10% stake in Maynilad worth P12bn to a Bangkok-based water company. Proceeds from the said transaction will be used to finance major projects and initiatives.

PLDT Inc. (TEL) remained the market leader when it comes to broadband services after posting double digit growth in revenues and subscriber count. TEL attributed 66% of the new subscriber to the rollout of its fiber-to-the-home (FTTH) lines. Revenue and new subscriptions for broadband jumped by 12% and 10%, respectively. TEL is looking to expand its FTTH service in the through the PLDT Fibr Smart Cities program.

Shakey's Pizza Asia Ventures, Inc. (PIZZA) is looking to expand in the Asia Pacific region upon the opening of its 200th store in Paseo de Magallanes, Makati City. For 2017, PIZZA will open one branch in Kuwait and will open at least nine more as part of a deal with Aljeel Capital. However, PIZZA will look into consideration of carefully expanding in Asia amid inquiries from interested investors.

Energy Development Corp. (EDC) got the approval of SEC for the dissolution of EDC’s inactive wholly-owned subsidiary, EDC Drillco Corporation. No other information was added.

SFA Semicon Philippines (SSP) received P56.43mn cash as part of its receivables under the discounted electricity incentive granted by the government. The collection will increase the SSP's cash and cash equivalents by approximately US$1.13mn.

Pryce Corp. (PPC), through subsidiary Pryce Gases Inc. (PGI), is boosting storage capacity of its liquefied petroleum gas (LPG) terminals in three locations in the Visayas and Mindanao regions – Sta. Cruz, Davao del Sur; Balingasag, Misamis Oriental; and Sogod, Cebu. The Davao del Sur terminal will have an additional 1,200 metric tons (MT) on top of its existing 2,200 MT capacity which will be completed in September, while another 2,000 MT will be built in the 1,100-MT terminal in Balingasag, Misamis Oriental and an additional 1,200 MT will be added to the existing 2,590-MT terminal in Sogod, Cebu. Both expansion works will be completed in May 2018.

Viventis Search Asia said that aims to lead the disruption in the recruitment business as it pivots to a career-centric and people-first approach. Viventis currently provides human resources services such as executive search, recruitment outsourcing, employee assessment, and training and development. It also added that it could possibly go public in 2020 after the launching of its recruitment app.

The central bank (BSP) approved the registration of 2 companies to operate bitcoin exchanges as part of its efforts to regulate the virtual currency industry. Meanwhile, BSP is also set to issue an information technology (IT) risk management framework to upgrade its basic framework under Circular 808 issued in 2013.

The Securities and Exchange Commission (SEC) cautions the public to be careful of online lending companies that operate on social media such as Facebook, Twitter, and LinkedIn, among others, as it has been receiving complaints that bogus online lending companies would close all communication lines with borrowers and delete all negative comments against them after receiving a processing fee.

Manuel Pangilinan (MVP) is urging to government to lift its 2012-dated moratorium on drilling and exploration in the West Philippine Sea as bilateral ties with China have ‘significantly improved’. MVP’s Forum Energy holds a 70% stake in Service Contract 72, which covers Recto (Reed) Bank in the disputed territory. Once the ban is lifted, MVP says they would be talking to Chinese authorities to prepare for actual exploration or before the sending its boats to the area.

Tycoon Ramon Ang has offered to develop the Philippine National Oil Co.’s (PNOC’s) 500ha. property in Bataan, which is conveniently located near Petron Corp.’s refinery, according to PNOC President Reuben Lista. No further details could be disclosed at this point, but development would be energy-related and it could be joint venture between PNOC and Ramon Ang. Other Chinese and American investors are also interested in the property.