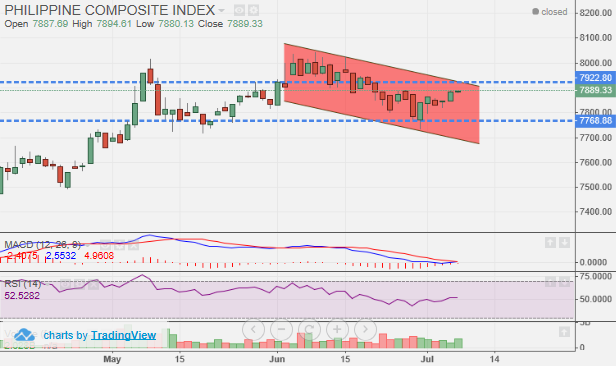 News Highlights: San Miguel (SMC) will be submitting an unsolicited proposal to build a $2bn flood control and waste-to-energy project. Globe Telecom, Inc. (GLO) spent $100mn in the Southeast Asia-US submarine cable system that goes from Los Angeles to Philippines via Guam. Meanwhile, Board of Investments (BoI) plans to upgrade its incentives to help raise the competitiveness of registered companies. Both the BoI and Finance Department (DoF) agreed on the principles of granting incentives that would involve a focused, performance-based, time-bound and transparent set of incentives.

Mart flat ahead of US jobs data, PSEi @7,889: Mart ended relatively flat as investors
turned cautious ahead of the release of US jobs report. PSEi closed marginally higher by 1 point to 7,889 (+0.01% day-on-day), with sectors ending mixed. Among activelytraded shares were: MBT (+P3.25 at P92.75); GTCAP (-P5.00 at P1,200.00); and SHLPH (-P0.15 at P69.20), on P6.90bn turnover. Losers outnumbered gainers, 104-102, with net foreign selling of P152mn.
Sentiment likely to be upbeat: Local bourse is set to start the week possibly with gains as optimism from the latest US upbeat jobs data could spill over into today's session. Meanwhile, with Q2 earnings season approaching, some investors might be on the lookout for companies with higher earnings expectations. Immediate support 7,855, resistance 7,915.

Shares rose following upbeat jobs data: Equities advanced after US jobs data showed an addition of 222,000 in June and a rebound in tech stocks. Unemployment rate, however, ticked higher to 4.4% from 4.3%.

Crude down amid output concerns: Oil prices tumbled as a rise in US crude production and a climb in oil rigs sparked concerns over how OPEC would implement its efforts in curbing crude output. West Texas Intermediate for August fell $1.29 to close at $44.23/barrel.

San Miguel (SMC) will be submitting an unsolicited proposal to build a $2bn flood control and waste-to-energy project. The project would involve the construction of a spillway that will facilitate the release of water from Laguna de Bay to Manila de Bay. Moreover, in exchange of the project, SMC will ask the government the right to use the waste materials from Laguna de Bay for its planned power generation facility.

Globe Telecom, Inc. (GLO) spent $100mn in the Southeast Asia-US submarine cable system that goes from Los Angeles to Philippines via Guam. This is set to commercially operate around 11 August. Total project is worth $250mn, which GLO contributed $100mn. The SEA-US cable was connected to the Globe cable landing station in Barangay Talomo, Davao City which also houses the power feed equipment necessary to run the system. The Globe Business Davao Data Center, which is linked to the SEA-US cable system, will cater to BPOs, financial institutions,internet service providers and other content providers in southern Philippines, and once completed, this will address ICT requirements of major trade and industry centers in Mindanao.

2GO Group, Inc. (2GO) submitted a restated audited financial results for its 2015 and 2016 financial statements, following the discrepancy of 90% and 74% for 2015 and 2016 statements of income, respectively. For 2015, the restated income registered P109.13mn, 90% lower from the P1.08bn earlier stated. On the other hand, 2GO recorded a net loss of P264.86mn, instead of a net income of P267.56mn. The company also appointed William Charles Howell as CFO, replacing Jeremias Cruzabra following his resignation.

MRC teams up with MEEC for RE venture:

MRC Allied, Inc. (MRC) signed an accord with Merge Energy and Environment Corp.to undertake renewable energy (RE) projects. MRC would be conducting due diligence within 60 days to make a decision to pursue the project with the latterfirm. MEEC is a private firm engaged in the business of exploration and development of RE resources. MRC targets to put up 1,000MW of renewable energy in the next 5 years. MRC’s foray in the energy sector is attributed to rising demand for electricity, increasing target of RE capacity and the opportunity to buy existing power plants

International Container Terminal Services (ICT) is pushing for at least 5 port projects this year to further expand its global presence. ICT are looking into 3 ports in Africa, 1 in Asia and 1 in an undisclosed location. The move to add more terminals could help minimize the impact of risks in other ports they operate.

Dennis Uy group, Udenna Corp. completed the acquisition of Enderun Colleges, Inc. as part of its growth strategy to develop the country’s human capital, which is vital to the economy’s further growth. Prior to Enderun, Udenna also invested in a maritime training school to support its shipping and logistics business.

Board of Investments (BoI) plans to upgrade its incentives to help raise the competitiveness of registered companies. Both the BoI and Finance Department (DoF) agreed on the principles of
granting incentives that would involve a focused, performance-based, time-bound and transparent set of incentives.

May production likely improve to 7.8%:

May industrial production is expected to grow 7.8% YoY as manufacturers got a boost from improved global and robust domestic demand. NEDA remained positive despite slower growth of 5.9% in April. Moreover, the ‘Build Build Build’ infrastructure program could provide additional boost in manufacturing sector as it would further increase construction activities in the country.