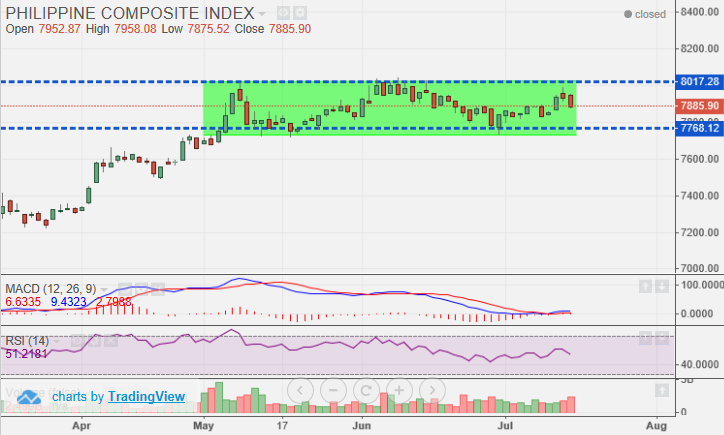 News Highlights: Metro Pacific (MPI) is interested in joining the bidding of the operations and maintenance (O&M) component of the Clark International Airport's proposed new terminal. Semirara Mining and Power (SCC) disclosed that it hired 387 personnel for key positions in its Semirara Island mine site to support expansion plans. Meanwhile, former Energy Secretary Carlos Petilla joins the board of MRC Allied (MRC) as the firm ventures into renewable energy (RE). Petilla has been named chairperson of the Risk and Oversight Committee.

Might trade slightly higher: We might see our local bourse trading with modest gains as investors await the release of 2Q corporate earnings. Also, the market might try to breach the psychological resistance of 8,000 and build a solid support moving forward. Immediate support 7,850, resistance 8,050.

Marts soared anew ahead of 2Q earnings: Bourses across the region traded mostly higher as investors anticipate the release of 2Q17 corporate earnings.

Crude up amid increasing global demand: Oil prices sustained momentum as the strengthening demand slowly offsets the global glut. Baker Hughes reported a 2 rigs increase to put the total oil rigs operating in the US to 765. West Texas Intermediate (WTI) added $0.46 to close at $46.54/barrel.

Metro Pacific (MPI) is interested in joining the bidding of the operations and maintenance (O&M) component of the Clark International Airport's proposed new terminal. The P12.55bn airport expansion project is an 82,000sqm terminal bulding that will be designed to accommodate 8mn passengers a year, nearly double the current 4.2mn capacity, and should be completed by 2019.

Semirara Mining and Power (SCC) disclosed that it hired 387 personnel for key positions in its Semirara Island mine site to support expansion plans. SCC plans to increase coal production to 16mn MT in the next 2-3 years from 11.9mn MT in 2016.

Filinvest Land (FLI)'s credit rating for its P29bn bonds was maintained at PRS Aaa by PhilRatings. This was on the back of FLI's strong income generation and positive cash flows, its established brand name and track record with geographically diverse real estate products and substantial land bank for future expansion, and its sound growth strategies focused on building a balanced mix of real estate sales and recurring income.

Cebu Landmasters (CLI) booked a total of P2.87bn of reservation sales for 1H17, almost breaching its full year 2016 reservation sales figure of P2.94bn. This was driven by sales from new launches. 38 Park Avenue has already sold out 60% of its inventory, while MesaTierra sold over 80% since launching in March this year.

Former Energy Secretary Carlos Petilla joins the board of MRC Allied (MRC) as the firm ventures into renewable energy (RE). Petilla has been named chairperson of the Risk and Oversight Committee.

PH looking to secure FTA with US:

Trade Undersecretary Ceferino Rodolfo expressed interest in enhancing the Philippines’ market access to the US via a free trade agreement (FTA), now that the US is not part of the Trans- Pacific Partnership. Details of which are now being looked into. The US is the PH’s 3rd major trading partner, 2nd biggest export market, and 3rd top import supplier.

The administration seeks to abolish the Home Guaranty Corp (HGC), a state-owned housing guarantee agency that’s an integral component of the government’s shelter program since 1950. The Commission on Audit has found HGC incurring billions in losses due to mismanagement and corruption.

The government accepted 6 proposals to use water from Laguna de Bay to produce power using pumped storage hydroelectricity. Among shortlisted firms were Citicore Power Inc. and listed Phinma Energy (PHEN). The range of capacity targeted by the proponents is from 400-600 MW. The final figure will depend on the outcome of their feasibility studies.

Despite substantialcapital outflows and the weak peso, Deutsche Bank sees the Bangko Sentral ng Pilipinas (BSP) maintaining the amount of funds held by banks in their cash vaults. The BSP remains committed to a medium-term reduction of the reserve requirement ration (RRR) from its current level of 20%, and the bank could time the adjustment to the US Fed’s balance sheet reduction which might happen at the latter part of the year.

MICC will shortlist a team of mining experts in their meeting on 25 July to review all mining operations in the country. MICC has compiled a list of people to be tapped and will select them on the basis of the earlier approved qualifications which disallow the inclusion of those employed, or involved with operating mines and/or any anti-mining group.