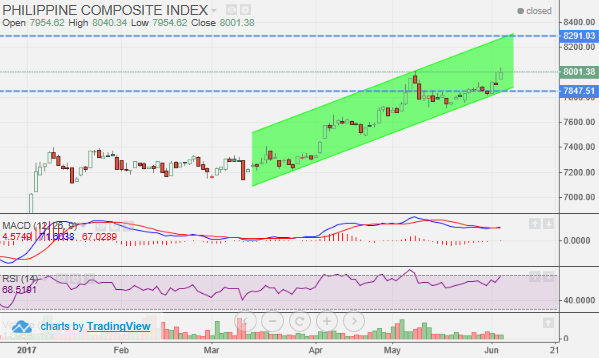 News Highlights: SM Prime (SMPH) breached its P1tn market value amidst favorable market outlook. On the economic front, the World Bank expects economic growth for the Philippines to grow at a steady growth of 6.9% this year and in 2018, driven by public and private investment. Meanwhile, the Bangko Sentral ng Pilipinas (BSP), together with Otoritas Jasa Keuangan (OJK), of Indonesia have signed the Letter of Intent (LOI) to commence negotiations under the ASEAN Banking Integration Framework (ABIF).

Back to 8,000, PSEi @8,001: Local equities managed to breach the 8,000 level, mirrored by Wall Street ascent last Friday. PSEi climbed 93 points to 8,001 (+1.19% day-on-day), with all sectors in the green, primed by financials (+1.57%) and services (+1.39%). Among actively-traded shares were: TECH (+P0.20 at P23.50); ALI (-P0.40 at P40.90); and SM (+P22.50 at P790). Turnover reached P8.6bn, with gainers outnumbering losers, 116-80. Net foreign inflows remained strong at P965mn.
Mart might retreat: Market might retreat as a knee-jerk reaction on the latest news of Middle East countries severing ties with Qatar. Thus far, the administration stated that the Philippines is maintaining its diplomatic ties, but investors might want to wait on further actions revolving the situation, given that a number of Overseas Filipinos are working in Qatar. Meanwhile, global geopolitical tensions might opt investors to remain cautious with the lack of positive catalysts pushing the market to trade higher. Immediate support, 7,950, resistance at 8,030.

Rising tensions spooked oil futures: Oil prices dipped as Saudi Arabia Egypt, Bahrain and UAE severed diplomatic ties with Doha, Qatar on Monday amid accusations of Qatar meddling in their internal affairs and backing terrorism. Speculations then arose that the rising tensions between the OPEC members could lead to the output cut agreement to fall apart. West Texas Intermediate (WTI) for July delivery fell $0.26 to settle at $47.40/barrel.

San Miguel (SMC) submitted an unsolicited proposal to extend the South Luzon Expressway (SLEx) from Batangas to Tagaytay. SMC via South Luzon Tollway Corp., submitted it last 27 February for the construction of an alternative 29km tollroad, referred as the Tanuan-Tagaytay Expressway.

DMCI Holdings, Inc. (DMC) is looking to establish cement production facilities across strategic locations in the Philippines. These manufacturing facilities will provide cement requirements of its construction and real estate units. The estimated cost for the facility will be around $340mn and could have a combined capacity of 5,000mt per day.

GMR-Megawide Cebu Airport Corp. teamed up with Uber Systems Inc. to provide a safer and faster ride to passengers in Cebu. With the simple push of a button, passengers going to and from the airport can now get a ride using Uber’s taxi service. Meanwhile, recall that GMR-MWIDE Consortium in December 2013 won a 25-year concession agreement that involves the renovation of the Terminal 1 of Mactan Cebu airport.

Marcventures Holdings (MARC) and Asia Pilot Mining entered into a Term Sheet in relation to merge Asia Pilot, BrightGreen Resources Holdings (BHI), and MARC with the latter as the surviving entity. MARC agreed to issue 675mn shares at P2.20/share equivalent to P 1,485mn in favor of the shareholders of Asia Pilot. MARC and the shareholders of BHI, on the other hand, has yet to finalize their agreement.

The World Bank expects economic growth for the Philippines to grow at a steady growth of 6.9% this year and in 2018, driven by public and private investment. World Bank's report noted that the country's expansionary fiscal policy has boosted capital formation, and remittances, credit growth, and low inflation have bolstered private consumption.

BSP and OJK of Indonesia to start talks on ABIF:

The Bangko Sentral ng Pilipinas (BSP), together with Otoritas Jasa Keuangan (OJK) of Indonesia, have signed the Letter of Intent (LOI) to commence negotiations under the ASEAN Banking Integration Framework (ABIF). BSP plans to discuss and exchange views regarding the banking system's regulatory framework and related issues. Also, the ABIF will enable banking integration for the establishment of Qualified ASEAN Banks (QABs).

The Bureau of the Treasury awarded P15bn from its Treasury bills (T-bills) offering. The offering was more than three times oversubscribed as the tenders reached P51.8bn for the P15bn offering. The 91-day T-bills received P25bn in total bids as average yield declined by 4.5bps to 2.103%. For the 182-day, the P5bn offering received P14.7bn tenders, with average yield declined by 3.8bps to 2.456%. Lastly, the 364-day T-bills fetched P12.1bn tenders, as rate reached 2.85%, 1.5bps higher from the previous offering.

PAGCOR to cut offshore gaming firms down to 50:

The Philippine Amusement and Gaming Corp. (PAGCOR) is looking to reduce the number of Philippine offshore gaming operators in the country to 50, to avoid the oversaturation in the market. Currently, PAGCOR has issued 42 offshore licenses, while pending applications have been reduced to 12 from the previous 44.