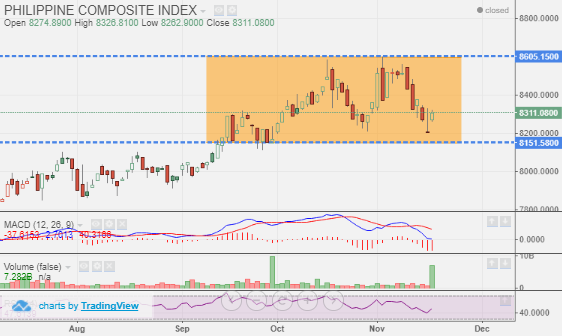 Asian  marts  gain  ground: Asian bourses were mostly up last session taking cue from Wall Street’s upbeat performance. Chinese shares likely to be in focus after a warning by state media that one of the nation’s hottest stocks was climbing too fast triggered a selloff.

Shares lower: U.S. equities dropped on Friday, when the gap between two-­and 10-­year Treasury yields hit the tightest level in a decade, adding to concern about the pace of future economic growth. Volumes may be lower than average this week due to the Thanksgiving holiday in the U.S.

Crude  prices  higher  on  shutdown  of  major  pipeline:  Shutdown of major pipeline in the US & expectations for an extended curb on production lifted oil prices. West Texas Intermediate (WTI) inched up $1.41 to $56.55/barrel.

ABS­‐CBN  Corp. (ABS) is reviewing its mobile venture with Globe Telecom (GLO), with losses seen at P100mn for 2017 (vs P1bn initial estimate).  The service was launched 2013 with GLO providing the infrastructure & ABS pays a fee for its use.   ABS has gathered mobile subscribers  of 946,000 as of Sept.

Dennis Uy’s Udenna Group, owner of listed companies Chelsea Logistics Holdings Corp. (CLC) and Phoenix  Petroleum  Philippines,  Inc.  (PNX),  announced  its  strategic expansion  of a 177-­ha property in the Clark Freeport Zone after buying out Global  Gateway  Development  Corp.  The  property  would  be renamed  to Clark  Global  City,  with  locators  to  enjoy  tax  benefits  from  the  Freeport Zone  and  anchor  projects  such  as  Medical  City.  It  will  have  more  than 52,000 square meters of office spaces, ready for occupancy.

Basic Energy Corporation (BSC) signed a non­‐binding term sheet with VEPC of Thailand, for the possible purchase of 12.5% equity.  VEPC’s units have been awarded the engineering, procurement & construction (EPC) contract of a solar farm in Myanmar.

MRC Allied, Inc. (MRC) signed a memorandum of understanding (MoU) with China Energy Engineering Corp. Ltd. (CEEC) to explore the possibility of venturing into LNG in the Phils.

Triggered  by Unioil’s gas rollback of as much as P4.75/liter, diesel by P3.50/liter, the Department of Energy (DoE) reconvened a task force to probe the price adjustments made by industry players

The Philippine government prepares its 27-­‐Nov launch of $200mn renminbi‐denominated panda bonds that will be  exempt  from  documentary  stamp  tax  (DST).    Underwriter  is Bank  of China.

Business process outsourcing   (BPO)  firms  and  online  gaming   companies   are  driving   up demand  for office  space  in Metro  Manila,  leading  to record  growth  and high  occupancy  rates,  as per JLL, a leading  property  consulting  firm.  The BPO industry still accounts for bulk at 80%­‐90% of office demand.