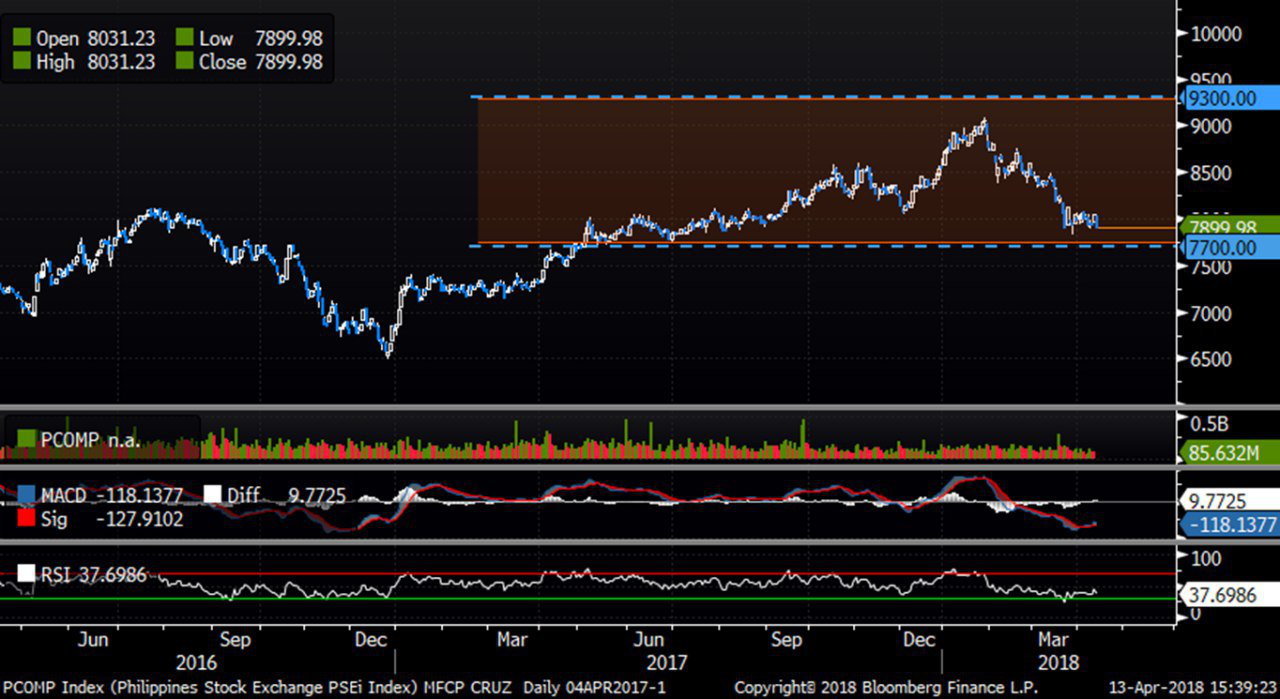 Bourse scored red, PSEi @7,899. Skeptics prevailed Friday, as supply pressure doused buying appetite from fund managers. The PSEi closed 143 points lower at 7,899 (-1.8%), led by holdings (-2.9%) & property (-1.7%). ALI (-P0.90 at P39.90); SM (-P48 at P940); AC (-P22 at P956); & MPI (-P0.22 at P4.93) primed declines among actively-traded stocks. Participation was modest at P5.91bn, with gainers-losers at 76-134.
Volatility seen. Fund managers might remain at bay early this week, with radars alerted on geopolitical headlines that could unfold following the missile attack over the weekend in Syria. Expect volatility to run high across securities markets (forex, bonds, equities) pending the trail of events on this issue. Meanwhile, this ‘excessive pessimism’ window is a good opportunity for contrarians, who are willing to bet for a resolution to the ordeal. Trade cautiously. Immediate support is 7,780-7,800, resistance 7,950-7,970.

SM Group is evaluating proposals for the P100bn development of the 600ha. Future City in Pasay-Paranaque. SM hopes to proceed with the project by 2H18. SM already obtained ECC & completing the rest of requirements so it can be issued a notice to proceed.

Ayala Corp. (AC)’s majority-owned Merlin Solar Technologies (MST) will produce lightweight solar panels by end 2018 in Laguna. These can be used for specialty rooftop applications in buses, trucks, utility vehicles with cooling needs, where there’s weight restrictions in putting heavy panels. MST will also work with IMI for projects related to mobility, Internet of Things (IoT) & energy in the Philippines.

Integrated Micro-Electronics, Inc. (IMI) will build a manufacturing facility in Nio, Serbia that will support growth for another 2-3 years. The Serbia plan will be an extension of IMI Bulgaria. The facility is seen to generate $250mn to the firm once completed by Sept/Oct. this year. IMI has 19 manufacturing plants in 8 countries.

Filinvest Development Corp. (FDC)’s FDC Utilities, Inc. teamed-up with DENR for a carbon sink program in Misamis Oriental. The man-made forest would also be a potential watershed or natural park that can a source of potable water. The project is in compliance with FDC Misamis Power’s 3x136MW circulating fluidised bed thermal coal plant in Villanueva town.

Philippine National Bank (PNB) completed its US$1bn medium-term note (MTN) program primed by Citigroup Global as lead arranger. The notes will be issued under the Singapore Stock Exchange (SGX). No other data was provided.

Manila Jockey Club, Inc. (MJC) will conduct a 1:2 rights offer in lieu of the earlier warrants optionapproved during the annual shareholders’ meeting last 29 June Price was set at P1/share, to raise P1.587bn. Proceeds will be for debt servicing. Meanwhile, MJC declared P0.05/share cash dividend, details of which to be announced

AgriNurture, Inc. (ANI) clarified to the Exchange, the issuance of 53mn primary shares to Alcione Family Office Services Co. Ltd. will be valued at P735.94mn, or P13.86/share. Alcione is based in Japan, engaged in trading, consultancy & asset management. Proceeds will be used as extra  working capital & for loan payments.

NAIA might be converted to a real estate zone:

Gov’t. is looking at converting NAIA into a real estate dev’t area as a gateway won’t last forever. Tugade said they’re looking into proposals to build airports outside of the capital, that includes Bulacan & Sangley Point, Cavite.

The Energy Bureau (DoE) is looking at 50- 50 mix between baseload & mid-merit plants to give more room for renewable energy (RE) projects coming on stream. The present baseload share is at 70% of total.

PEZA identified 137 new sites for ecozone covering 70,475ha. in the Phils. These are owned by PSLAM, Priv. & Mgmt. Office, Phil. Mining Dev’t & DENR, among others. 57% of the total area may be used for manufacturing, the others for IT parks, retirement ecozone.

DENR chief wants Boracay to be declared as critical habitat:

The proposed Critical Habitat area would cover 750.96ha., of which 119.85 are forest land, the rest as coastal marine areas. This would cover location of Shangri-La Boracay; Movenpick Resort; Alta Vista of Consunji family & Costa Vista of the Villar Group. The others within this zone covers Filinvest’s Crimson Resort; SMC; Seven Seas Water Park.