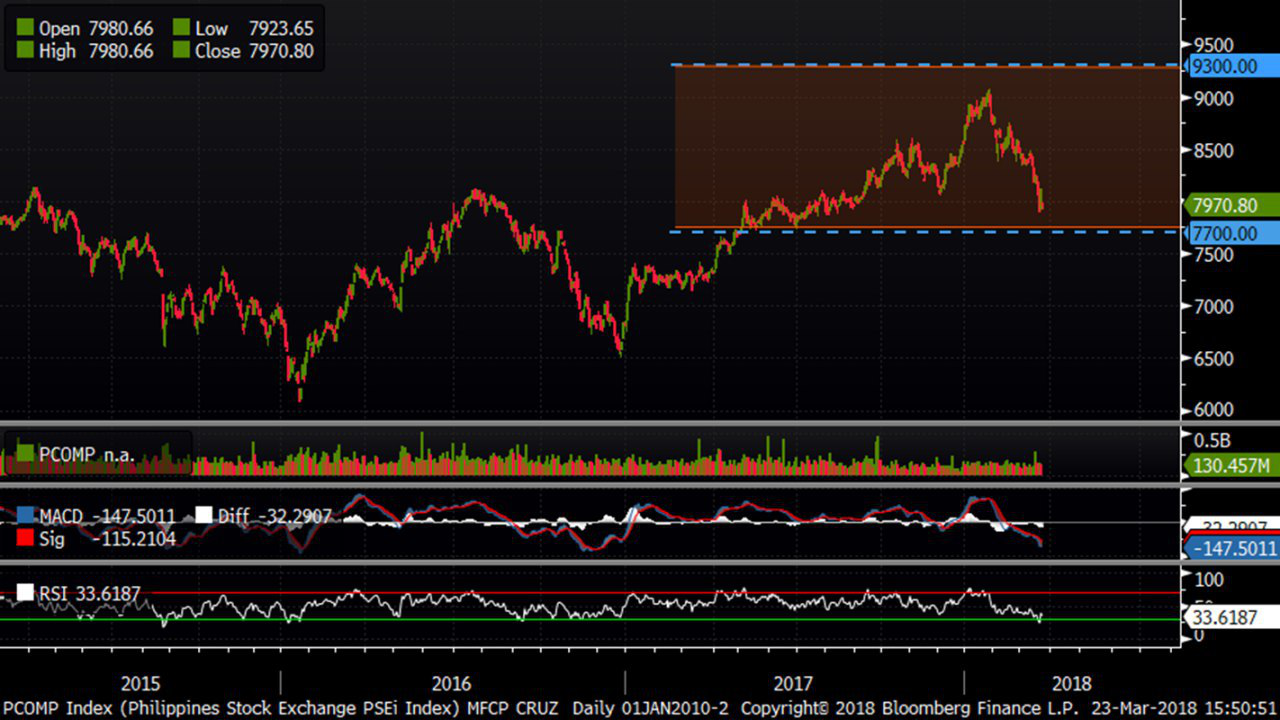 Frail reaction seen. Local players might opt to remain at bay, while checking regional markets’ reaction to Wall Street’s 424-point drop last Friday. Clarity how this trade spat will be resolved between US & China remains hazy, paralleled with the long Easter break. Wait for accumulation to gradually unfold as the mart settles at a bottom. Immediate support is 7,800-7,850, resistance 7,980.

Robinsons Retail Holdings, Inc.’s (RRHI) board approved the purchase of Mulgrave Corp. BV’s(MCBV) 100% stake in Rustan Supercenters for P18bn. This will be made via a share-swap arrangement. Also, London-based Dairy Farm will be a partner in RRHI’s food retail business. Post-transaction, Dairy Farm through MCBV, will own 18.25% of RRHI, the Gokongweis at 51%.

PNX to improve FamilyMart by 2019:

Phoenix Petroleum Philippines, Inc. (PNX) aims to improve FamilyMart’s operations by 2019 by improving supply chain deficiencies, among others. FamilyMart lost P356mn in 2017 & PNX was allowed by FamilyMart of Japan to open 2 new stores for 2018.

Phoenix Petroleum Philippines, Inc. (PNX) allotted P5bn in capex for 2018 for its service stations, storage, logistics assets & IT. From its 530 retail network base, PNX aims to open 50 each year.

Mitsubishi will continue to collaborate with Ayala Corp. (AC), even after retaining 8.78% in the latter. After unloading 8.5mn shares at P934 apiece, Mitsubishi said the move was part of their portfolio rebalancing. An official also said there is no plan to further reduce its stake in AC at this time.

Prime Orion Philippines, Inc.’s (POPI) board approved the purchase of 75% of Laguna Technopark, Inc. (LTI) from Ayala Land, Inc. (ALI) in exchange for additional POPI shares. The transaction was valued at P3bn, which will cover the issuance of 1.225bn POPI shares to ALI in return for 30,186 LTI shares. This would bring ALI’s ownership in POPI to 63.9% from 54.91%. LTI has 460ha. Laguna Technopark in Sta. Rosas & Binan, plus 118ha. Cavite Technopark in Naic. Target date of execution is April 2018.

Energy Development Corp. (EDC) signed a 15-year financing agreement with IFC for US$90mn. Proceeds will finance part of 2018 capex & other requirements. The capex will include geothermal plants in Leyte affected by July 2017 earthquake.

Robinsons Land Corp. (RLC) & Shang Properties, Inc. (SHNG) signed an agreement to form a JV firm that will be 50-50 owned by each party. No further details were given.

Sta. Lucia Land, Inc. (SLI) notified the Exchange that the Armed Forces of the Phils. Retirement & Separation Benefits (AFPRSBS) issued a Notice of Award to SLI for a property in Iloilo City. No other details were given.

IDC gets loan from Landbank:

Araneta Center (ACI) will launch a budget hotel that will have 300 rooms. Price point will be lower than Novotel Manila & will cater to millennial. ACI has prepared P50bn redevelopment for the next 10-15 years for the 35ha. Cubao, QC property.

After earning P105mn in net income in 2017, DMCI Holdings, Inc. (DMC) unit DMCI Mining sees modest growth in 2018, pending resolution of its appeal with the Office of the Pres. on the suspension & closure orders for Berong Nickel (BNC) & Zambales Diversified Metals (ZDMC) last June 2016 & Feb. 2017, respectively. Earnings were obtained after DENR allowed suspended mining firms to ship out their stockpiles to limit accumulation of silt in nearby bodies of water. If nickel prices remain at current levels, DMCI Mining sees double-digit growth in net income.

Phinma Corp.’s (PHN) board appropriated P1bn retained earnings for investment in the Education& Construction materials business until 2019 plus P300mn for the buyback of shares of the firm until Dec. 2019.

Manila Jockey Club, Inc.’s (MJC) board approved to raise the authorized capital of fully-owned Manila Cockers Club (MCCI) from P10mn to P500mn. MJC will subscribe to at least 25% of the capital hike at P1/share.

ABS-CBN Corp. (ABS) will open its Hollywood-style studios in Bulacan this May. The firm invested P600mn for the 2 sound stages on 15ha. lot in San Jose del Monte. The plan is to build 10 sound stages.