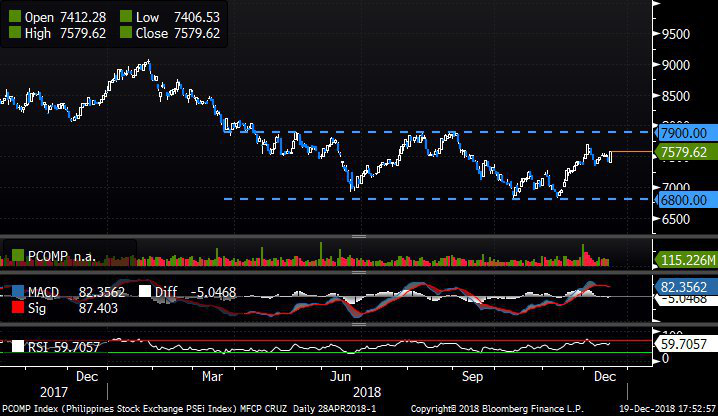 Seizing an advance: Sellers might seize the recent advance to cash out, as attention might be swayed to regional markets’ reaction to the Fed’s 25bps rate hike move. Prospective last-minute push however, might still allow sessions to finish with few gains, or limit its decline. Funds flow would skew on net foreign flows, especially for large caps. Immediate support is 7,500, resistance 7,600.

Marts mixed: Asian stock markets were mixed Wednesday as market players are on their toes ahead of the last US FOMC meeting this year with uncertainties on Fed’s next moves as well as weaker-than-expected Japanese trade data.

Transpo USec. Reinoso said Villar Group submitted an unsolicited proposal to operate, maintain & expand Iloilo int’l. airport. Reinoso said the project has been endorsed to Civil Aviation Authority for grant of original proponent status, which will be subjected to a Swiss challenge thereafter.

PNOC chief Lista admitted that as a GOCC, PNOC is bound by stringent gov’t. regulations that include obtaining budget approvals, which restricted its proposed LNG terminal plan. Lista said this in response to DoE Sec. Cusi’s statement that he would have proceeded with the project & sought partners later. Lista also denied that PNOC is far from being non-performing.