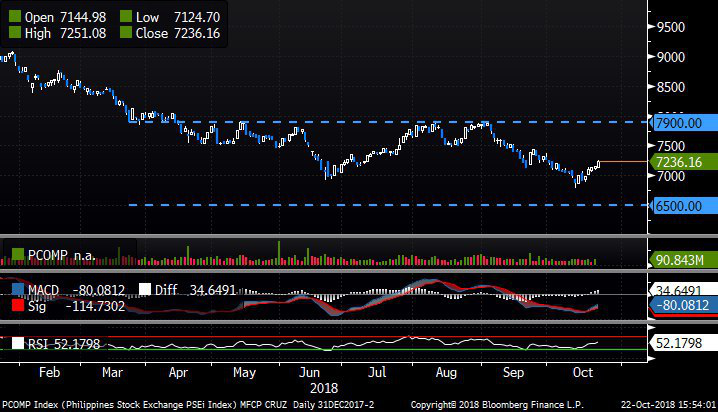 Ayala Corporation (AC)'s Infrastructure Holdings launched its 60-40 JV firm, Entrego Fulfillment Solutions, with Brillant 1257 GmbH & Co. Virtue Verwaltungs Kg as partner. The investment is P1bn until 2019. Entrego started as logistics unit of Zalora before its transformation to a JV firm. From 45 distribution hubs, Entrego aims to raise this to 60 by 2019.

Cosco Capital Inc. (COSCO) sold last 19 Oct., its shares in Liquigaz & Calor Phils. Holdings to Fernwood Holdings. No exact value was mentioned, but hinted it as less than 12% of COSCO’s P112bn asset.

PAL Holdings, Inc. (PAL) aims to start its ferry service for Kalibo & Boracay by the last week of October. This will be done via PAL subsidiary, Mabuhay Maritime Express Transport that was set up in Aug. 2016 through new 42-meter catamarans.

IRC Properties, Inc. (IRC) intends to have its ceremonial ground breaking for the $3.7bn Makati Intra-City Subway project this Nov. or Dec. The project has already been subjected to Swiss challenge & no proposal was submitted. Capacity estimate is 700k passengers daily, with local banks offering to provide financing.

Energy Sec. Cusi said PCOR should offer low-priced fuel directly to the public, given the latter’s offer to import 50k MT diesel that would be P5/liter cheaper vs. pump prices. No official comment has been given by PCOR on the matter.

PNOC formally invited bidders to become its JV partner for the proposed liquefied natural gas (LNG) in Batangas. Deadline for submission of eligibility is 21 Dec., pre-bidding on 16 Nov.

Sen. Committee on Energy chair Gatchalian said he would push for the retention of privileges granted to oil & gas contractors under TRABAHO bill. The House version of the bill did not repeal perks under Pres. Decree (PD) 87, promoting discovery & dev’t. of petroleum resources, & the Senate has yet to come up with its version.