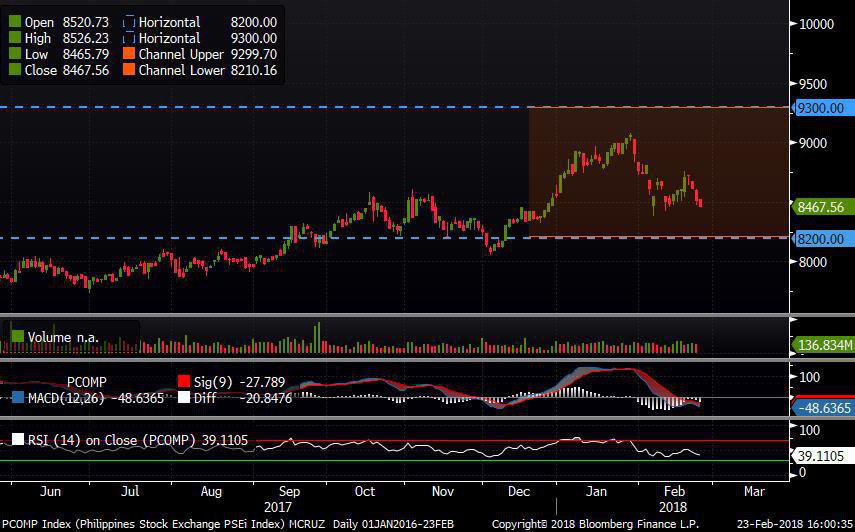 News Highlights: The Philippine Stock Exchange, Inc. (PSE) 1:6.3847 rights offering will be priced at P236.20/share. SEC will release within the week results of its probe on 2GO Group, Inc. (2GO)’s F/S. Now Corp. (NOW) affiliate, NOW Telecom Company, secured an extension of its legislative franchise for another 25 years, or until 2043, for its telco license.

PSEi finished lower @ 8,526. Attempts to make a last-minute lift when the mart rose to as much as 8,526 were foiled by profit-taking, pulling local gauges 48 points at 8,467 (-0.56%). Major counters were down led by financials (-1%) & property (-0.95%), due to fears of potential hike in the Fed rate. Second- & third-tiers captured 23% of P8.85bn turnover, as market breadth favoured pessimists, 122- Turnover was P9.24bn.
Upward movement imminent. The local bourse looks set to track Wall Street’s ascent as U.S. investors begin to shrug-off some inflation anxiety. Eyes are on slated analyst briefings today for index members SCC, BDO & MER (approx.. 10% combined share in PSEi basket) as investors assess on 2018 prospects. Immediate support is at 8,500, resistance 8,600.

Regained composure. Asian stocks on Friday were able to recover from midweek losses, closing the week with a reversal of declines stoked by interest-rate worries.

Oil ends higher. Oil held on to gains Friday, after data of one additional rig this week was announced, pushing crude to finish on its second consecutive weekly gain. West Texas Intermediate (WTI) climbed $0.91 at $63.55/barrel.

Clark Airport O&M will be subject to bidding:

Findings on 2GO out this week:

SEC will release within the week results of its probe on 2GO Group, Inc. (2GO)’s F/S. If violation is found, 2GO might be slapped with a fine of at least P1mn plus extra P10k for each day since the wrongdoing was discovered.

Now Corp. (NOW) affiliate, NOW Telecom Company, secured an extension of its legislative franchise for another 25 years, or until 2043, for its telco license.

Golden Haven Memorial Park, Inc. (HVN) shareholders approved 20 Feb. 2018 the change in its name from Golden Haven, Inc. to ‘Golden Bria Holdings, Inc.’ Despite the name change, the company’s stock symbol will be retained at HVN.

PHEN-NGCP gets PA clearance from ERC:

A provisional authority (PA) was granted by the ERC to Nat’l. Grid Corp. of the Phils. (NGCP) & Phinma Energy (PHEN). This covers ancillary services that will support NGCP’s transmission.

Alsons Consolidated Resources, Inc. (ACR) sought intervention from the Energy bureau (DoE) to connect its Sarangani power plant (SaEC) to NGCP. ACR said their request has been pending for 15mos. already. SaEC is contracted to provide 105MW to distribution utilities in Mindanao.

Manuel V. Pangilinan (MVP) welcomed the formation of a special panel that could pave the way for joint exploration in the West Phil. Sea. The Recto Bank (SC72) is estimated to contain 16.6tn cubic feet of gas & 416mn barrels of oil.

Congress is probing on potential non-compliance from PT&T on its congressional franchise, after being sold by its former owners to the group of Salvador Zamora & Benjami Bitanga, without approval from Congress.

Changi Airport will get 30% in the NAIA Consortium project:

BIR filed its P1bn tax evasion complaint against Golden Donuts, Inc. (GDI) of the Prieto. The case covered only ITR & VAT returns for 2017. GDI meanwhile, said all their tax liabilities have been settled.