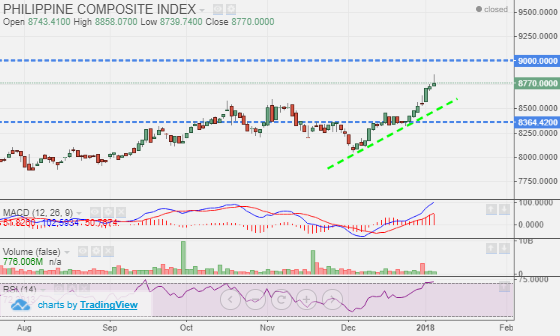 Optimism  on  next  tax  reform  package: Mart might trade higher as investors cheer ahead the submission of the next tax reform package which might propose to reduce the corporate income tax rate from 30% to 25% within the year, in addition to the expected steady inflation within 2%-­4% target. Immediate support 8,700, resistance 8,850.

Shares higher: South Korea stock market bounced higher again on Friday, one session after it had ended the four-­day  winning streak.   Meanwhile, Asian markets were positive, despite weaker than expected jobs data from the U.S. and a drop in crude oil prices.

Shares continue to rally: Wall Street continued to rally Friday, as lower‐than­‐expected rise in jobs data might prompt the Fed to stick to its gradual interest rate hike in 2018.

Oil  settles  lower:  Oil futures settled lower on Friday, losing a grip on the highest levels in three years, but prices still scored a third weekly gain a row on the back of a seventh-­straight drop in U.S. crude supplies and ongoing concerns over unrest in Iran. West Texas Intermediate  (WTI) dipped $0.57 to $61.44/barrel.

MER’s MGen in talks with Irish firm for A1E:

Metro Pacific Investments Corporation (MPI) will spend P10bn this year, mostly for its Cavite-­Laguna Expressway  (Calax) & C5 South Link projects.   Calax is set to open in 2020 or early 2021.   The firm is also waiting for the grant of original proponent status from the DPWH for the Cavite-­‐Tagaytay-Batangas Expressway.

First   Gen   Corporation   (FGEN)   confirmed   submitting   a proposal  to  PNOC  to  participate  in  FGEN’s  onshore  storage  & regasification terminal within the First Gen Energy Complex in Batangas City.  The terminal will have 5mn tons per annum (mtpa) capacity.  FGEN started development work for the LNG terminal as early as 2012 & is positioned  to be ready for operations  prior to the termination  of the Gas Sale & Purchase Agreements.

International Container Terminal Services, Inc. (ICT)’s board approved the   issuance  by   Royal  Capital  BV   of   new   senior  perpetual  notes guaranteed by ICT. Terms of the float will be announced later.

PNX gets approval from PCC on purchase of FamilyMart:

Phoenix Petroleum Philippines, Inc. (PNX) obtained a decision from the Phil. Competition Commission (PCC) approving the purchase of 100% of Phil. FamilyMart CVS from SIAL CVS Retailers, FamilyMart Co. Ltd. & Itochu Corp.  PNX is also evaluating the viability of gas stations where it would put up FamilyMart units. PNX had 523 service stations as of Sept. 2017.

Lester Yu’s Lush Group plans to do an IPO in 1H18 to finance  its expansion  plan.   The firm offers fresh fruit juices & shares under Fruitas brand.  Details will be announced  soon.

DOF sets 15­‐Jan as submission for package 2 of CTRP:

The Finance bureau has set 15 Jan. as submission  date for package 2 of the tax reform program (CTRP). DoF wants corporate income tax rate lowered to 25% from 30%.

DOF hires experts from Dev’t Academy of the Phil. for MICC:

The Department  of Finance  (DOF)  hired  experts  from  the  Dev’t.  Academy  of the Phils. to form part of the 5 technical review team formed by the Interagency   Mining  Industry  Coordinating   Council  (MICC)  to  review  26 mining operations  that were ordered closed or suspended  by DENR during Lopez’s term. The review will take place this week.