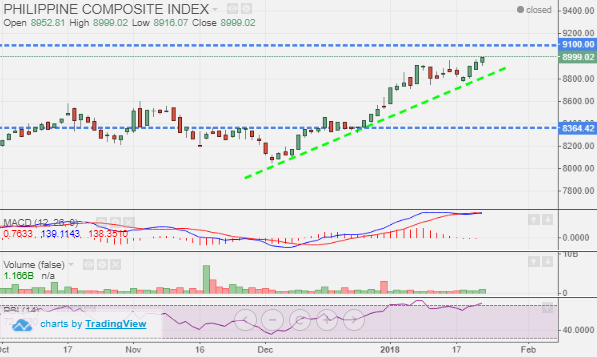 Marts heat up: Asian stocks powered higher Tuesday, building on continued records in the U.S. as the earnings season there began strongly and as investors shrugged off risks at home.

Oil ends higher: Oil up more than 1 percent, with benchmark Brent crude coming in at $70 a barrel for the first time in a week, following optimistic world economic growth prospects and expectations for continued production curbs by OPEX, Russia. West Texas Intermediate (WTI) climbed $0.98 to $64.47/barrel.

Posttakeover, MCT Bhd of Ayala Land, Inc. (ALI)-led Regent Wise Investment Ltd. (RWIL), will remain listed in Malaysia’s bourse. MCT Bhd (50.19%- owned by RWIL) will also comply with the minimum 25% public ownership on Malaysian firms. The move would allow ALI to expand in the Asean property sector, especially with MCT’s 540.2 acres of landbank (or 219ha.), of which 20.4 acres (8ha.) have been fully-developed.

China Banking Corporation (CHIB)’s corporate loan grew 17% in 2017 as a result of contribution from institutional banking units. The bank aims to build on this growth by leveraging on their network.

Bloomberry Resorts Corporation (BLOOM)’s board approved to purchase up to 2mn BLOOM shares at market, which will be given as reward to Solaire’s loyal patrons & for Solaire’s marketing plan. As a result, 50k shares were bought at P11.04 & 332,900 shares at P11.08 last 22 Jan.

VITA’s P1.52/share valuation for the additional issuance of 267.84mn shares cleared by SEC:

Vitarich Corporation (VITA) obtained SEC’s clearance for the valuation of P1.52/share, or P407mn, as full payment for the additional issuance of 267.84mn common shares. The shares have P1/share par value & APIC of P139.3mn.

Transpacific Broadband Group Int`l. Inc. (TBGI) will change its par value from P1/ to P0.10/share effective 30 Jan. 2018. The authorised capital will still be the same at P380mn. TBGI is engaged in cable & satellite broadcast with a 25-year congressional telco franchise in Clark Special Ecozone (CEZA).

Department of Energy (DoE) issued a circular revising the awarding process for petroleum service (PS) contracts by nomination through publication. Under the rule, applicants will nominate the areas of their interest & once approved by the review & evaluation committee, the applicant will publish the nominated area that will be subject to challenge by other parties.

LBP’s board approved to acquire a majority stake in PDS:

The Land Bank of the Philippines’ (Landbank or LBP) board of directors approved the move to acquire at least 66.67% common shares of Philippine Dealing System (Holdings) Corporation subject to compliance with all legal and regulatory requirements, putting the state bank in competition with the Philippine Stock Exchange (PSE) in this regard. Currently, the Landbank owns 1.56% of PDS through the Bankers Association of the Philippines (BAP).