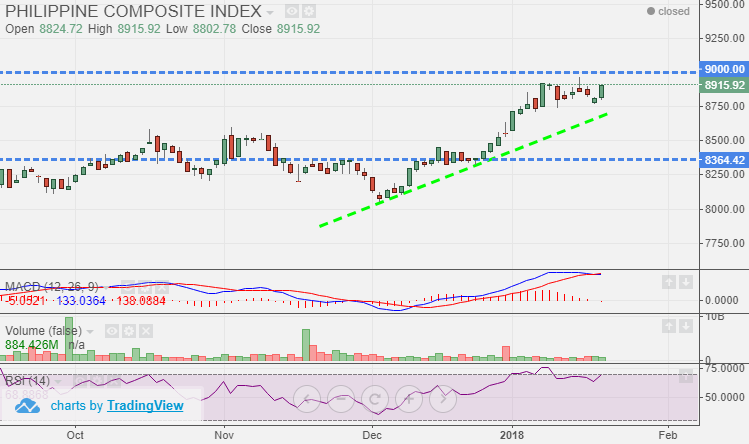 Shares  rallied:  US  equities  rallied  Friday,  as  traders  expressed  confidence  a  bill  will  be  approved to fund gov’t. operations to 16 Feb. & avert a shutdown.

Ayala Corporation (AC)’s board approved restructuring its energy units through the creation of a new holding firm, AC Renewables, & renaming the existing thermal holdings company to ACE Thermal, Inc.  AC CEO Eric Francia said they’re looking at scaling up to 1,000MW by 2020 from the present 300MW.  Meanwhile, AC Energy will be retained as a holding firm, with AC Renewables & ACE Thermal under it.

AC  Energy  DevCo  of  Ayala Corporation (AC) is planning 150MW diesel plant in Pililia, Rizal to meet the peaking & reserve requirement of Luzon grid.  The project is under pre‐dev process that includes securing an ECC.

PLDT Inc. (TEL) aims to close an outsourcing deal with US firm Amdocs which might be finished end-­‐Jan.   Amdocs provides digital & network transformation via innovative solutions.

LTG’s real estate arm ETON to venture into Hotel, one in Pasay and another in QC:

Eton Properties Philippines, Inc. plans to venture into hotel under its own brand, one will be in Pasay City, the other in QC.   The plan is to construct a 160­‐room  hotel within a P2bn, mixed­‐use project across Heritage Hotel in Pasay City.  The lot was bought by ETON from PNB.   Eton Hotel will also be construct a 400-room,  3­‐star hotel on 12ha. in Centris at the cor. of Edsa & Quezon Ave. that will cater to BPO executives who live in Bulacan & Pampanga.

PAL Holdings, Inc. (PAL) will have a re-­IPO in 2Q18, according to Mr. Lucio Tan, Sr. without further elaborating.

PepsiCo (PIP) & BBDO Guerrero launched Aquafina purified water, aside from Pepsi, Quaker & Frito Lay brands handled by the latter.  Aquafina is known as the world’s best‐selling brand & will be marketed by Pia Wurtzbach.

PTFC’s fully-­owned  Baesa Redevelopment (BRC) & Kombi Land (KLI) signed a subscription agreement last 19 Jan. 2018 for the purchase by BRC of 49,000 shares in KLI, or 16.33%, for P60mn.  The purchase is subject to SEC approval & increase in KLI’s authorised capital.

DFNN clarifies no definite accord has been made amid rumor Dennis Uy made P600mn investment related to casino:

DFNN, Inc. (DFNN) clarified to the Exchange they are open to investors who can add value to their business, but no definite accord has been made.   Unnamed sources claimed Dennis Uy allegedly made P600mn in investments in DFNN, which could be related to his casino venture in Cebu. No official comment has been given by Mr. Uy on the matter.

The Finance bureau (DoF) will submit a proposal to Congress by mid-­ year, for national gov’t. to assess land values for real property taxes (RPTs).   The committee will comprise LGU Finance, BIR & LGU to review local assessor’s property valuation.  This scheme meanwhile, will be revenue-­neutral for nat’l govt., but it will depend on the LGU how to apply percent of excess over valuation brackets.  Telcos will be required by government to lease cell towers from tower firms, instead of building their own sites.  Thus far, American Tower Corp. proposed to build these towers, with its $50bn planned investment.  DICT believes the move would be appreciated in the long‐term as telcos may free-up capital expense & concentrate in updating radios to improve service.   Guidelines will be formed next month, while agreement with telcos are seen 4Q18.   Implementation might take place either 4Q18 or early 2019.

Monetary authorities are looking to relax the single borrower limits (SBL) to accommodate bank lending for big projects according to Bangko Sentral ng Pilipinas (BSP) Deputy Governor Diwa C. Guinigundo. Currently, SBL limits credit exposure to a single client to a maximum of 25% of a bank’s net worth.

DoE to look into coal contracts to check provisions mandating pass-­on of costs:

The Energy bureau (DoE) will look into coal contracts of power producers to check if there are provisions mandating pass-­‐on of costs tied to excise taxes.  DoE also wants power generation firms to submit their coal inventories, to determine the resulting rate hike from the tax reform (TRAIN) in electric bills.

The Bureau of the Treasury plans to raise as much as P20 billion during Tuesday’s auction which are likely to fetch higher yields after 10‐year US Treasury yields rose to their highest levels in three years last week. The fresh three-­year T‐bonds set to mature on Jan. 25, 2021. Traders exepects the fresh papers to rise around 4% to 4.325%.