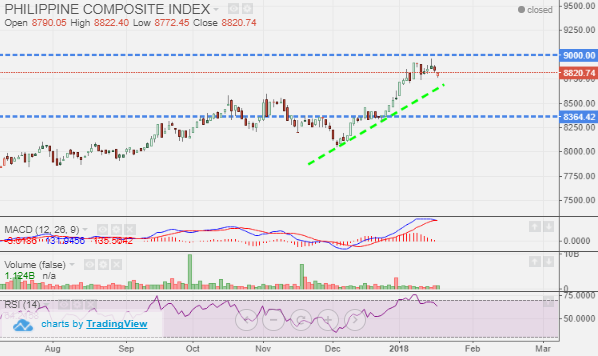 Might  trade  sideways: Investors might stay on the sidelines as they await relevant economic indications to  support a  rally, while some would opt  to  wait for  further corrections before positioning. Immediate support 8,760, resistance 8,900.

Shares  broadly  higher: Asian shares were broadly higher on Thrusday, aided by strength in Chinese  banks  and  tech  companies  and  after  fresh  record  highs  from  Wall  Street.  China’s economic growth also grew 6.9% in 2017, accelerating for the first time in 7 years.

Metro Pacific Investments Corporation (MPI) plans to buy 2-­3 logistics firms, with 1 likely for 2018, to expand its portfolio.   Earlier, MPI said it was talking to Alberto Lina for Air21 Express.

ALI agrees to waive royalties or AGP of P277mn/year for next 35 years in favor of gov’t:

Ayala Land, Inc. (ALI) agreed to waive royalties or Annual Grantor Payment (AGP) of P277mn/year for the next 35 years in favor of the gov’t., for the Taguig Integrated Terminal Exchange (ITX).  ITX is a 6-­storey building on 5.57ha. lot inside FTI compound that will house a passenger  concourse,  centralised  ticketing  &  retail  establishments. ITX can accommodate 1,200 public utility vehicles, with construction slated 2H18, operation 1H20.

Petron Corporation (PCOR) generated $401.957mn from its tender offer from holders of its $750mn, 7.5% undated subordinated capital notes.  Settlement will be on 22 Jan. PCOR will us its new issuance of $500mn senior perpetual notes to refinance debt at 4.6% interest.

The Philippine Stock Exchange, Inc. (PSE) got SEC clearance for its 11.5mn rights offer at P275 apiece.  Tentative date for the offer run is 5­‐9  Feb, listing on 23 Feb. The rights would reduce brokers’ ownership to less than 20%, as required under the SRC.

The inflation impact of the TRAIN law  would likely make the Central Bank revise its inflation  forecast (3.4%  this  year)  next  policy  meeting;  consequently,  BSP  may  have  rates hiked sooner than expected, within Q1 this year.

Tax incentives for airline firms to be removed once tax reform package 2 is  passed:

Airline  firms’  tax   incentives   will   be   removed   once   DoF’s proposed tax reform package 2 is passed into law.  Meanwhile, DoF wants to keep PAL’s franchise fee of 2% of gross revenues from all income sources,  whether  transport  or  non­‐transport  income. Incoming international passengers, freight & mail, will not be subject to tax.  On CEB’s congressional  franchise, the clause ensuring the airline enjoys a level playing field in the industry in terms of tax treatment, is removed.

By end­‐March, TV5 will close its Interaksyon news portal website as part of rationalisation efforts.    All digital  news  will  be under  news5.com.ph.  The  move  would also affect 20 regular staff.