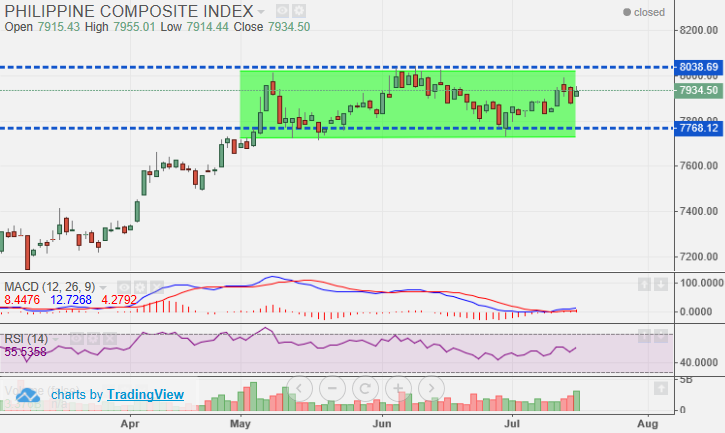 News Highlights: SN Aboitiz Power Group SNAP), a unit of Aboitiz Power (AP), is optimistic that it can secure all the required permits for its 350MW Alimit hydroelectric power facility in Ifugao bedore 2017 ends, while Manila Water Total Solutions is expanding its bottled water business outside Metro Manila buoyed by the rapid expansion of its distribution network. Ramon Ang, President of San Miguel Corp. (SMC), has been offered by the Prieto family the sale of majority shareholdings in the Inquirer Group, which owns Philippine Daily Inquirer. On the economic front, personal and cash remittances recovered in May after dropping sharply in April.

Trading a range: Mart still treads sideways as the market waits on 2Q earnings to justify any big market movement. With the lack of catalysts, investors are seen to continue trading within a range. For now, we suggest to buy on dips and sell on opportunities, while waiting for further guidance. Immediate support is 7,900, while resistance at 7,970.

Most bourses higher: Most marts ended higher amid easing concerns on a possible Fed rate hike. Meanwhile, China stocks bucked the trend over news of a tighter monetary policy despite the announcement of a better-than-expected GDP of 6.9%.

AP power unit to secure all permits by end 2017:

SN Aboitiz Power Group SNAP), a unit of Aboitiz Power (AP), is optimistic that it can secure all the required permits for its 350MW Alimit hydroelectric power facility in Ifugao bedore 2017 ends.
Ramon Ang to acquire 85% stake in Inquirer: Ramon Ang, President of San Miguel Corp. (SMC), has been offered by the Prieto family the sale of majority shareholdings in the Inquirer Group, which owns Philippine Daily Inquirer. Ang will undertake a due diligence review soon before making the decision.

Manila Water Total Solutions is expanding its bottled water business outside Metro Manila buoyed by the rapid expansion of its distribution network. Its brand, Healthy Family, would offer in 5 gallon and 500mL bottles to Laguna and Pampanga by 2018, as it plans to open 2 new water purifying and bottling facilities, amounting to around P500mn in capital expenditures. Their customer base is now at 100,000 with close to 300 distribution partners since it commenced in 2015. Manila Water Co. (MWC) is the parent firm of Manila Water Solutions.

Rockwell Land (ROCK) signed a joint venture agreement with real estate company, Mitsui Fudosan, for the development of the residential component of its project in QC called The Arton by Rockwell. Under the agreement, Mitsui will have a 20% stake in the P9bn project. The Arton, located in 1.9ha lot in Katipunan, will have a total of 1,700 units.

Cebu Air, Inc. (CEB) is looking to exceed its 80% - 85% projected load factor for Philippines-South Korea flights. From January to May, CEB has an average passenger load factor of 78.6% for its Manila to S. Korea flights. Currently, CEB has flights from Manila to Incheon, Manila to Busan, Kalibo to Incheon and Cebu to Incheon. Also, travel agencies have started moving to secure seats, despite the declaration of Martial Law in Mindanao, which caused around 3,000 booking cancellations.

The Department of Environment and Natural Resources (DENR) will file a criminal complaint against Ipilan Nickel Corp., a subsidiary of Global Ferronickel Holdings, Inc. (FNI), regarding its tree-cutting activity in Brooke's Point, Palawan. The agency is also looking at Ipilan's involvement in the illegal construction of a mine yard road. The initial complain came about as Ipilan cut 677 trees composed mostly of hardwood species, outside the covered area of the permit.

PHN's tender offer will not push through:

Phinma Corp's (PHN) unit PHINMA Education Holdings (PHINMA Education) has decided not to proceed with its tender offer to acquire at least 55% of Laguna College of Business and Arts (LCBA) after determining that less than a majority of the stockholders of LCBA will sell their shares.
VLL pegged 7-year rate at 5.7512%, 10-year at 6.2255%: Vista Land (VLL) sets interest rate for its Philippine Peso-denominated Fixed Rate Retail Bonds at 5.7512% and 6.2255% for 7-year due 2024 and 10-year due 2027, respectively. The Bonds in the aggregate principal amount of P3bn with an oversubscription option of up to P2bn will be issued out of the P20bn shelf registration of VLL.

China Banking (CHIB) settled 1 year ahead of schedule the 3-year $158mn Syndicated Loan that is originally set to mature June 2018. The settlement of loan was on the back of strong growth in foreign currency deposit. The loan was paid in two tranches: $60mn was paid in March of this year and the remaining balance on 29 June 2017.

Budget Secretary Diokno proposes trimming of the bureaucracy in two years, an appeal which is on third reading in the House and is certified urgent. This proposal aims to “right-size the organizational structures of all national government agencies, to simplify systems and processes, and to attain expediency in their front line services.”