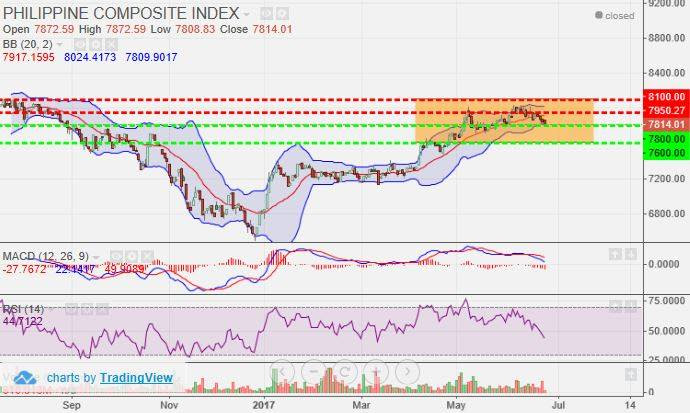 News Highlights: Manila North Tollways Corp. (MNTC), toll unit of Metro Pacific Investments Corp. (MPI) is planning to submit an unsolicited proposal of a P50bn expressway project. Meanwhile, the Bangko Sentral ng Pilipinas (BSP) is set to release a circular that would enhance reporting framework of the banks and will include heftier sanctions for those who will fail to comply.

Might rebound: Market might rebound as trading resumes after the long weekend break. Equities might firm up as some might find relief on slightly weaker crude stockpiles. Moreover, yesterday’s performance across Asia might spillover optimism on today’s local bourse. Immediate support is 7,780, resistance at 7,850.

Marts up: Regional marts grew buoyed by optimism on global growth outlook. Some markets were closed in observance of Eid’l Fitr. Muted trading: Markets were mixed with some hesitant to make big positions from oil’s current position.

Manila North Tollways Corp. (MNTC), toll unit of Metro Pacific Investments Corp. (MPI) is planning to submit an unsolicited proposal of a P50bn expressway project which will be built along C5 in Ortigas to Commonwealth, Quezon City. The said project is set to be submitted by July.

Metro Pacific Investments Corp. (MPI) proposes to build an expressway connecting Cavite, Tagaytay, and Batangas for P25bn, called the Cavite-Tagaytay-Batangas Expressway (CBTEX). This will be an extension of CALAx, which will start from Kawit, Cavite to SLEX-Mamplasan Interchange in Biñan, Laguna.

Ayala Corp. (AC) is looking to raise P30bn worth of debt securities under shelf registration to finance its fundraising initiatives. Previously, AC has used P20bn in shelf registration for its debt issuance in 2016. The company has set a P185bn capex program this 2017 for the expansion of its property, telco and water units, and ramp up operations in its other holdings.

The Bangko Sentral ng Pilipinas (BSP) is set to release a circular that would enhance reporting framework of the banks and will include heftier sanctions for those who will fail to comply. The circular will make it clear who is responsible for data reporting, and attest that the information provided and submitted is clear, accurate and in accordance with the BSP requirements.

Pursuant to RA7656 or the GOCC Dividend Law, GOCCs are required to remit at least half of their net profit to the Bureau of Treasure. Total unpaid dividends have reached P46.5bn from the PDIC, P29.87bn from PSALM, P20.66bnfrom NPC, P6.89bn from PCSO, and P6.31bn from CAAP.

Transportation Secretary Tugade says the Department of Transportation plans to loan from the Chinese government for its Manila to Bicol province railway project. The plan is to have a massive southern railway project split into The South Long Haul project, a P151bn train line spanning 581km through Laguna, Batangas, Quezon, Cam Sur, Albay and Sorsogon, and a short-haul component called the PNR South Commuter, a P134bn train line spanning 72km and linking Manila and Los Baños, Laguna.

Electricity prices to decrease from June to August:

ERC orders decrease in electricity price for 3 months, which will lead to a decrease of P285 in the electricity bill of a typical household, according to CitizenWatch secretary general Pangalangan. Consumers, however, are wary pending fee hike applications such as increase in FIT Rates by 10 centavos per kwh and National Grid Corp’s 15 petitions for rate increases to recover expenses from force majeure.