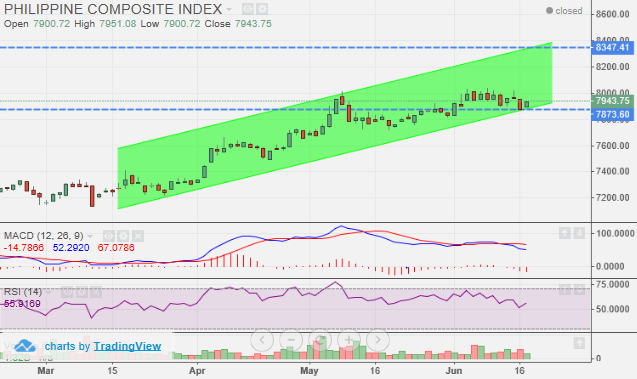 News Highlights: Metro Pacific (MPI) unit MPCALA Holdings broke ground for the construction of the Cavite-Laguna Expressway (Calax). Meanwhile, Manila Water (MWC) signed a joint venture agreement (JVA) with Calasiao Water District (CWD) for the design, construction, rehabilitation, maintenance, and management of the water supply system of CWD in Municipality of Calasiao in Pangasinan. On the economic front, the country's balance of payments (BoP) reverted back to deficit as it registered $59mn deficit in May.

Spillover gains: Wall Street overnight performance might spillover gains on our local bourse for today. However, investors might also opt to bag gains ahead of the central bank (BSP) meeting this Thursday. We still see the local mart on a sideways trend with no local catalysts in the horizon. Immediate support 7,900, resistance at 7,970.

Marts higher: Marts were broadly higher on Monday buoyed by the gains from Wall Street’s Friday performance. Hong Kong stocks led gainers as investors welcomed a plan for a new board to attract new economy listings.

Metro Pacific (MPI) unit MPCALA Holdings broke ground for the construction of the Cavite-Laguna Expressway (Calax). The loan agreement for this project amounting to P23.6bn is expected to be sealed before the end of the month. The groundbreaking marks the start of the construction work for the 18km Laguna segment of the Calax and is expected to be completed by 3Q or 4Q 2020.

Manila Water (MWC) signed a joint venture agreement (JVA) with Calasiao Water District (CWD) for the design, construction, rehabilitation, maintenance, and management of the water supply system of CWD in Municipality of Calasiao in Pangasinan. Under the agreement, MWC and CWD will own 90% or P23.76mn and 10% or P2.64mn of the JV company, respectively.

The Court of Tax Appeals (CTA) has ordered the BIR to issue tax credit certificate worth P761.06mn to San Miguel Brewery, Inc., a unit of San Miguel Corp. (SMC) for the excessive taxes collected in 2012 for its San Mig Light brand. The brand was erroneously charged with additional amount of P5.08 per liter, as the court assessed that San Mig Light is a new brand with different ingredients.

DD to develop a serviced apartment:

DoubleDragon (DD) entered into an agreement to develop a 5-star luxury serviced apartment as the third phase of its DD Meridian Park in Pasay. Ascott-DD Meridian Park Manila will sit on a 5,567sqm lot within the 4.8ha. complex and is expected to have over 300 units. This project is slated for completion by 2020.

Wilcon Depot, Inc. (WLCON) is set to expand its footprint by building seven new stores for a total investment of P450mn. Three depots will be located in Mindanao, one in Visayas, one each in Northern and Southern Luzon. Each store will have an average size of up to 10,000sqm and will cost around P150mn each, excluding the inventory.

LMG’s parent firm Chemical Industries of the Philippines (CIP) will sell 65.89% of LMG to Newmanholdings Inc., who is now ready to acquire 34.11% of LMG’s common shares for P2.97/share. LMG is engaged in the trading of industrial chemicals like caustic soda and sulfur, with authorized capital stock at P200 mn as of May 2017

BoP posted $59mn deficit in May:

The country's balance of payments (BoP) reverted back to deficit as it registered $59mn deficit in May. This figure reversed the $241mn surplus booked in the same period last year as well as the $917mn surplus recorded in April.

Cement demand seen to double by 2021:

Cement industry is seen to expand by 12% yearly, from the initial 7% growth projection as the current administration plans to boost infra projects. Data from Board of Investments (BoI) showed that demand for cement in 2016 reached 25.96mn MT, with 24.37mn MT were locally produced. BoI will has included cement production on its Investment Priorities Plan (IPP) list for 2017.

In a bid to meet the expected annual growth of 12% (previously 7-8%) for cement, the Board of Investments (BOI) will soon grant incentives such as income tax holidays to cement manufacturing through the investment priorities plan (IPP). This would be under the condition that the interested company must have an integrated plant, whose line of production would have an estimated cost of USD250-600 million.