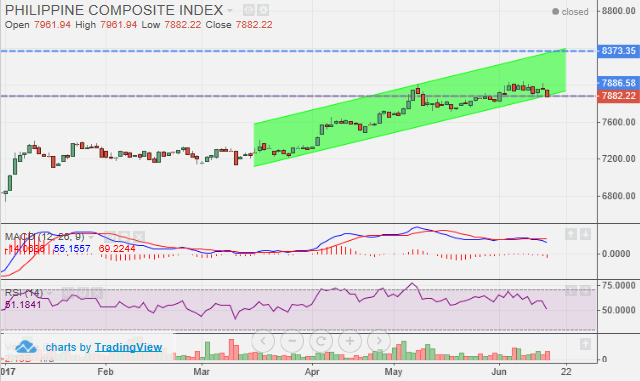 News Highlights: Aboitiz Power (AP) gets go signal from SEC for the issuance of up to P30bn fixed-rate retail bonds, which will be issued in tranches. Megaworld (MEG) is ramping up its presence in Luzon with the allocation of around P10bn capital spending in Pampanga, Cavite, Rizal, Batangas and Laguna. Meanwhile, foreign debt declined by $3.8bn to $73.8bn for Q1 according to central bank (BSP) data.

Might trade with modest gains: Our local bourse might trade slightly higher after a mixed finish from Wall Street. The investors will closely monitor further development from the upcoming Monetary Board (MB) meeting in 22 June. Immediate support 7,850, resistance 7,930

Crude inched higher despite oversupply concerns: Oil prices were higher despite concerns from OPEC-led decision to curb oversupply. Kazakhstan, a non-OPEC producer, decided to reduce output for June and July after overproducing during the past three months. West Texas Intermediate (WTI) edged higher by $0.28 to close at $44.74/barrel.

Aboitiz Power (AP) gets go signal from SEC for the issuance of up to P30bn fixed-rate retail bonds, which will be issued in tranches. The 1st tranche will be equivalent to P2bn, with an oversubscription option of another P1bn.

Megaworld (MEG) is ramping up its presence in Luzon with the allocation of around P10bn capital spending in Pampanga, Cavite, Rizal, Batangas and Laguna. This includes the construction and completion of more residential, office, commercial and hotel developments in Twin Lakes near Tagaytay and Southwoods City in Cavite-Laguna, as well as for land development in Capital Town in San Fernando, Pampanga and in Eastland Heights in Antipolo, Rizal.

ERC approved the application of Atimonan One Energy Inc. to construct a point-to-point facility to be able to connect the 1,200MW coal power plant in Quezon to the new Pagbilao substation of NGCP. ERC directed the company to pay the permit fee with the condition that NGCP will operate the facility. Atimonan One is controlled by Meralco (MER) subsidiary, Meralco PowerGen Corp.

Cebu Landmasters (CLI) had its ground-breaking ceremony for its office tower, Latitude Corporate Center. This project, a 50%-50% joint venture partnership with Borromeo Bros. Estate, is a 24-storey modern office tower located at Cebu Business Park which caters to BPO tenants, enterprise and executive tenants. Since November 2016 launch, it has already sold 83% of its inventory. Latitude is expected to be completed on the 4Q19.

MRC Allied, Inc. (MRC) diversifies into the energy sector as it targets to put up at least 1,000MW of renewables in the next 5 years. MRC officials said that with the rising demand for electricity and increasing target of renewable energy (RE) capacity and opportunity to buy existing plants, this is the ‘perfect time’ to venture into the sector. MRC has an aggregate of 160MW solar capacity in their pipeline for this year.

Foreign debt declined by $3.8bn to $73.8bn for Q1 according to central bank (BSP) data. The decline in external debt was due to net principal payments by public and private sectors, previous periods’ audit adjustments due to late reporting and negative foreign exchange revaluation adjustments.

The government has decided to defer the unsolicited proposals for new airports as it focuses on measures that would immediately decongest Manila. The two proposals that were put on hold are Asia Resources Reclamation (ARRC)'s international airport, seaport as well as a mixed-use development on reclaimed land off the coast of Sangley Point in Cavite and San Miguel (SMC)'s new international airport in Bulacan. Unsolicited proposals for the Clark Airport were also put on hold.

The central bank (BSP) sees a 4% growth in remittances for this year amid improving trade and rosy outlook in global economies. The growth would translate to $28bn worth of remittances from the record of $26.9bn in 2016.

SEC Chair Teresita Herbosa, a member of the Anti-Money Laundering Council (AMLC), said that the P5mn threshold for casinos is too high and should be lowered to cover more suspicious transactions. She said that the country may still risk being included again on the grey list of the Financial Action Task Force (FATF), a Paris-based anti-money laundering group.