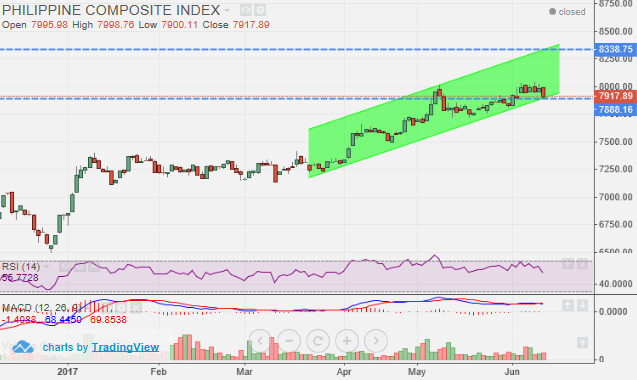 News Highlights: San Miguel Corp. (SMC) plans to build a petrochemicla refinery worth P1tn, with construction possibly starting in the next six months. San Miguel Corp. (SMC) is looking to earn P65bn in net profits as the conglomerate's income came mostly from its traditional businesses, such as food & beverage, and oil refinery.

Mart might trade higher: Local mart is expected to regain some of the losses it posted yesterday as investors are seen to reposition their holdings in anticipation of a Fed interest rate hike decision tomorrow. Gains in the financial sector and in other stocks that could benefit from a rate hike might be apparent. Immediate support 7,890, resistance 8,000.

Crude gained as government data is expected to reveal a decline in oil production. West Texas Intermediate rose $0.38 to settle at $46.46/barrel.

San Miguel Corp. (SMC) is looking to earn P65bn in net profits as the conglomerate's income came mostly from its traditional businesses, such as food & beverage, and oil refinery. However, the conglomerate's infra projects are seen to contribute to the company's profitability by 2020.

TEL expects to save P7bn from manpower:

PLDT, Inc. (TEL) sees a P7bn savings from its planned manpower cut in its IT department over the next 5 years. TEL aims to sign relevant agreements with IBM by the end of June, as it plans to outsource the bulk of its back-office information technology (IT) operations to IBM Philippines.

Cebu Landmasters (CLI) acquired a P150mn property in Bacolod as it plans to develop a mixed-use project. CLI entered a deed of absolute sale with Sta. Clara Estate, Inc. for a 1ha property. CLI made a P127.5-million payment to Sta. Clara Estate upon signing of the agreement with a 15% retention fee. A portion of its IPO proceeds were used for financing.

According to the central bank (BSP), Foreign Direct Investments (FDI) rose by 16.6% to $1.6bn in 1Q amid country’s attractiveness to foreign investors and strong fundamentals. Equity capital investments reached a net inflow of $101mn, lower than $550mn recorded a year ago, while net investments of debt instruments more than doubled to $1.3bn. The sustained FDI reflects investor’s confidence in the domestic economy.

The Bureau of the Treasury (BoT) awarded in full the 10-year reissued Treasury bonds (T-bonds) as investors preferred the longer tenor debt papers. Bids for the P15bn offering reached P29.5bn, while yields fetched 4.692%, 5.8bps lower than the 4.75% coupon rate.