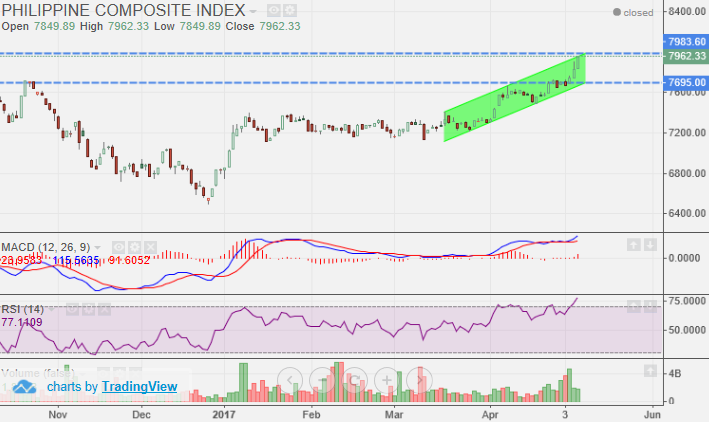 Upside from better market conditions, PSEi @7,962: With improving economic conditions and good earnings results from local firms, market showed strong upticks on the first trading day of the week. PSEi climbed 120 points to 7,962 (+1.53% day-on-day), with property leading sectoral gains (+2.97), followed by services (+1.83%) and mining/oil (+1.58%). Among actively traded shares were: ALI (+P1.70 at P38.40); SM (+P3 at P777); and BDO (+P0.90 at P123.90) on P9.4bn turnover. Gainers-losers scored 116-81, while net foreign buying reached P681mn.
Might test 8,000 level: Market might want to re-test its strength to breach the 8,000 mark on account of better market conditions locally and globally. However, some might also opt to bag gains after the local bourse exhibited strong consecutive gains. Albeit there is still much optimism on how the market would move as the administration pursues its plan to ramp-up in infra spending. Immediate support is 7,890, resistance at 8,020.

Macron win lifted most Asian marts: Regional marts got a boost from the latest turnout of the French elections favouring Macron. His market-friendly approach gained traction against his far-right rival, Marine Le Pen. On a side note, good earnings reports provided much upside for investors’ sentiment, while stocks in China bucked the regional’s trend amid concerns on tighter market supervision.

Equities merely gained with the lack of catalysts: Shares showed minimal upward movement as investors struggle to find new catalysts to push the markets higher with geopolitical tensions stepping down from the limelight. Moreover, Emmanuel Macron’s win in the French elections did not stir much action as this was already widely expected.

Crude up on output cut optimism: Crude futures eked out gains as comments from OPEC signaling an extension on their output cut agreement provided a slight relief on the market.

Ayala Land, Inc. (ALI) reported P5.56bn net income for Q1, 18% higher YoY on the back of higher revenues. Revenues increased by 17% to P31.6bn as revenues from property development were 20% higher at P20.8bn, while revenues from leasing increased by 9% at P7bn. For 2017, ALI is looking to launch P117bn worth of projects, where P100bn will comprise of residential projects.

Petron Corp. (PCOR) posted Q1 net income at P5.6bn, doubling the P2.8bn recorded in the previous year. Earnings from Philippine operations grew by 69% YoY to P4.1bn, accounting for about 74% of the total. Meanwhile, income from Malaysia operations surged 335% YoY to P1.5bn. Consolidated revenues increased by 38% YoY to P106.4bn.

China Banking Corp. (CHIB) announced that it has successfully completed its stock rights offering (SRO) of common shares following the 05 May end of offer period. The proceeds will be used to increase loan portfolio, expand branch network, among others. The additional shares from SRO will be listed on 10 May.

The Bureau of the Treasury (BoT) received P17.5bn bids of 91-day treasury bills (T-bills), which has an offering of P6bn. Yields fetched an average rate of 2.205%, 9.4bps lower from the 2.299% set during the previous auction. For the 182-day T-bills, bids for the P5bn offering reached P7.5bn, while yields reached 2.602%. Lastly, the 364-day T-bills received P9.5bn, while yields were 2.3bps lower at 2.966%. The preference on the shorter term T-bills reflects the sentiment on the upcoming FOMC meeting, where the Fed posed a hawkish stance ahead of 13-14 June meeting.

President Duterte has appointed Nestor A. Espenilla, Jr. as successor of Amando M. Tetangco, Jr. once the latter steps down in July. Espenilla had 35 years of central bank experience under his belt and currently heads the Supervision and Examination Sector of the Bangko Sentral ng Pilipinas (BSP). He initiated the rollout of National Retail Payments System.

President Duterte appointed retired general Roy Cimatu as acting Department of Environment and Natural Resources (DENR) secretary. He assumes the acting role as he would still be subject to confirmation. Currently, Cimatu is the country's special envoy to the Middle East. The industry welcomed Cimatu's appointment with cautious optimism, and whether Gina Lopez's previous decision to close or suspend mines would be reversed.