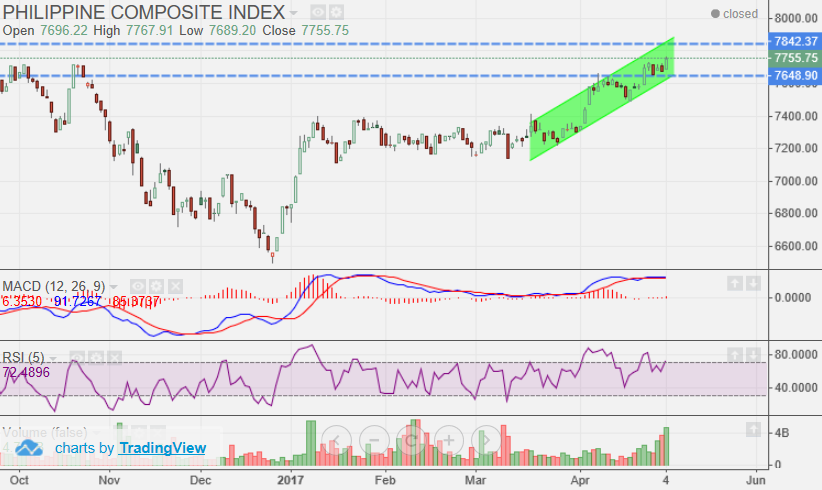 News Highlights: Aboitiz Equity Ventures' (AEV) core net income grew by 5% to P5.1bn in the 1Q on the back of higher contributions from its business segments. Aboitiz Power (AP) core net income only grew by 4% to P5bn in 1Q, narrowed by the increased interest expense and depreciation. EBITDA posted a 16% gain to P10.7bn. Meanwhile, the central bank (BSP) said that there's more room to keep its accommodative monetary policy stance following the US Fed Reserve's to keep interest rates unchanged.

Mart up on hawkish Fed, PSEi @7,755: Local mart rallied after the US Fed decided to keep its interest rates unchanged, but maintained its hawkish stance moving forward. PSEi jumped 73 points to close at 7,755 (+0.96% day-on-day), with all sectors ending in gains, save for mining and oil (-0.26%). Among actively-traded shares were: ALI (+P0.40 at P35.90); URC (+P4.10 at P178.30); and JGS (+P1.60 at P85.00), on P7.53bn turnover. Gainers continue to dominate losers at 116-80, with net foreign buying sustained at P22mn.
Might take profits: We might see the mart cooling off a bit as investors bag their profits coming from the latest surge in equities. As first quarter earnings continue to trickle in, investors might reposition their portfolios toward the companies that sustained its strong momentum from the previous period. Immediate support 7,670, resistance 7,820.

Bourses mixed on Fed’s hawkish statement: Bourses across the region ended mixed as investors digest the decision of US Fed to maintain policy rates, but hinted a hawkish stance.

Equities flat ahead of jobs data: Shares closed relatively unchanged as commodities were hit stemming from the latest crude price plunge. On the economic side, investors will monitor the release of jobs data as jobless claims declined to 238,000 from the last week of April.

Crude down on continued glut: Oil prices dipped as US crude output continues to rise, putting the market in limbo despite the OPEC agreement to cut output. However, investors are optimistic that the deal will be extended on OPEC’s meeting on 25 May. West Texas Intermediate shed $2.30 to close at $45.52/barrel.

Aboitiz Equity Ventures' (AEV) core net income grew by 5% to P5.1bn in the 1Q on the back of higher contributions from its business segments. AEV incurred a non-recurring losses of P442mn on forex losses recognized upon revaluation of dollardenominated liabilities and mark-to-market losses on derivatives. With these one-off losses, net income amounted to P4.7bn (-7% YoY).Its power unit, Aboitiz Power (AP) remained its largest contributor at 67% , while income contribution of the Financial Services, Food, Infrastructure and Real Estate unita were at 22%, 6%, 4% and 1%, respectively.

Aboitiz Power (AP) core net income only grew by 4% to P5bn in 1Q, narrowed by the increased interest expense and depreciation. EBITDA posted a 16% gain to P10.7bn. AP recognized a non-recurring loss of P577mn from forex losses on the revaluation of dollar denominated liabilities and mark to market of derivatives. These one-off losses brought its net income to P4.4bn (-13% YoY).

ABS-CBN Corp. (ABS) filed a $40mn lawsuit against 22 pirate web sites, accusing them of illegal streaming of its television shows and movies. The domains, which include cinesilip.net, pinoychanneltv.me, teleserye.me, pinoychannel.co, and pinoytvreplay.ws, have now been blocked and shut down.

The central bank (BSP) said that there's more room to keep its accommodative monetary policy stance following the US Fed Reserve's to keep interest rates unchanged. BSP said that the country's inflation remains within the 2%-4% target set despite some uptick seen over the past few months. The next rate-setting meeting of the BSP’s Monetary Board is scheduled on May 11.

The Board of Investments (BoI) granted tax incentives to Altipeak Land Development's P62.4mn Casa Coco Hotel project in San Juan, Siquijor and Ecohotel's P29.1mn Eco Container Hotel in Tagaytay City. The projects are now entitled to income tax holiday incentive of up to six years and additional deduction from taxable income equivalent to 100% of expenses incurred in the development of necessary and major infrastructure facilities.

Phil. Amusement and Gaming (PAGCOR) signed a provisional license agreement for a $300mn Lapu-Lapu Leisure Mactan integrated resort and casino owned by Udenna Development Corp. Dennis Uy's Udenna will build the integrated resort and casino on a 12ha. prime beachfront property at the Punta Engaño peninsula in Mactan Island, Lapu-Lapu City. The construction of this project will start in 3 months and is lated for completion by 2022, with the casino, retail complex and hotels set to open as early as 2019.

The government may exclude Davao Airport from the regional projects line-up under the publicprivate partnership (PPP) program and undertake development first. The PPP project involves the development, operations and maintenance of the five regional airports such as Davao, Laguindingan, New Bohol (Panglao), Bacolod and Iloilo. During the previous administration, the government had pre-qualified the following groups to bid for the project: Philippine Airports Consortium, Maya Consortium, GMR-Megawide Consortium, San Miguel Holdings Corp.-Incheon International Airport Corp. Consortium, and Filinvest-JATCO-Sojitz Consortium.