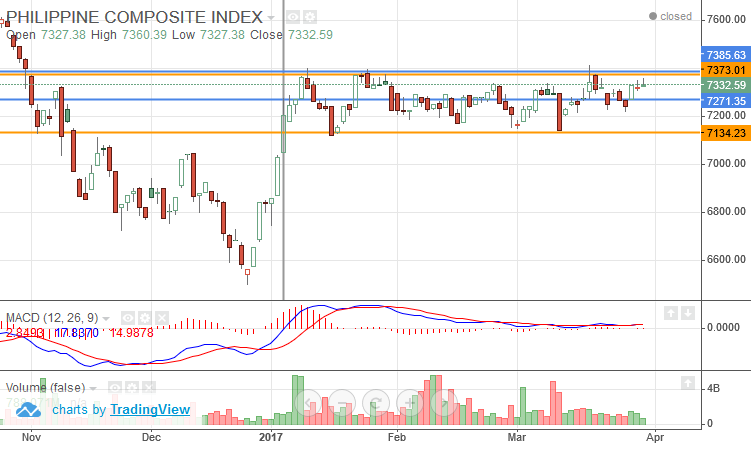 News Highlights: Ayala Corp. (AC) and SM Investments (SM) are teaming up for the development of a P25bn elevated 8.6-km, 4-lane Circumferential Road 3 (C3) Expressway that will link SM Mall of Asia complex in Pasay to Sta. Mesa, Manila through Makati CBD. Meanwhile, San Miguel (SMC) lines up $33.6bn worth of investments in oil refinery, integrated steel mill and ocean-tide power plant targeted to be completed within three to five years. On the economic front, the country’s net liabilities rose to $30.6bn at end-2016 on account of a decline on external assets and liabilities amid global economic uncertainty.

Mart drops, WLCON shines in debut: Local mart dipped further as WLCON gained on its first trading day. PSEi finished 20 points lower to close at 7,311 (-0.29% day-on-day), with all sectors in the red territory, save for services (+1.32%). Among actively traded shares were: WLCON (+P0.28 at P5.33), SM (+P1.00 at P687.00) and BDO (-P0.90 at P117.60), on P9.18bn turnover. Losers outpaced gainers at 79-65, with net foreign buying at P4.64mn.
Might take cue from US losses: Local bourse might trade lower, following the weak finish of Wall Street from the previous week. Also, investors would monitor the geopolitical tension arising from President Trump’s unilateral stance on North Korea, ahead of his meeting with President Xi Jinping in Florida. Immediate support 7,270, resistance 7,375.

Bourses mixed ahead of Trump and Xi meeting: Bourses in the region closed mixed as investors await the meeting of President Trump and Chinese President Xi Jinping at the Mar-a-Lago. Also, President Trump is set to release two executive orders that would address trade deficit and tariffs.

Crude up on optimism to extend output cut deal: Oil prices inched higher on the revived optimism that OPEC and Russia would agree to extend the deal to cut oil production. West Texas Intermediate for May added $0.25 to settle at $50.60/barrel.

AC and SM team up for P25bn elevated toll road:

Ayala Corp. (AC) and SM Investments (SM) are teaming up for the development of a P25bn elevated 8.6-km, 4-lane Circumferential Road 3 (C3) Expressway that will link SM Mall of Asia complex in Pasay to Sta. Mesa, Manila through Makati CBD. The two conglomerates, through their wholly owned subsidiaries, submitted a joint unsolicited proposal to the DPWH. C3 Expressway is expected to obtain the approval of NEDA by 2Q18.

SMC not keen on another tollroad:

San Miguel (SMC) turned down the invitations of Ayala and SM groups to participate in a P25bn elevated tollroad project as it would only duplicate and siphon motorists and revenues away from its own tollways. According to SMC, this would counter its NAIA Expressway for which they paid the government a P11bn premium.

SMC to invest in 3 big projects; to bid for Saigon Brewery:

San Miguel (SMC) lines up $33.6bn worth of investments in oil refinery, integrated steel mill and ocean-tide power plant targeted to be completed within three to five years. SMC is studying the construction of an oil refinery with an output of 250,000 barrels/day, while producing petrochemicals and aromatics. SMC is already in talks to acquire a property for the integrated steel mill project. Meanwhile, SMC looks into venturing into power development using ocean tidal energy, a first attempt for power firms in the country. In other news, SMC are evaluating the deals as it plans to join the public bidding of Vietnamese government for the sale of Saigon Alcohol Beer and Beverages Corp., Vietnam’s leading beer producer.

MPI in talks with foreign partners:

Metro Pacific Investments (MPI) is in talks with a new foreign partner for the regional airports of the government under public-private partnership scheme. This was after its French partner pulled out if the consortium. Recall that the administration unbundled the 5 airport projects to hasten the completion of the selection awarding process.

SM Investments Corporation (SM) has completed the acquisition of a minority stake in 2GO Group, Inc. (2GO) through a 34.5% stake in its parent company. 2GO is the largest integrated supply chain operator in the Philippines whose businesses include shipping, freight forwarding, warehousing, and expert delivery services.

Jollibee Foods (JFC) unit, Golden Plate Pte. Ltd. (GPPL) entered into a 1mn euros joint venture agreement with Blackbird Holdings Pte. Ltd. (Blackbird) to own and operate the first Jollibee store in Italy. The joint venture will 75% owned by GPPL and 25% will be from Blackbird. Blackbird is a Singapore company, holding various investments both in Singapore and in the Philippines in the F&B, Human Resource, Agriculture and Biotechnology sectors.

Bodegas Las Copas S.L., a 50-50 venture of Emperador-led (EMP) Grupo Emperador Spain and Gonzales Byass, completed the acquisition of Domecq and Pedro Domecq brands from Pernod Ricard for €80.9mn (P4.3bn). This would pave way for EMP’s access to the brandy market in Latin America, especially in Mexico. The acquisitions will be financed through a combination of cash on hand and external financing.

Filinvest Development Corp. (FDC) reported a net income of P8.5bn for full year 2016. This was 21% higher YoY and largely due to the growth of its banking subsidiary, East West Bank (EW). Recall that EW earlier announced its 2016 profit at P3.4bn, +70% YoY. FDC’s consolidated revenues grew 19% to P58.6bn and the main contributors were banking (with 41% share) and real estate (39% share). Power, sugar and hotel businesses accounted for 13%, 4% and 3% of revenues, respectively.

Country’s net liabilities rose to $30.6bn at end-2016 on account of a decline on external assets and liabilities amid global economic uncertainty. The international investment position as of December 2016 was 12.4% higher than end-September’s $26.8bn.

REIT may take off only when the tax reform package is approved:

During the 5th Asia Pacific Real Estate Investment Summit Philippines, the PSE said that the amendment to the implementing rules and regulations of the REIT Law may not move forward until the tax reform package is passed. The tax reform package is seen to close some leakages and effectively generate more tax collections. Meaning, any loss from the removal of the VAT in the REITs will be covered.