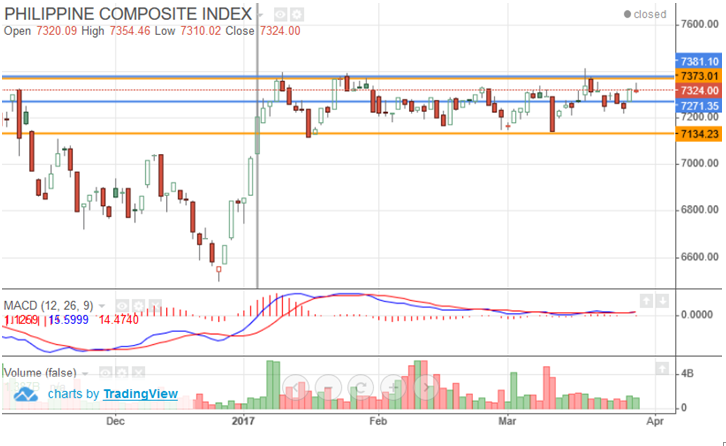 Mart down despite upbeat sentiment in US: Local mart gave up early gains, defying upbeat sentiment from Wall Street. PSEi fell 7 points to close at 7,324 (-0.10% day-on-day), with most sectors ending in red, primed by financials (-0.60%). Among actively-traded shares were: SMPH (unch at P28.50); SM (+P13.50 at P694.00); and BDO (-P1.70 at P119.80), on P14.89bn turnover. Losers outnumbered gainers at 107-79, with net foreign selling at P6.0bn.
Might recover modestly: Local mart is seen to recover some of the losses it posted yesterday, but in a modest note as investors are likely to maintain a liquid position in anticipation of Wilcon Depot's (WLCON) initial public offering tomorrow, 31 March. Immediate support 7,280, resistance 7,360.

Bourses mixed despite optimism in US: Marts ended mixed as some investors focused on better-than-expected economic data releases from the US, while others were reluctant to make any big bets.

Ayala Corporation’s (AC) wholly-owned subsidiary, AYC Holdings Ltd. through AC International Finance, will transfer its 50.6% ownership in Integrated Micro-Electronics (IMI) to AC Industrial Technology Holdings, Inc. via block sale of IMI shares of the mandatory tender offer rules by SEC on 21 March. AC Industrials, a wholly owned subsidiary of AC, holds its interests in automotive distributorship. The move will consolidate AC’s existing assets in manufacturing and vehicle distribution and dealership under AC Industrials. The transaction will have no impact to AC’s consolidated financial statements as this is just a transfer within the Group from one wholly owned subsidiary to another.

AC Energy Holdings Inc., subsidiary of Ayala Corp. (AC), is looking to expand footprint in Vietnam citing the similarity of macroeconomic structure with the Philippines. Currently, Manila Water Co. (MWC) is in partnership with local water providers Thu Duc Water and Kenh Dong Water. AC Energy would tag along a local partner that could present good projects and technology, be it in energy, gas or coal.

Cebu City Regional Trial Court Branch 18 has directed Cebu City Mayor Tomas Osmeña from closing any BDO Unibank, Inc. (BDO) branch. Also, Judge Gilbert Moises has advised the mayor to refrain from issuing any statements in the media. The bank disclosed that it has submitted all the required documents needed by the City Government.

CHP teams up with Sinoma for power facility:

Cemex Holdings (CHP) unit, Apo Cement, signed an accord with Sinoma Energy Conservation Ltd. of Chna to build and operate a waste-heat-to-energy facility. The planned 4.5MW facility would have a capacity to capture excess heat from the cement plant’s kiln and convert it into usable energy, expecting to generate 25,000 MW-h annually. CHP operates 2 cement facilities, namely, Apo Cement in Cebu and Solid Cement in Rizal, with an aggregate installed annual capacity of 5.7mn tons of cement.

Century Pacific Food (CNPF) recorded its 2016 net income at P2.66bn (+37% YoY), accounting its continued revenue growth and consolidation of recently acquired coconut subsidiary. Revenues rose to P28.3bn (+21%) on the back of the growing coconut exports business. CNPF saw a sustained recovery in demand for original equipment manufacturer (OEM) tuna exports during 4Q, with revenues in that segment ending the year with positive growth. Amid rising commodity prices, CNPF hopes its efforts would strike a balance between growing demand and improving liquidity for 2017.

The debt of the national government rose to P6.208tn as of end-February as the peso continues to weaken against the dollar. The Bureau of the Treasury (BoT) report showed that domestic debt accounts for P3.99tn, while foreign debt is at P2.22tn.

Fitch Ratings, Inc. (Fitch) has affirmed BBB- credit rating on the Philippines, a notch above investment grade, on the back of strong GDP growth. The credit rating issuer also cited the strong macroeconomic performance despite the political noise surrounding the Duterte administration. On the other hand, S&P Global Ratings (S&P) raised its growth forecast for the Philippines coming from the robust BPO sector. S&P's growth outlook for the Philippines has been upgraded to 6.6%, higher than the 6.4% estimate in January.

Ramon Monzon is set to take over the exchange (PSE) by 01 April, a month before the annual stockholders meeting. Monzon has been an incumbent independent director at the PSE since 2015 and chairs its audit committee. The incoming PSE chief is said to have not signed up for a long-term management contract as the contract is set to be renewed on a yearly basis.